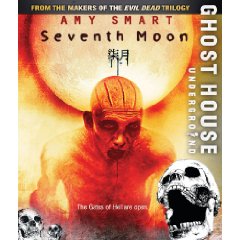 Ghosthouse released eight films the prior year (similar to the horror fest releases) and a handful of them were very good or simply weird and therefore good as a result. I purchased and chose them based off reviews from various horror sights. This year, Ghosthouse again has released four more films here in 2009.

The first half of the film we find out our couple are on their honeymoon in China. The husband’s family is of Chinese ancestry and he has various family still there. During their time there, a festival of the seventh moon is occurring in which superstition says that the dead are freed from hell on the seventh full moon of the year. As with our Halloween, this festival is a bit similar though more a fair/carnival feel. Anyways, after their fun in the city they head out with their tour guide to the rural section of China to visit the husband’s relatives. The trip takes much longer than expected and by the time the tour guide gets lost, it is already dark as night and out in the farms/hills of rolling China, there are no street lights. Eventually they come to a darkened village and the tour guide decides to go ask one of the town folk where they are. This is the beginning of the setup for our movie.

I was not too fond of the shaky-cam feel of the film here with ‘Seventh Moon’. It works well in some films while in this one it just becomes too much of a headache. Another issue that I had with the filming was how dark the film came off even though shot in high definition. It really takes away from the atmosphere that is so ever creepy in this movie. Even though I found the camera and darkness not to my liking, the story was pretty good and had its shocks and scares. The rural part of China and the items used to make suspense worked unbelievably well like a wind chime and animals crying in the darkness really add to the creep factor. When things are heating up, the film takes a nose dive towards the end which left me disappointed.
Movie Quality: 6/10

The print is presented in 1080p/AVC MPEG-4 with a 1.78:1 aspect ratio. Colors look good providing a solid color palette. Black levels are also fine, yet do not stand out. Flesh tones are accurate and natural. I did notice some print issues throughout the film, but they weren’t anything that became overly distracting. There is some subtle grain throughout helping fit in with the film’s overall feel and tone.
Video Quality: 6/10

The audio is presented in DTS-HD MA lossless 5.1 mix. This is not a mix that will blow you away, but the rears do provide several moments of excellent sounding effects. The dialogue is clean and clear through the center channel. This is a well balanced mix.
Audio Quality: 7/10

I did not enjoy ‘Seventh Moon’ as much as I had hoped which is a shame since it was starting out rather decent. If you are a fan of the Ghosthouse films, this is worth taking a look via rental. On Blu-ray I was disappointed by the image quality which should have been better.
Overall Rating: 6.5/10