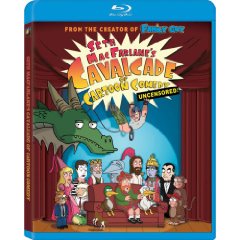 From the creator of Family Guy and the co-creator of American Dad! Comes a brand-new animated series of pop culture parodies, skewered stories, and fabulously filthy fun nuggets. Uncensored, uninhibited and unbelievably hilarious, Seth MacFarlane’s Cavalcade of Cartoon Comedy is brimming with the kind of raunchy, twisted humor you can’t see on television no matter how hard you try. So sit back, veg out and enjoy the show. The possibilities are endless…and so are the laughs!.

Well, this is basically 54 minutes of shorts with nothing but dirty thoughts on its mind. Each segment runs under a minute with a few exceptions.  I would say that I was pretty disappointed. I expected the same type of zingy high-cultural context humor you get from the little snippet scenes from Family Guy, but this fell short in a big way. There were many shorts on here that ended with me saying what kind of crap was this released on a digital disc. I would say of the 50 or so shorts, I thought maybe 5 at the most were pretty funny.

It seems the Mcfarlane’s writing stlye is just a stream of consciousness that bounces from the years of pop culture cultivated in his brain. My recommendation is that you forget this Blu-ray even exists as you’ll very likely regret wasting both 54 minutes of your life and the money you spent.
Movie Content: 3/10

The print is presented in 1080p/AVC MPEG-4 with a 1.33:1 aspect ratio. The shorts are kept in their original aspect ratio. WOW! This image is so underwhelming, I wonder as to why this film was released in high definition. The color presentation is very dull looking. There are all kinds of issues with the print itself carrying dirt and banding.
Print Quality: 4/10

The audio is presented in DTS-HD MA lossless 5.1 mix. If you thought the video was underwhelming, the audio is even worse. This audio presentation doesn’t have much coming from the rears. Dialogue is clean, but its on the lower side which turns into a disappointment.
Audio Quality: 3/10

This is the first review of a film on this site that I have given such a terrible score too. I wouldn’t recommend this film to my worst enemy.
Overall Rating: 3/10