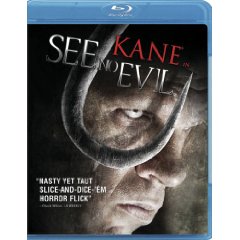 Seven feet tall. Four hundred pounds. A rusty steel plate screwed into his skull and razor-sharp fingernails that pluck out his victims’ eyes. Reclusive psychopath Jacob Goodnight is holed up in the long-abandoned and rotting Blackwell Hotel, alone with his nightmares until eight petty criminals show up for community service duty along with the cop who put a bullet in Jacob’s head four years ago. When one of their own is kidnapped by the killer and her fate uncertain, the remaining lawbreakers must fight this indestructible force of nature who has a violent score to settle.

A gory, classic-style ‘stalk-and-annihilate’ horror movie starring massive pro wrestler Glen ‘Kane’ Jacobs as silent, hulking psychopath Jacob Goodnight, See No Evil isn’t quite the movie it seems to have wanted to be – i.e. it didn’t create a new Jason Voorhees/Freddy Krueger-level icon for horror (although who knows what a couple sequels might do?) – but it did create a solid entry into the slash subgenre that fans will certainly want to check out. Armed with a heavy, hook-ended chain that he swings around to wreak all sorts of carnage; and possessed of a dislike for being looked at, that motivates him to rip victims’s eyes out of their sockets, Goodnight is a known serial killer who for the last couple of years has been holed up inside a derelict old building. When a team of young convicts (mostly low-level crimes, including a cute female animal rights activist arrested for liberating a passel of lab animals; plus a couple of really unlikable nastier criminals) are sent, along with correctional officer chaperones, to the old building to clean it up as part of work release rehabilitation, the building’s tenant has a fresh supply of targets. Also in the mix is the cop who nearly brought Goodnight down a couple of years previous.

Overall though, “See No Evil” delivers a fine movie with an adequately distinctive – and visually memorable – villain, some very visually memorable female cast members (even though the characterization in some cases could have used work), good special effects, and a good working of angles in the last fifteen minutes or so that, while not a twist ending, suddenly adds a more interesting and tragic aspect to Jacob. I wouldn’t at all mind seeing this story continue on with a sequel or too. For those who only dip into horror occasionally, See No Evil isn’t really the best choice. But those who love horror movies – especially if that includes ones like Friday The 13th, Nightmare On Elm Street and Texas Chainsaw Massacre – are likely to really enjoy See No Evil despite a couple of shortcomings.
Movie Quality: 8/10

The print is presented in 1080p/AVC MPEG-4 with a 1.78:1 aspect ratio. Colors are deep and well saturated throughout the entire presentation. Blacks are strong. Nowhere did the image ever appear soft with such strong colors and black levels. Flesh tones were also natural. There is some subtle grain in a few scenes, but never a distraction.
Video Quality: 9/10

The audio is presented in DTS HD MA lossless 5.1 mix. This is a very aggressive mix in the soundfield being in use at all times. The surrounds get all kinds of action from sound effects, the soundtrack, action scenes, voices, and the score brings this film to life. Dialogue is clean and crisp with no real issues.
Audio Quality: 9/10

All features presented here are available in standard definition, but I was surprised at the amount that were provided.

‘See No Evil’ is a creepy movie that has a lot of blood splatter in it. Kane actually plays his role well and I would love to see another sequel released down the road based off his character. On Blu-ray, the film looks and sounds really good as Lionsgate engineers always do an excellent job with catalog titles to high definition. This is worth a rental for those interested.
Overall Rating: 8.5/10