Season of the Witch Blu-ray Review 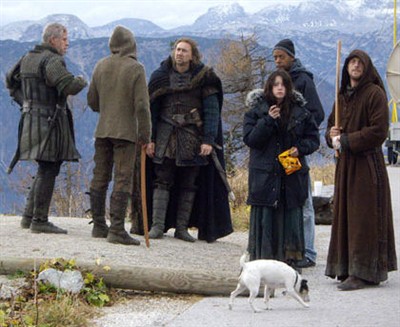 In a time when the mere accusation of witchcraft was often enough to send someone to the gallows, Season of the Witch slams you right into the middle of the devil-fearing, superstitious Middle Ages, where both the plague and finger-pointing run rampant. It’s in this loaded environment that two deserters from the Crusades are recognized when they chance going into a plague-ridden town, and are subsequently arrested and offered a simple choice by the local cardinal (Christopher Lee): rot in prison or escort an accused witch to an abbey where she will undergo trial. But rarely are such tasks as black and white as that. Former knights Behman (Nicolas Cage) and Felson (Ron Perlman) initially decline the offer, but after they encounter the young girl (Claire Foy) accused of witchcraft in prison, and see that she has been beaten, they agree so long as she is guaranteed a fair trial by the monks. The rest of their party consists of a young priest, a knight in mourning over the loss of his family, a merchant who knows the way through the forest, and an altar boy who wants nothing more than to be a knight. 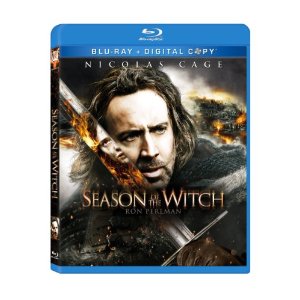 Season of the Witch is a movie that constantly dabbles in the art of being both good and bad; sort of like someone jumping from foot to foot over a bed of hot coals. Sadly, rather than end up on some soft ground to cool our heels with at the end, we never leave that bed of hot coals and our feet just simmer.

Any film that headlines Nicolas Cage supported by Ron Pearlman will instantly get me into a seat on opening weekend, as was the case here. Add the directorial talents of Dominic Sena (Gone in Sixty Seconds, Swordfish), and I’ll even buy popcorn or a six dollar drink to boot. So what was the problem?

The entire second act of the film was its strongest moment, which is good because it’s also the longest. There are some well acted scenes from the girl playing the witch (Claire Foy) who I hope to see more of. There’s also a harrowing journey through a creepy forest, over a decaying bridge, and even a nasty run-in with some wolves that are brought forth by dark magic.

But the acting of our two leads at times seems a bit flat and stale, and neither of them appears to really want to be there. I’m not at all overly quick to discredit them. The flow of the entire film complete with that bad dialogue, holes in the story, and weak plot points, strongly suggests that they didn’t have much to work with. It’s almost like they’re trying to maintain balance while standing in the middle of a soggy paper towel.
Movie Quality: 7/10

The print is presented in 1080p/AVC MPEG-4 with a 2:40:1 aspect ratio. Colors are excellent and stand out in this film especially being a part of the renaissance age. The color palette chosen here was for the style of the film. Blacks levels are good. There is some grain throughout the film that isn’t consistent. Details are also excellent. Some of the CGI can be a bit off at times, but is never a huge issue. This print is very close to being demo worthy and if it wasn’t for some of the mucky CGI, this film would get a perfect score.
Print Quality: 9.5/10

The audio is presented in a DTS-HD MA l0ssless 5.1 mix. This is a very atmospheric and immersive sounding film. The rears provide quite a few times where sound effects panned across the speakers. There are many scenes that are outside which also take advantage of the soundfield providing some dynamic sound. Dialogue is clean through the center sounding ever so crisp.
Print Quality: 9.5/10

This is a suspenceful movie that has a lot of action and tension. Throughout the film you will find yourself wondering if this girl is truly a witch or just a scapegoat to blame. I would only recommend this a rental.
Overall Rating: 7/10