Posted in DVD Reviews by George Theofanopoulos on 06 October 2010 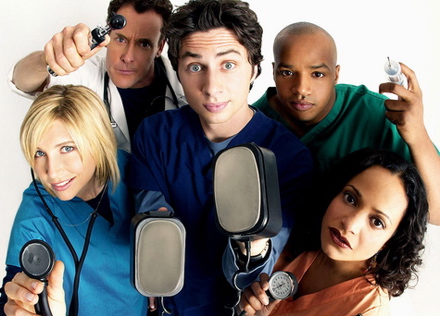 See how the story ends for J.D., Elliot, Turk and the rest of your favorite characters in ABC’s Scrubs: The Complete Ninth And Final Season. The heroes of Sacred Heart may have finished their rounds, but the laughs never stop as they mentor a brand new class of med students!

J.D. returns to teach at Sacred Heart’s medical school with the old gang and is surprised to find an impressionable young student has picked up where he left off. Meet Lucy and her classmates, Drew and Cole, as they try to fit in while they do their best to stand out. 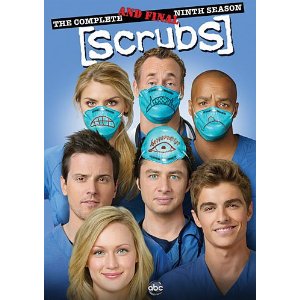 This television show suffered from two main problems, the first of these is that it carried on the name “Scrubs.” This is by far the worst decision ABC could have made regarding this show. In the same way Fraiser, Mork and Mindy, or countless other spin-offs created new titles for themselves while still keeping familiar characters this series needed to do the same. Do NOT buy this product if you are expecting the same brilliance that can be found in the first 8 seasons of this show. It is a different show all together, much as Bill Lawrence wrote on his blog about the show. People expecting the same characters and same relationships as before will find themselves sorely disappointed in the product, much as I am.

The second “unforgivable sin” which you will note that many other reviews (both previous and following this one) is the return of the characters and hospital name from the previous seasons. Bottom line is, JD is the heart and sole of all 8 seasons of Scrubs preceding this one. When you remove focus from his character, and the relationships he already established you lose the primary essence of this once great television show.
Adding to this, the relocation of the hospital and the retaining of some characters, though not many, is briefly glossed over in the first episode, in a way that says “the writers of the show couldn’t think of anything”, even an earthquake destroying the old building would have been preferable to the pass-and-glance attitude they give the new setting which, by the way, doesn’t fit at all into the reality constructed by the show and completely ruins the suspension of disbelief. (I mean Dr. Cox as friends with JD and Turk? Fundamental conflict just POOF!)

The bottom line is that that old characters and show name needed to be completely removed from the show all-together. As much as I love Dr. Cox’s rants, and JD’s fantasy sequences, they didn’t fit together coherently with the new cast. Oftentimes, what should be a transitional attempt seems like ABC bargaining with Zach Braff to be their TV show posterboy.

While I am sad to see the greatest show of the new millenium disappear from the silver screen, I must say I agree when people claim that Scrubs should have ended with Season 8 (in fact, it would’ve been nice if it had ended as originally planned with a full-lengthy season 7…stupid writer’s strike.)

Bill Lawrence once again put out a television show with great potential, however, people should hesitate before deciding to purchase this item.
Movie Quality: 8/10

I really wish they hadn’t called this season 9 and had just deemed it something like Scrubs: Med School or something. Overall the laughs are still there but more sparse and they still come from the same cast members, ie Cox, J.D., and Turk. Beyond that, it’s just a failed experiment. If you’re someone new coming to the show, you can skip this season and still get all you need from seasons 1-8.
Overall Rating: 8/10