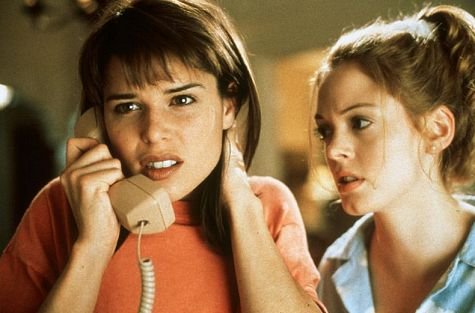 With the smash hit Scream, novice screenwriter Kevin Williamson and veteran horror director Wes Craven (A Nightmare on Elm Street) revived the moldering corpse of the teen horror picture, both creatively and commercially, by playfully acknowledging the exhausted clichés and then turning them inside out. Scream is a postmodern slasher movie, a horror film that cleverly deconstructs horror films, then reassembles the dead tissue, and (like Frankenstein’s monster) creates new life. When a serial killer starts hacking up their fellow teens, the media-savvy youngsters of Scream realize that the smartest way of sticking around for the sequel is to avoid the terminal behaviors that inevitably doom supporting players in the movies. They’ve seen all the movies, and the rules of the genre are like second nature to them. One of the scariest/funniest setups features a kid watching John Carpenter’s seminal Halloween on video. As Jamie Lee Curtis is shadowed by Michael Meyers and the kid on the couch yells at her to turn around, Craven reverses his camera and we see that the kid should be taking his own advice. The fresh-faced young cast (including Drew Barrymore, Neve Campbell, Skeet Ulrich, Courtney Cox, and David Arquette) is fun to watch, and their tart dialogue is sprinkled with enough archly self-conscious pop-culture references to make Quentin Tarantino blush. 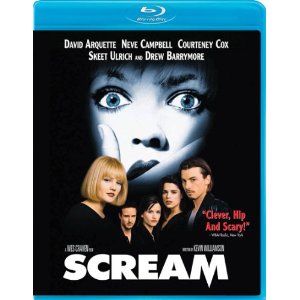 The opening sequence to this teenage slasher film is one of the most memorable scenes in Hollywood history. I know, that may seem like jumping the gun a bit, but it’s not; believe me.

Think about it; Drew Barrymore alone in a house when the phone rings right as she’s setting popcorn on the stove. She informs the caller that she’s getting ready to settle down and watch a scary movie. She loves scary movies. The caller is dark and mysterious yet surprisingly friendly, almost so smooth he’s inviting and so Drew (her name in the film is Casey) keeps talking to him. Then he starts to scare her. He lets her know he’s watching her and when she threatens to hang up he threatens her life. What follows may be one of the most intense scenes in the whole of horror films, and it remains one of the most memorable scenes ever filmed.

So begins a tale of murder in a small town as local students start dropping like flies. It’s the one year anniversary of the brutal murder of young Sidney Prescott’s mother and it seems that she is the next target. Her friends try and show her support, but things look even grimmer when her very own boyfriend appears to be the masked killer. Dealing with a killer on the loose seems like enough to get anyone frazzled, but Sidney also has to deal with local reporter Gale Weathers, who is obsessed with Sidney’s mother’s murder and is convinced that Sidney ID’d the wrong guy.

What is so amazing about `Scream’ is that it knows what its faults are and it exploits them. What writer Kevin Williamson and director Wes Craven have done is create a film that pokes fun at the horror movie stereotypes without ever falling into parody territory. This film is genuinely scary, but it never takes itself too seriously. It contains all the generic horror clichés but inserts its own array of twists to deliver a fresh take on a tired genre. This is the film that proved to be a rebirth for a genre that many had written off.

The cast is funny and entertaining, Matthew Lillard getting major points for creating an obnoxiously entertaining character that you wanted to see in every scene. Neve Campbell is a very pretty and very naturally charming girl who should have received a bigger career after this, and Skeet Ulrich has enough of a bad boy charm that you can see him as a suspect but hope and pray that he isn’t the killer. Jamie Kennedy didn’t impress me too much, and I’ve never really felt McGowan was a real actress; but they are serviceable. David Arquette is effective and Courtney Cox is brilliant (truly), but in all honesty, this movie belongs to Drew Barrymore, who in just merely five minutes cemented herself as the new scream queen!

The print is presented in 1080p/AVC MPEG-4 with a 2:35:1 aspect ratio. Finally it is about time that we get a version of ‘Scream’ that is anamorphic. Colors are rather strong in many scenes, yet there are times where they appear to be a bit dull. A very good example of that is the color red, when blood splats on the floors, walls, and in the air it looks good but you can tell its that syrup looking color. Details are good in some scenes and seem to be lacking in other scenes. In the scenes that were up close, details are well done. When there are scenes where the camera pans away details lack quite a bit which I felt like I was watching a upconverted DVD. There is some very light grain throughout the film which is never intrusive and fits with the look of the film very well. In no way will this transfer make your jaw drop to the floor. At this point I am happy to have been able to ditch my old DVD set in favor of having ‘Scream’ in full anamorphic widescreen. Granted this film does need a full restoration and you can tell with this release, despite the flaws it is worth replacing that old DVD with this Blu-ray considering how cheap it is too.
Print Quality: 8/10

The audio is presented in a DTS-HD MA lossless 5.1 mix. While this is not a demo worthy audio experience, I found the audio quality to trump the DVD release and one of the best parts of this disc. This is more of a front heavy experience with the occasional use of the surrounds to provide that a decent immersion. Bass was punchy as it shows with the train running at high speeds. Dialogue is also well placed in the center channel sounding crisp and clear. The best part of this is also the soundtrack bringing back memories of the 90’s. I was very happy with the audio on this release and ‘Scream’ has never sounded so good.
Print Quality: 9/10

“Scream” reinvented the horror genre upon its release in 1996. Scary films went to the wayside at the boxoffice by the late 1980’s after films like “Halloween” and “Nightmare on Elm Street” made too many sequels that were badly written and poorly acted, and ultimately the audience didn’t buy in to them.
Overall Rating: 8/10