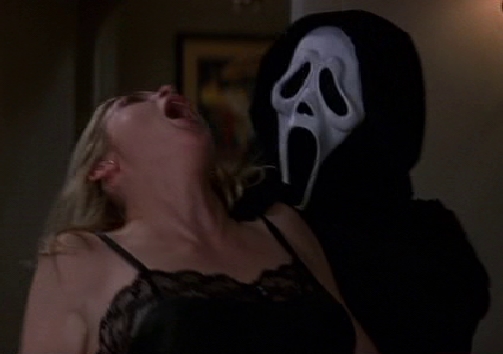 When Randy the video geek rattles off the rules of surviving a horror movie in Wes Craven’s Scream, he speaks for a generation of filmgoers who are all too aware of slasher movie clichés. Playfully scripted by Kevin Williamson with a self-aware wink and more than a few nods to its grandfathers (from Psycho to Halloween to the Friday the 13th dynasty), Scream skewers teen horror conventions with loving reverence while re-creating them in a modern, movie-savvy context. And so goes the series, which continues the satirical spoofing by tackling (what else?) sequels while sustaining its own self-contained mythology. Catty reporter Gale Weathers (Courteney Cox) turns grisly murders into lurid bestsellers, a cult of killer wannabes continues to hunt spunky psycho-survivor Sydney Prescott (Neve Campbell) for their 15 minutes of fame, and a cheesy movie series (Stab) develops within the movie series. Scream remains the high point of the series–a fresh take on a genre long since collapsed into routine, but Scream 2 spoofs itself with witty humor (“Why would anyone want to do that? Sequels suck!” opines college film student Randy), and delights with more elaborate set pieces and all-new rules for surviving a horror movie sequel. The endangered veterans of the original film reunite one last time for Scream 3, which plays out on the movie set of Stab 3. (It’s a trilogy within a trilogy!) With Williamson gone, replacement screenwriter Ehran Kruger tries to mine the formula one more time. It’s a little tired by now, and pale imitations (Urban Legend, I Know What You Did Last Summer) have further drained the zeitgeist, but the film bubbles with bright humor, and director Craven is stylistically at the top of his game. As a trilogy, it remains both the most consistently entertaining and self-aware horror series ever made. 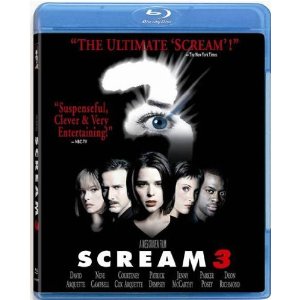 With the success of “Scream”, and the even bigger success of “Scream 2”, it really comes as no surprise that director Wes Craven would return one more time to the surviving characters from Woodsboro, and finish his trilogy of terror with the release of the final chapter, “Scream 3”. But without writer Kevin Williamson by his side, can Wes Craven’s “Scream 3” really live up to its predecessors?

After the terrible events that occurred around Sidney Prescott (Neve Campbell) in Woodsboro in “Scream”, and the mayhem that followed Sidney to her college campus in “Scream 2”, now to protect herself and the ones she loves, Sidney has gone into hiding via self-imposed exile. However, on the Hollywood set of `Stab 3′, the movie series based on the events that occurred on those tragic days in Woodsboro, the cast members begin dropping like flies in the same order as their characters are written to die in the film. With these recent murders and suspicions rising, Sidney comes out of hiding to help her fellow Woodsboro survivors, deputy Dewey (David Arquette), who is now a bodyguard for one of the actresses on the film `Stab 3′, and his former lover/news reporter Gail Weathers (Courtney Cox-Arquette). Just when they thought they knew the rules of the game, this new killer has come along and broken those rules. And this time no one is going to be safe.

“Scream 3” rejoins the three main characters from the previous two films for one final time, along with director Wes Craven, sadly writer Kevin Williamson opted out of this final chapter. The acting was about equal to the caliber of “Scream 2”, which means that the acting continued to be fairly solid all around. The gore, just as it was in the second film, was not as over-the-top as “Scream”, but did seem to be a little more evident than it did in “Scream 2”. The story was still full of twists and turns, with plenty of thrills to go around, plus plenty of comedy to break up the dark proceedings. Sadly, the humor sometimes takes front-and-center, leaving the drama in the background. This problem, in my opinion, is based on the fact that Kevin Williamson chose not to return, though he had his share of problems finding a decent blend of humor and drama in “Scream”, he skillfully mixed the two in his second outing with “Scream 2”. Some other aspects of “Scream 3” that were a little weak, most notably the clues being left at the scene of every murder were a little too convenient, and the actors playing parts in `Stab 3′ were a little too unrealistically stupid, which made for plenty of humor but added to the dumbing down of this franchise.

Overall, not as strong as the second installment, yet still above the first film in terms of storytelling and execution (no pun intended). “Scream 3” is a successful and enjoyable conclusion to Wes Craven’s trilogy of terror, but I would have preferred that writer Kevin Williamson would have stuck around for this final act.

The print is presented in 1080p/AVC MPEG-4 with a 2:35:1 aspect ratio. With each ‘Scream’ release on Blu-ray the quality has improved over the previous release. There is a slight issue with ‘Scream’ 3 where the image quality improves upon the previous releases, yet manages in some ways to fall behind. Considering that ‘Scream 3’ released in 2000, this print should have been much more consistent.  Color management is accurate with colors being strong and having a pretty good pop. Black levels are strong, except with some of the darker scenes. Clarity here reigns supreme when compared to the first two releases on Blu-ray which provides for a better looking presentation. Grain is on the heavier side in many of the darker scenes which is very noticeable and may aggravate the grain haters quite a bit.
Print Quality: 8.5/10

The audio is presented in a DTS-HD MA lossless 5.1 mix. ‘Scream 3’ offers the most aggressive mix of all three films on Blu-ray. This becomes prevalent in the first few minutes in the opening scene with Cotton racing to save his woman from a Ghostface attack. As he is racing down the highway and the streets to save her, it fills the soundfield adding quite the sound in the field. Bass also offers a nice punch. I did feel very immersed into the audio mix the entire film when compared to the first two films. Dialogue is also well placed in the center channel sounding crisp and clear.
Print Quality: 9/10

The plot does desperately attempt to fill in missing pieces of the previous screams, however, showing some signs of contrived foreshadowing. Each scene moves the story forward, though, replenishing the plot with freshness and ability around every abrupt corner. “Scream 3” is a close call, and is given somewhat of a mixed review, but I still am giving the movie a marginal recommendation. It contains more startles, more surprises, and more effective scary material than most slasher movies.
Overall Rating: 8/10