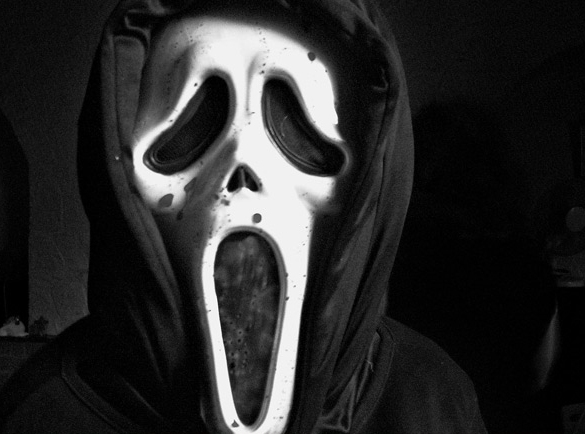 Away at college, Sidney Prescott (Campbell) thought she’d finally put the shocking murders that shattered her life behind her… until a copycat killer begins acting out a real-life sequel. Now as history repeats itself, ambitious reporter Gale Weathers (Cox), deputy Dewey (Arquette) and other Scream survivors find themselves trapped in a terrifyingly clever plotline where no one is safe – or beyond suspicion – in this “delicious, diabolical and fun” (Rolling Stone) sequel.

After becoming a phenomenal hit with young, and even some older, movie audiences with “Scream”, Wes Craven was beginning to come under immense pressure to top himself with a much anticipated sequel. Dimension films being smart enough to know that this is one horror franchise that if handled correctly could prove to be very profitable and entertaining, lobbied hard to get both director Wes Craven and writer Kevin Williamson back for the sequel. Upon accomplishing this task, and also the task of bringing back the acting talents for the surviving characters from the first film, the production crews for “Scream 2” were up and running at full speed.

“Scream 2” finds young Sidney Prescott (Neve Campbell) going to college, and trying to put her horrific past behind her. Try as she may, with the release of a movie based on the events that engulfed Sidney’s life in Woodsboro, Sidney once again is forced to face her tragic life. Just when the movie madness is dying down, murders begin to occur on Sidney’s college campus, and it appears that someone is setting out to make a real-life sequel to the events in Woodsboro. With history repeating itself, news reporter Gail Weathers (Courney Cox), Woodsboro’s own deputy Dewey (David Arquette), and a couple of other survivors from the original film, are back to try to save themselves and prove their innocence.

Any complaints or worries anyone had about a sequel to “Scream” have but to watch “Scream 2” and realize that they had nothing to worry about. Everything that was great about the original movie has been maintained and improved upon for the sequel. Director Wes Craven and writer Kevin Williamson have once again crafted a very clever web of suspicion and murder, that will entangle you and never let go until the credits roll. All of the complaints I had about the first film being to gory and a little too immature in places have been corrected. The gore factor appears to be lowered, as Wes Craven seems to be restraining himself to some extent with the murder sequences, and all of the dialogue is handled with maturity and care. All of the actors are terrific, the plot twists are once again very unique, and will catch you completely off guard. The characters are all thoroughly engaging, but sadly not all of your favorite characters will survive to the end.

The print is presented in 1080p/AVC MPEG-4 with a 2:35:1 aspect ratio. ‘Scream 2’ is a tad bit better than the original ‘Scream’ on Blu-ray. Some might take it as being a very bad thing as the ‘Scream’ trilogy seems to be released in time for ‘Scream 4’ to the theaters. Color management is much better with ‘Scream 2’ as colors are not anywhere being dull like the first film’s release on Blu-ray. While colors do not pop, they manage to stay consistent throughout. Clarity and details are pretty good this time around being very consistent except for a few scenes where I was judging what happened to the details. Grain is very minimal with ‘Scream 2’  which never is much less noticeable than the original. I am not one to complain about film grain, especially when its the director’s intent.
Print Quality: 8.5/10

The audio is presented in a DTS-HD MA lossless 5.1 mix. In ‘Scream 2’ we take a slight step backwards with the sound quality as opposed to the first film. Again this is more of a front heavy experience with the occasional use of the surrounds. Since the second entry has some more action heavy scenes, I expected more from the surrounds. Dialogue is also well placed in the center channel sounding crisp and clear.
Print Quality: 8.5/10

‘Scream 2’ is a good horror/slasher film and is the Sequel to the box office hit Scream. It offers even more character development then the original and in my opinion is a great film. However I still believe its a step down from the original Scream. The movie is just not as fresh as the original yet still is one of the best sequels in the horror genre which is rather rare. This is a highly recommended movie and upgrading from the DVD to Blu-ray is a good choice.
Overall Rating: 8/10