Scooby Doo: Season One, Vol. 2 – Bump in the Night

Posted in DVD Reviews by George Theofanopoulos on 15 May 2009 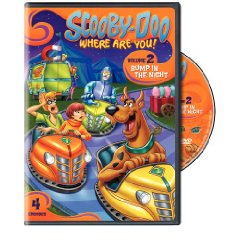 Scooby-Doo Where Are You! remains one of the most classic cartoons of television history. Hanna Barbera has since tried to recreate the Scooby-doo formula they achieved here but to no avail. Scrappy-Doo? I think the world has acknowledged him as a glaring failure on all counts. If for a moment you doubt that Hanna Barbera still desperately flails about looking for a new and successful way to reinvigorate the Scooby-Do franchise, the extra feature on the disc settles the matter. Corny, choppily animated and never complex, the original Scooby-Doo has many failings but it was also the first cartoon of memory that actually challenged kids to solve mysteries.

This collection includes episodes five through eight of the inaugural season of the original Scooby-Doo series.

Shaggy (Casey Kasem), Velma (Nicole Jaffe), Fred (Frank Welker), Daphne (Stephanianna Christopherson) and Scooby-Doo (Don Messick) always get tangled up in strange local mysteries. Scooby-Doo Where Are You!: Volume 2: Bump in the Night offers up episodes 5-8 of the original series for a little bit of classic fun. In these episodes, the gang encounters apes, ghosts, voodoo shamans and carnival robots in mysteries so classic they appear in the credits. These really are the episodes that established the show as a children’s television staple. What’s especially worth noting of each and every one of these episodes is that unlike some of the later episodes of the season or of following seasons, all of the villains in question here follow the really basic “villain covers his own butt with a fake supernatural ploy.” The later episodes get a little trickier, but as is, this volume’s selection won’t be too challenging for even the youngest of tikes.
Overall Rating: 9/10