Posted in DVD Reviews by George Theofanopoulos on 03 October 2011

Hop in the van for Mystery Inc.’s new, cool series of spooky capers. Like, it’s an all-new Scooby-Doo TV series for families who want their mysteries like Scooby-Doo and Shaggy want their pizza … spicy with extra sauce! Join the gang in Crystal Cove–the most haunted place on Earth–to solve creepy cases packed with fearsome spooks and frights, exciting chases, terrifying surprises and of course, Freddy’s ingenious traps. But the gang doesn’t fall for that ghost stuff anymore. They know there’s always a bad guy behind the monster suit, until they receive a cryptic clue from the mysterious Mr. E, who challenges them with their greatest mystery yet–to uncover the secret behind the curse of Crystal Cove! Get trapped with Scooby-Doo, Shaggy, Freddy, Daphne and Velma in four action-packed adventures from the cool, new show that’s a lot of doggone fun! 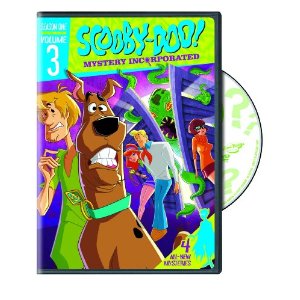 Audio: Dolby Digital 2.0 mix
Aspect Ratio: 1.78:1
Disc Spec: 1 DVD
Region: A
One of the most interesting new aspects of Scooby-Doo Mystery Inc. is the underlying mystery which provides greater depth to the show as each show helps builds upon the next one with small parts of the larger mystery slowly being revealed. In previous versions of Scooby-Doo it was rare for the other mysteries to be mentioned and very little looking back, which worked well for the original Scooby-Doo but also made going back and re-watching previous shows something to do just to re-watch, not to watch again for subtle plot points which might have been missed in the first viewing leading to better understanding of the characters and the larger mystery.

Battle of the Humungonauts
When two giant monsters start to attack Crystal Cove, Mayor Jones asks Fred and the gang to help him and the sheriff capture them. Meanwhile, Shaggy has to choose between his relationship with Velma and his friendship with Scooby.

The Secret Serum
There’s a vampire loose in Crystal Cove, terrorizing the residents and stealing an odd assortment of loot. When the gang does some sniffing around, they discover an unlikely suspect… Daphne’s MOTHER. Things are already strained within Mystery Inc., and with this latest blow, the gang is truly torn in half. Girls on one side, boys on the other.

The Shrieking Madness
With Mystery Inc. broken up, the gang decides to check out life after high school and spend a weekend at DARROW COLLEGE. But things don’t go as planned when a creature called CHAR GAR GOTHAKON begins terrorizing the campus.

A decent enough four episodes, this series tries to bring back the dark tone and creepiness of the original series, so despite its arguable flaws I enjoy it.

It tries to do some new things while still being strongly tied and close in roots to the original series. Give it a try if you haven’t seen it or had been turned off by other recent Scooby ventures.
Overall Rating: 7/10