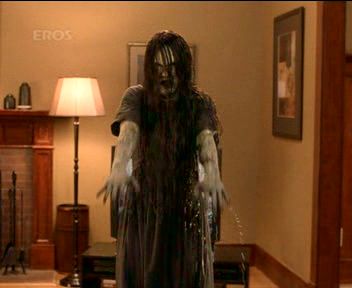 This freewheeling parody tosses horror movies, Eminem, The Matrix, and much more into a cinematic blender. Scary Movie 3 centers around Cindy (Anna Faris, Lost in Translation), a bubble-headed young newscaster who believes that a deadly videotape has some mysterious connection to the aliens who’ve been making crop circles in the cornfield of a local farmer (Charlie Sheen, Young Guns), whose brother (Simon Rex) hopes to win a local rap contest. Along for the ride are Queen Latifah, George Carlin, Anthony Anderson, Pamela Anderson, Jenny McCarthy, Jeremy Piven, Camryn Manheim, Ja Rule, dozens of rap stars, and Leslie Nielsen as the President of the U.S. No need to have seen the first two Scary Movie flicks–though a few of the characters recur, the movie leapfrogs from gag to goofy gag, plundering The Ring, Signs, and The Others as needed. Silly and slapdash, but with a decent dose of laughs. 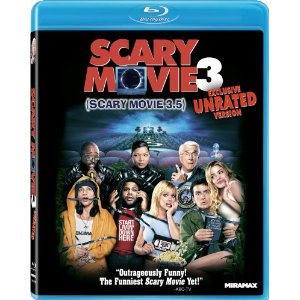 Studio: Lionsgate Films/Miramax Year: 2003 Release Date: August 2, 2011 Run time: 84 minutes Rating: PG Audio: DTS HD MA lossless 5.1 mix Aspect Ratio: 1.78:1 Disc Spec: 1 BD Region: A For those who aren’t acquainted with the ‘Scary Movie’ series, make a point of looking up the first two and watching them before seeing this one. It won’t make this one clearer but you will get an idea of what to expect. Begun by the Wayans brothers, the series of films spoofs the resent upsurge of horror films filling your local multiplex. This time around the Wayans have moved on. But in their place is one of the creators of this subgenre of film, David Zucker. Along with his brother and Jim Abrahams, they took the spoof format a whole new direction wherein every statement uttered by a character could and would be taken the wrong way. Beginning with ‘Kentucky Fried Movie’ and then moving on to ‘Airplane’ and the ‘Naked Gun’ series of films, they have made some of the funniest films around. And this one falls in line with the rest. So okay, what do you need to know before seeing this one? Make sure that you watch ‘The Ring’, ‘Signs’, ‘Matrix Reloaded’, and ‘The Others’ before seeing this film. If you don’t you’ll miss many of the jokes going on here. Along with many other sight gags, these are the main films focused on for attack. And if you haven’t seen those films, stop here until you do because while talking about this one you’ll find spoilers for those. The film revolves around Cindy Campbell (Anna Faris), two characters to carry on through all three films. Now working as a television news reporter, she investigates a strange crop circle that has appeared in a local field. Through this investigation she meets George (Simon Rex), the brother of the farm owner Tom (Charlie Sheen) and a love interest is sparked. This is a definite popcorn flick, one that requires the viewer to not become so involved that he has to study each frame of film. It’s one that is meant for the viewer to sit back and guffaw at from the first segment (involving stereotypical blonde bimbos Pamela Anderson Lee and Jenny McCarthy spoofing not only ‘The Ring’ but themselves as well) to the last. Movie Quality:6/10

The print is presented in 1080p/AVC MPEG-4 with a 1:78:1 aspect ratio. ‘Scary Movie 3’ is the best looking of the original trilogy on Blu-ray providing some very strong colors. These excellent colors help in providing superb details. The previous film had an issue with a lack in details. Black levels are strong. I was surprised at how good the image quality was when compared to the second film which just released 2 years earlier. Print Quality: 9/10 The audio is presented in a DTS-HD MA l0ssless 5.1 mix. The audio is on par with the video presentation in this third film taking advantage of the lossless audio. There are effects that fill the soundfield throughout the film. Surround use is well done as there are various dynamics panning from speaker to speaker. Dialogue is well placed in the center channel and is mixed very well with the various audio elements in the field. Print Quality:8.5/10

It could be said this movie is somewhat disappointing. It had its funny moments but it is nowhere near as hilarious as Scary Movie 2. Anna Faris and Regina Hall are as hilarous as ever but the biggest disappointment was the absence of the Wayans brothers. If you are a fan of the ‘Scary Movie 3’ I highly recommend purchasing this on Blu-ray and upgrading the DVD. Overall Rating: 7/10