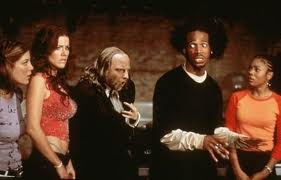 The Wayans Brothers return with another horror-flick parody, this one taking shots at The Exorcist, Hannibal, and House on Haunted Hill, along with non-horror fare like Charlie’s Angels. In addition to gags (and I do mean gag) about innumerable bodily functions, there are slyer jabs at Thomas Jefferson and Raging Bull. As in Scary Movie, the strongest humor comes from making fun of the inane behavior of characters in horror movies. Assisting Shawn and Marlon Wayans are Anna Faris, Kathleen Robertson (in the Carmen Electra role, providing the T&A), and David Cross, as well as Tori Spelling, Chris Elliott, James Woods (as an exorcist with bowel trouble), Andy Richter, and poor Tim Curry, who probably never thought his career would come to this. 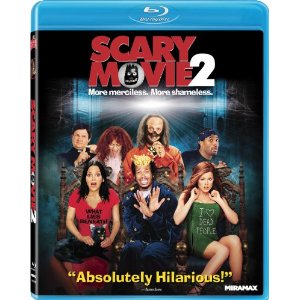 With the success of Scary Movie, it should have been no surprise there would be a Scary Movie 2. Forget the movie poster said “no sequel”, that picking fun at the fact, when a movie does so well, the movie studios usually scream “Let’s make a sequel!!!” This movie was pretty funny, but I thought it was somewhat tamer than the first movie. The more I watch it, the more I like it. Initially, I did not like it as much as I did the first one. Shawn and Marlon Wayans return, along with Anna Farris, and Regina Hall. James Woods, Tori Spelling, Tim Curry, Kathleen Robertson, Richard Moll as the Ghost, and Chris Elliot are newcomers in this installment. Keenan Ivory Wayans returns as the Director of the second installment. Like Scary Movie, Scary Movie 2 spoofs some horror flicks and even includes a play on the Nike Commercial. Scary Movie 2 spoofs, The Exorcist, House on Haunted Hill, and Charlie’s Angels.

The beginning of the movie is funny with the girl urinating endlessly on the carpet, and the mother hitting her in the head with a rolled up newspaper. James Woods is hilarious as the priest that’s trying to exorcise the demon out of the little girl. The puking scene is gross, but so funny, you can’t help but laugh. When Cindy sees Ray and asks him “What are you doing here?, I’m back for the sequel.” is Ray’s response. Chris Elliot stole the movie with his little hands and his strange behavior. I could not stop laughing during the dinner scene, when he kept putting his hand in the food, and the guest did not want to eat. When he was trying to rub his hand on someone’s face, and she was repulsed it. The other scene that I enjoy watching is Tori Spelling being seduced by the spirit and how she ended up on the wall, then the ceiling, and when he first saw her toe nails he said “What the?” I still chuckle when I think about that scene. It’s that funny. Well it is too me. When she starts planning their future together while smoking a cigarette and he leaves her that is hilarious!!!! When Hansen cuts open Shorty’s brain (spoofing a scene from Hannibal), and this really funny looking guy appears, I’m still end up wiping my face thinking about that scene.
Movie Quality: 7/10

The print is presented in 1080p/AVC MPEG-4 with a 1:78:1 aspect ratio. ‘Scary Movie 2’ is a subpar presentation on Blu-ray which is a shame that one of the better horror spoof films gets this treatment. The print does have some damage throughout with specs of all kinds and dirt. It considerably hampers the image that it can take away from your enjoyment of the film. The colors are great with this print, but have a problem with murkiness of the image that throws off the image. Details are excellent bringing out the fine details. Black levels are great. This is a print that is good at times and other times just doesn’t look to have received the proper care.
Print Quality: 6/10

The audio is presented in a DTS-HD MA l0ssless 5.1 mix. ‘Scary Movie 2’ offers a very atmospheric and immersive sounding experience. I found the sound design to be much better with the sequel over the original film. The rears provide quite a few times where sound effects panned across the speakers. There are many scenes that are outside which also take advantage of the soundfield providing some dynamic sound. This is a mix that Dialogue is very clear with no apparent issues.
Print Quality: 9.5/10

While Scary Movie 2 has a few ‘lame’ shots, it actually delivers a whallop right off bat and has a good running before losing it’s footing for a bit. On Blu-ray the film has subpar video quality and decent audio which should make fans of the film semi-satisfied and a upgrade from DVD if your looking to upgrade your DVD.
Overall Rating: 6/10