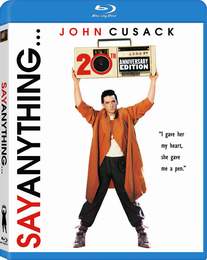 Seven years after he earned his first screen credit as the writer of Fast Times at Ridgemont High, former Rolling Stone writer Cameron Crowe made his directorial debut with this acclaimed romantic comedy starring John Cusack and Ione Skye as unlikely lovers on the cusp of adulthood. The casting is perfect, and Crowe’s rookie direction is appropriately unobtrusive, no doubt influenced by his actor-loving, Oscar®-winning mentor, James L. Brooks. But the real strength of Crowe’s work is his exceptional writing, his timely grasp of contemporary rhythms and language (he’s frequently called “the voice of a generation”), and the rich humor and depth of his fully developed characters. In Say Anything… Cusack and Skye play recent high school graduates enjoying one final summer before leaping into a lifetime of adult responsibilities. Lloyd (Cusack) is an aspiring kickboxer with no definite plans; Diane (Skye) is a valedictorian with intentions to further her education in Europe. Together they find unlikely bliss, but there’s also turbulence when Diane’s father (John Mahoney)–who only wants what’s best for his daughter–is charged with fraud and tax evasion. Favoring strong performances over obtrusive visual style, Crowe focuses on his unique characters and the ambitions and fears that define them; the movie’s a treasure trove of quiet, often humorous revelations of personality. Lili Taylor and Eric Stoltz score high marks for memorable supporting roles, and Cusack’s own sister Joan is perfect in scenes with her onscreen and offscreen brother. A rare romantic comedy that’s as funny as it is dramatically honest, Say Anything… marked the arrival of a gifted writer-director who followed up with the underrated Singles before scoring his first box-office smash with Jerry Maguire.

Cameron Crowe’s debut film as a director is a joy to see. Mr. Crowe has done exactly the same thing here, in 1989’s “Say Anything…”, as he did eleven years later, in his (IMO) masterpiece “Almost Famous”. And that is: to create a batch of realistic and, most importantly, likeable characters within the framework of his movie. It’s nearly impossible, from this writer’s point-of-view, to NOT like each and every one of the characters Cameron has crafted. These characters ring “true”, and seem like people everyone would want to have as friends.

“Say Anything” is a pretty simple “boy chasing girl” story. But what makes it special are the characterizations of the boy and the girl….plus the girl’s proud-as-a-peacock father, played perfectly by John Mahoney, in what must certainly be one of the biggest (and best) roles of the actor’s film career. This entire cast is first-rate, right down to the quirky. The standout even among this band of standouts is Ione Skye, who portrays Diane Court, the object of John Cusack’s desire throughout the film.
Movie Quality: 9.5/10

The print is presented in 1080p/AVC MPEG-4 with a 1.85:1 aspect ratio. I am rather impressed for a film that is 20 years old and actually looks very good in high definition. Colors are vibrant and stand out very well. Black levels are strong. I did find a few instances where the image was rather soft, but does not detract from the film. Details have been improved a lot from the previous DVD release.
Video Quality: 8.5/10

The audio is presented in DTS-HD MA lossless 5.1 mix. Just as I was surprised by the video presentation, I felt the same with the audio mix. This is a romantic comedy, so dialogue is the key piece to the mix. Dialogue was clean and crisp through the center channel. I found the audio to fill the soundfield very nicely based off of the soundtrack. The soundfield does feel dynamic at all times which is a great thing considering the films age.
Audio Quality: 9/10

‘Say Anything’ is one of the best romantic comedies to come out of the 80’s. Looking at the films that John Cusak releases now when compared to his films in the 80’s, he has come a very long way. The film looks and sounds great on Blu-ray considering that this is a 20 year old film. I would suggest purchasing this film as it is one of the best romantic comedies of the 80’s.
Overall Rating: 9/10