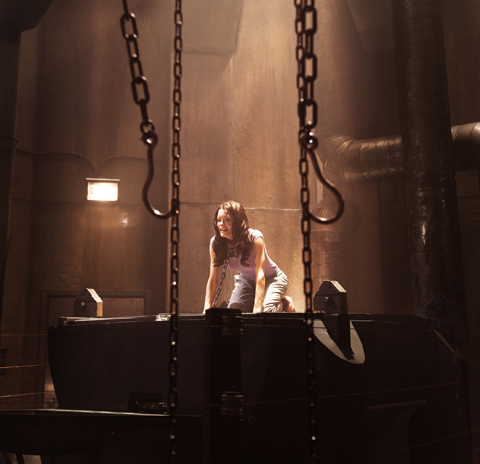 All gross things must come to an end–even the Saw franchise, which reaches its terminal point with this seventh feature (its first released in 3D in theaters). “Franchise” actually isn’t the proper term for the grisly series; each new film might be best described as the latest model, like a car or a DVD player, since the mechanics of the infernal machines created and unleashed by the morally driven Jigsaw and his henchman, Matt Hoffman (Costas Mandylor), are the real selling points, not the plot or acting or direction. Suffice it to say that the story here is somewhat novel–B-movie vet Sean Patrick Flanery is a self-help guru whose fame has hinged on the notion that he survived Jigsaw’s deadly traps. The claim is a lie, of course, and Flanery soon finds himself in Hoffman’s clutches, attempting to rescue his wife (Gina Holden) while all manner of accomplices die in hideous ways. As the Saw universe goes, Saw 3D is still relentlessly ghoulish and Sadean to a fault, but since the characters still refuse to operate like real human beings, it’s difficult to feel anything about their gruesome passing. What the film does have going for it is a cameo from Cary Elwes’s Dr. Gordon, who famously survived the first film, as well as the de rigueur flashback with Tobin Bell as Jigsaw, who brings malevolent energy that the rest of the film sorely lacks. As for the traps, their fans will be undoubtedly pleased by the latest array, of which there are 11, the most ever featured in one Saw film, and in particular by the opening worktable contraption, and by a device involving several cars, levers, and some very sticky glue. 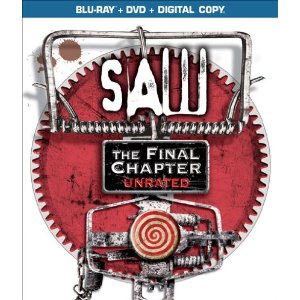 None of the Saw films have been able to capture the same atmosphere or effectiveness of the original film. The sequels weren’t able to screw with your head or have a twist that was quite as big as the one in the 2004 film. Most of the sequels had a budget of around $10 million, but went on to gross over $50 million at the box office. It’s no wonder that Jigsaw is the new face of horror and the Saw films are being called the modern version of Friday the 13th since the sequels hit every year around Halloween like clockwork. So now, here we are, the “final” installment in the franchise and it’s being presented in 3-D. Unfortunately, Saw 3D leaves a lot to be desired.

The film honestly felt like it was just trap after trap after trap until we reached the finale. The traps were bigger and sure, they looked pretty great in 3-D, but they were happening to new characters; characters we didn’t know or care about. It seemed like they tried to cram as many traps they could into an hour and a half to capitalize on the 3-D trend. On one hand, that isn’t all bad. If you’re a fan of the series, you’ll probably still enjoy the countless amount of traps (seriously, you won’t be able to remember all of them after it ends). If the film was just another Saw sequel, these bigger traps and new characters would be fine. But this is labeled as the last film of the franchise and other than what’s revealed in the final minutes of the film, nothing is answered or unanswered that wasn’t revealed in Saw VI.

The biggest issue of the whole film is the lack of John Kramer. He literally has like two flashback scenes and an intro video. That’s it. Sure, the man died four films ago and he’s been surviving on flashbacks and memories ever since, but Tobin Bell doesn’t deserve top billing if he’s only in the film for five minutes.

The ending itself actually made it feel like Saw 3D was a return to form or at least an attempt to get back to its roots, which sounds pretty good on paper but isn’t once you see it on-screen. Unless Saw 8 actually winds up happening and continues on with mostly new characters, then the whole thing feels like nothing more than a huge tease.

Saw 3D is not a satisfying conclusion to a horror franchise that has run the past seven years as it leaves too many unanswered questions to gratify hardcore fans, but is still fairly entertaining thanks to its endless amount of traps and return of a major character. The film does seem to wrap up everything for the John Kramer character, but makes you wonder if the series is really done or if it was left open ended on purpose in case it does well at the box office for the seventh year in a row. At the end of the day, Saw 3D may be considered a pointless sequel that will either leave fans wanting a more definitive conclusion or wishing it never happened.
Movie Content: 8/10

The print is presented in 1080p/AVC MPEG-4 with a 2.35:1 aspect ratio. “SAW VII” out of all the films in the series has to be the most crisp looking film in the entire series of films on Blu-ray. ‘SAW VII’ does retains the grit from the earlier ‘SAW’ films with some excellent details throughout. Colors are strong with no soft points. The film retains that industrial look from the past films with browns, reds, and yellows being the strongest colors in the mix. This time around a bluish tint also takes center stage throughout many scenes in the film. Black levels are deep and inky providing some excellent details in dark scenes. Flesh tones are natural. This print offers some great details throughout the entire film. I did not really notice any grain this time around which is a staple of the series.
Video Quality: 9.5/10

The audio is presented in DTS-HD MA lossless 7.1 mix. This DTS mix is aggressive throughout the film taking advantage of the soundfield. ‘SAW VII’ continues the aggressive/bombastic mix as we found with the last few “SAW” films. This mix offers some very nice dynamics with each sound. You feel immersed at all times as this film is very atmospheric from listening to the traps as they are in operation, to the screams from their victims, gunshots, and many effects. The panning of effects is also well done as you can hear the chains of one of the traps pan across the rears. Bass is deep offering a rather thunderous rumble during the intense scenes. This franchise is a mix of sound effects and dialogue using its soundfield to its fullest. Dialogue is clear and crisp through the center channel with no issues. The mix is well balanced offering a consistent level during the intense scenes and the subtle moments when there is dialogue.
Audio Quality: 9.5/5

‘SAW VII’ to a degree left me disappointed as a longtime fan of the franchise. I felt like some questions were answered, while others were left open for almost another chapter. I am glad that the “SAW” franchise has finally come to an end. Fans of the franchise and of this film will want to pick up the Blu-ray which has a chock full of special features to go with excellent video and audio.
Overall Rating: 7/10