The Saw series gains a commendable hint of social conscience with this sixth entry in the gleefully gruesome franchise. That’s not to say that the creators have abandoned the films’ main focus–dealing out hideous punishments for wrongdoers, courtesy its antihero, John Kramer/Jigsaw (Tobin Bell), who remains very dead as of this film–but screenwriters Marcus Dunston and Patrick Melton (who have penned every Saw pic since IV) deserve a note of recognition for pointing Jigsaw’s moral fury at the insurance industry, which is personified by key victim Peter Outerbridge’s oily exec. His decision to deny Kramer an experimental cancer treatment (all told in flashback) lands him and a handful of additional lost souls (all connected, of course) in yet another Rube Goldbergian chamber of horrors overseen by Jigsaw’s acolyte, Detective Hoffman (Costas Mandylor). The improbability of the infernal machines continues to reach hysterical levels here, though the payoffs remain exceptionally gross, especially in the opener, which plays on the Shakespearean “pound of flesh” riff with spectacularly nauseating results. Aside from the insurance angle, there’s little to differentiate Saw VI from its predecessors, and precious less to convince the nonfaithful that the series isn’t spinning its wheels by this point–and based on the film’s tepid opening-weekend box office, audiences may agree–but for Saw die-hards, there’s much bloody business on hand here, and best of all, the promise of another sequel.

With each passing year we have a new ‘SAW’ film to grace theaters and 2009 was no different when ‘SAW VI’ released before Halloween in October. As everyone knows, I am a huge fan of the ‘SAW’ franchise, but I do feel like this franchise is running out of gas. The sixth installment was excellent helping tie up many loose ends with Jigsaw’s past, yet it opened up new questions for the proposed seventh and eighth films in the series. Fans of the previous installments should give ‘SAW VI’ a chance if they have not yet, a lot is revealed in what was to be the final installment of the series. ‘SAW VI’ did bring in $34 million dollars worldwide which is the lowest for the franchise, yet still successful when considering the film was only made on a budget of $11 million dollars.

The central conflict involves William Easton (Peter Outerbridge), the sleazy executive of a health insurance company who grants or denies coverage based on the probability of a person’s illness. In essence, he chooses who lives and who dies. Unfortunately, it’s for this very reason that he ended up on Kramer’s short list of people to be “rehabilitated,” and he soon finds himself trapped in yet another series of elaborate and painful traps, each more implausible than the last. In one, six of his junior co-workers find themselves chained to a rotating carousel, which periodically stops in front of a loaded shotgun; Easton has the power to prevent only two of them from getting blasted, so it becomes a matter of choosing who will live and who will die.

Also trapped in Jigsaw’s lair is Pamela Jenkins (Samantha Lemole), a shady reporter, and a mother and son (Shauna MacDonald and Devon Bostick) who, for reasons I won’t reveal, share a connection with Easton. They wake up in a room rigged with a tank of hydrofluoric acid and a switchbox with the words “live” and “die” written on it.

Another subplot, this one involving Kramer’s widow, Jill Tuck (Betsey Russell), sheds some light on who she is and just how much she knew about her husband’s extracurricular activities. I can’t say I was completely satisfied with what was revealed, but hey, at least I got to see the contents of the box she was given in the last movie. We also learn a bit more about Kramer’s oldest apprentice, Amanda Young (Shawnee Smith), and her strained affiliation with Hoffman.

The ending kind of caught me off guard because things move so fast, I was wondering why they chose to go with this editing style. In essence it does confuse the viewer a bit upon initial viewing.
Movie Content: 9/10 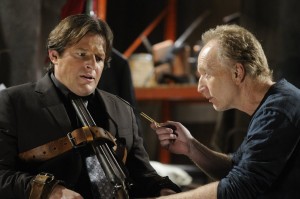 The print is presented in 1080p/AVC MPEG-4 with a 2.35:1 aspect ratio. It seems with each passing ‘SAW’ film that the grittiness has been toned down a bit. ‘SAW VI’ retains some of the grit from the earlier ‘SAW’ films with some excellent details throughout. Colors are strong with no soft points. The film retains that industrial look from the past films with browns, reds, and yellows being the strongest colors in the mix. Black levels are deep and inky providing some excellent details in dark scenes. Flesh tones are natural. This print offers some great details with shots that are up close, but there were a few instances with the camera panning away as details were lost with characters in the background. There is some grain throughout, but not as apparent as the past films.
Video Quality: 9.5/10

The audio is presented in DTS-HD MA lossless 7.1 mix. This DTS mix is aggressive throughout the film taking advantage of the soundfield. ‘SAW VI’ continues the aggressive/bombastic mix as we found with ‘SAW V’. This mix offers some very nice dynamics with each sound. You feel immersed at all times as this film is very atmospheric from listening to the traps as they are in operation, to the screams from their victims, gunshots, and many effects. The panning of effects is also well done as you can hear the chains of one of the traps pan across the rears. Bass is deep offering a rather thunderous rumble during the intense scenes. This franchise is a mix of sound effects and dialogue using its soundfield to its fullest. Dialogue is clear and crisp through the center channel with no issues. The mix is well balanced offering a consistent level during the intense scenes and the subtle moments when there is dialogue.
Audio Quality: 9.5/5

‘SAW VI’ does an excellent job in wrapping up many loose ends that were created in the previous ‘SAW’ films, yet it opens up many new questions. It will be interesting to see how this franchise fairs next year when it makes its entry in 3D to theaters. There is a nice amount of extras with this package and also included is a Blu-ray version of the first ‘SAW’ which was not remastered in anyway and is still the original Blu-ray release. If you are a fan of this series, you owe it to yourself to pick this film up as it answers many questions you had from the previous films.
Overall Rating: 8.5/10