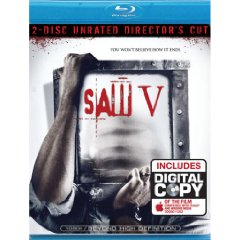 I am a huge fan of the ‘SAW’ franchise and look forward to each installment like my kids do for Christmas morning. At first it was about the inventive traps that sucked me into the films, but with each film the story was becoming more and more prominent. These story elements slightly started to unfold with ‘SAW III’, and then the story started taking center stage with ‘SAW IV’ over the traps which at one time were the focal point. While ‘SAW IV’ was a disappointment to some fans, I really enjoyed the new direction of the franchise. ‘SAW V’ continued where ‘SAW IV’ left off with, but offering an even more interesting part of the story arc. ‘SAW V’ was a huge success at the theaters with a total worldwide gross of $103 million dollars with only a $10 million dollar budget.

It will all come down with how the final chapter, ‘SAW VI’ ends that it will make or break this franchise. It will be detrimental that ‘SAW VI’ caps off a story arc that has spanned six films keeping us at the edge of our seats from the beginning. I have always looked at each film as a piece or chapter to an overall story. The story of ‘SAW V’ revolves around a cat and mouse game between Agent Peter Strahm (Scott Patterson) and Lieutenant Mark Hoffman (Costas Mandylor). While Hoffman is playing a new game with a set of 5 strangers that have more in common with each other than they realize at first, Strahm is hot on his trail. This leads to Strahm getting kicked off of the case and told to go home. Strahm doesn’t listen as he begins to continue the investigation on his own.

Instead of the 5 strangers working with each other to get through the traps, Ashley (Laura Gordon), Charles (Carlo Rota), Brit (Julie Benz), Mallick (Greg Bryk), and Luba (Meagan Good) can’t trust each other to work through the traps. By the final trap, the remaining survivors realize that they made a mistake with how the game was played. Instead of being selfish and thinking of others, they would have not of gone through so much agony.

While the cat and mouse game is occurring between Strahm and Hoffman, Hoffman is trying to clear up any evidence that ties him to Jigsaw. Hoffman points this mess on Strahm as the police department begins to get suspicious of him. Hoffman goes so far as to having Strahm’s boss, Dan Erickson (Mark Rolston) into believing that he is working with Jigsaw after some planted evidence.

There are also flashbacks of Jigsaw (Tobin Bell) showing how he and Detective Hoffman became aligned. Some of the flashbacks show us how the two worked together to capture Paul Stallberg (Mike Butters) for the razor wire trap in ‘SAW’. Then how they set up the nerve gas house in ‘SAW II’, and discussed plans before Amanda Young (Shawnee Smith) brought Lynn Denlon (Bahar Soomekh) to Jigsaw in ‘SAW III’. We learn the circumstances as to why Hoffman is helping Jigsaw during the flashbacks.

In probably one of the most important elements of ‘SAW V’, we briefly see Jill Tuck (Betsy Russell) who is John Kramer’s ex-wife. Jill receives a videotape and a box from a lawyer as they are sitting at a table discussing what John has left behind for her. Jill opens up the box, takes a peak inside and freaks out a bit as she runs out of the room with the box in tow.

As much as I enjoyed ‘SAW IV’, ‘SAW V’ does benefit from a few important issues that many fans were upset about with where Darren Lynn Bousman was taking the series. This direction had to do a lot with the use of a shaky-cam and jump cuts which are rather similar to the ‘Bourne’ trilogy. Another problem was the script in the last ‘SAW’ film, this really upset many fans. There appeared to be a bit too much going on that made the story convoluted to some. Then add the issue with the way the film was directed, and for some it was a mess. I enjoyed ‘SAW IV’ and had an even better time with ‘SAW V’.
Movie Content: 4.5/5 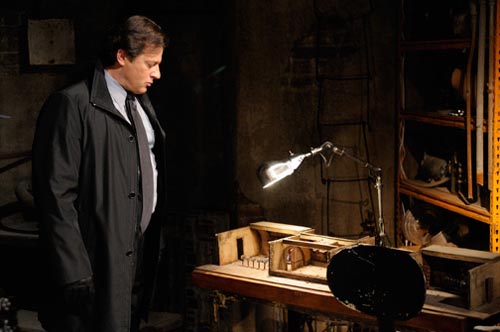 The print is presented in 1080p/AVC MPEG-4 with a 1.78:1 aspect ratio. The ‘SAW’ films have always been gritty, and ‘SAW V’ is no different yet the image quality is taken up a notch. Colors this time are a bit richer losing some of the softness from the earlier films. Black levels are deep and inky providing some excellent details in dark scenes. Flesh tones are natural. The grain returns throughout the entire print, but this time it is much more subtle than ever before. It never gets distracting, but it helps add a gritty feel to the film with the various uses of yellow and blue tints in various scenes. This print offers some great details with shots that are up close, but there were a few instances with the camera panning away as details were lost with characters in the background. The Blu-ray does an excellent job representing the film as it was originally intended.
Video Quality: 4.5/5

The audio is presented in DTS-HD MA lossless 7.1 mix. This DTS mix is aggressive throughout the film taking advantage of the soundfield. If you thought that ‘SAW IV’ sounded fantastic, ‘SAW V’ takes the crown for excellent audio for the series. This mix offers some very nice dynamics with each sound. You feel immersed at all times as this film is very atmospheric from listening to the traps as they are in operation, to the screams from their victims, gunshots, and many effects. The panning of effects is also well done as you can hear the chains of one of the traps pan across the rears. Bass is deep offering a rather thunderous rumble during the intense scenes. This franchise is a mix of sound effects and dialogue using its soundfield to its fullest. Dialogue is clear and crisp through the center channel with no issues. The mix is well balanced offering a consistent level during the intense scenes and the subtle moments when there is dialogue.
Audio Quality: 4.5/5 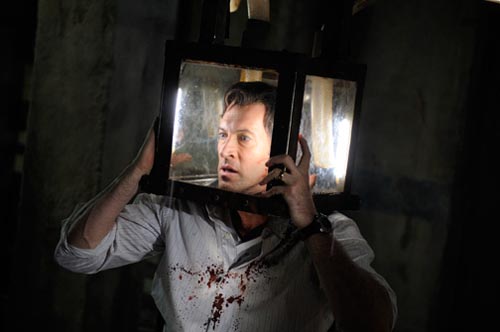 All the special features are offered in standard definition and Dolby Digital 2.0, except for the ‘Theatrical Trailer’ and the ‘Also From Lionsgate’ trailers which are in high definition. Lionsgate offers up a plethora of special features with ‘SAW V’ on Blu-ray, except we are missing a mere 14 minutes worth of deleted scenes that were promised by Director David Hackl in many interviews after the film’s theatrical review. Hopefully those deleted scenes and multiple alternate endings due see the day of light in the future. Lionsgate also offers a Digital Copy of the film on a second disc for those that enjoy portable versions of their films.
Special Features: 4/5

‘SAW V’ is an excellent entry in the ‘SAW’ franchise and helps push the intrigue of the story of Jigsaw into its final chapter which will release Halloween 2009. Fans that did not enjoy ‘SAW IV’, ‘SAW V’ bounces back providing a more cohesive storyline and Director David Hackl injects new life into the film. The Blu-ray version of the film provides excellent video and audio to go along with a plethora of extras that should keep fans of the series occupied for a few hours. I highly recommend ‘SAW V’ as a purchase especially if you are a fan.
Overall Rating: 4.5/5 (Purchase)