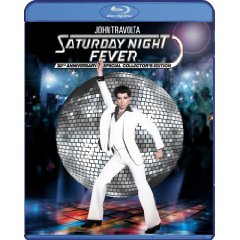 Saturday Night Fever is one of those movies that comes along and seems to change the cultural temperature in a flash. After the movie’s release in 1977, disco ruled the dance floors, and a blow-dried member of a TV-sitcom ensemble became the hottest star in the U.S. For all that, the story is conventional: a 19-year-old Italian American from Brooklyn, Tony Manero (John Travolta), works in a humble paint store and lives with his family. After dark, he becomes the polyester-clad stallion of the local nightclub; Tony’s brother, a priest, observes that when Tony hits the dance floor, the crowd parts like the Red Sea before Moses. Director John Badham captures the electric connection between music and dance, and also the desperation that lies beneath Tony’s ambitions to break out of his limited world. The soundtrack, which spawned a massively successful album, is dominated by the disco classics of the Bee Gees, including “Staying Alive” (Travolta’s theme during the strutting opening) and “Night Fever.” The Oscar®-nominated Travolta, plucked from the cast of Welcome Back, Kotter, for his first starring role, is incandescent and unbelievably confident, and his dancing is terrific. Oh, and the white suit rules.

Travolta is in his prime spotlight as a Brooklyn kid aiming to make it big on the dance floor. There isn’t much to the movie other than the need for fame–as brief as it may be–and the most obvious theme of the film, which is learning to treat women as something more than just sex objects. Tony and his pals all join together at 2001 Odyssey, a crummy disco club with dizzying strobe lights and a constantly-waxed dance floor where Tony is often encouraged to let loose and show everyone his moves. When he’s not doing that, he’s sitting at the bar watching a topless stripper do her thing. And he’s only 19.

Part of this movie is learning to grow up, and treat women as something more than Tony is used to treating them. But that’s one of two primary plots–the other is, of course, trying to break away from a boring life. Tony comes from an Italian background, and he lives in a bad area of town. His mother is proud of her eldest son, who became a priest, and she’s discouraged by the fact that her other son doesn’t seem to care about making anything out of his life. We get the feeling that Tony’s parents once had the same outlook as their son, and fear he may be going down their own path. After Tony gets a raise from $3 to $4, his father tells him that $4 can’t even buy $3. His son swears at him and storms away.

In an era of test groups, sequels, remakes galore, and competing entertaining alternatives you are not likely to see a movie as entertaining and thoughtful as ‘Saturday Night Fever’. This is one of my all-time favorite films that I have enjoyed even more with each viewing over the years.
Movie Content: 9.5/10

The print is presented in 1080p/AVC MPEG-4 with a 1.85:1 aspect ratio. The film is 31 years old this year. I have seen the film on broadcast television and the two DVD releases over the years, the film has never looked so good. The print has been cleaned up rather well for the Blu-ray release when compared to the DVD. While things aren’t perfect, there is grain still on the print, but nowhere near what was found on the DVD. I found the colors to be rather soft. Black levels are strong.
Print Quality: 8.5/10

The audio is presented in Dolby TrueHD 5.1 mix. This is an excellent mix that could easily sell those on the fence about the format for a catalog title of this age. The soundfield is immersive at all times no matter if it is the soundtrack or dialogue. I was surprised with the 70’s disco music sounding so good. Dialogue is also well placed in the center channel sounding crisp and clear.
Audio Quality: 9/10

‘Saturday Night Fever’ still holds up rather well here in 2009 and there has no’t been another film like it. This film is in my top list for films of all-time. On Blu-ray, the film excels with great video and audio for a catalog title at the age of 31 year old print. If you are a fan of the film, I highly recommend this as a purchase.
Overall Rating: 9/10