Posted in DVD Reviews by George Theofanopoulos on 10 November 2008 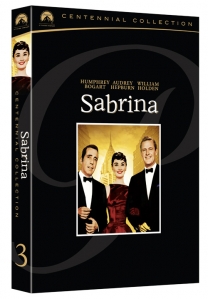 There are many films over the years that are coined as a classic. One of those classics is the wonderful ‘Sabrina’ which has aged like a fine wine. Romantic comedies tend to follow the same formula over and over again, yet in 1954 ‘Sabrina’ came along and sparked some kind of magic over the genre.

‘Sabrina’ is based off of the Broadway play ‘Sabrina Fair’, but there were many things that were changed for the screen adaptation. In 1995 the film would be remade with Harrison Ford, Julia Ormond, and Greg Kinear. While the film wasn’t anywhere near the original, it was well put together.

Sabrina Fairchild (Audrey Hepburn) is the daughter of the Larrabee family chauffeur (John Williams). Sabrina has been around the Larrabee family for years and she really loves their son David Larrabee (William Holden). David never gives Sabrina the time of day as he looks at her as not being up to his standards. A lot of that has to do that her father is their chauffeur, meaning he is not of rich blood like his family. Sabrina goes away to Paris for her studies in culinary arts. While in Paris, Sabrina matures into a beautiful woman that would turn heads upon her return.

During Sabrina’s absence, there is a huge corporate deal going on between both Larrabee and Tyson families. While there is a lot of money on the line, there is also David Larrabee and Elizabeth Tyson’s (Marth Hyer) relationship that hinges on this deal. They are engaged to be married, but the business deal between the families is lingering over their head. Linus (Humphrey Bogart) whom is David’s brother also has vested interest in this relationship as he is a business man. David sees Sabrina and he starts to fall in love with her. Then there is another problem when Linus also has his eye on Sabrina.

This film is just excellent and a rare breed. The comedic moments come in spades and are well balanced with the story. Wilder does an excellent job keeping us glued to the screen waiting to see what will happen next. This is one of those films that still holds up very well 54 years later. The acting is also some of the best of the era with Hepburn, Holden, and Bogart at their best. Hepburn steals the show with her charm and elegance.

Print/Audio Quality
The print is presented in 1.75:1 full frame aspect ratio. I still wonder why this film hasn’t been released in anamorphic widescreen since the original intent of the film was always to be in widescreen. The print looks fantastic without any visual blemishes. Details are much better this time around as compared to the 2001 release. Contrast has more definition making this one beautiful looking black and white film. The audio is presented in Dolby Digital 2.0 with all the dialogue coming through being very clear through the center channel.

‘Sabrina’ is a rather enjoyable romantic comedy that still holds its weight 54 years later. The new image transfer makes this film even more beautiful than it has ever been. Hepburn, Bogart, and Holden have some of the best performances of their careers. It is Audrey Hepburn that steals the show with her role.