The plotline may sound familiar: Two mismatched cops are assigned as reluctant partners to solve a crime. Culturally they are complete opposites, and they quickly realize they can’t stand each other. One (Jackie Chan) believes in doing things by the book. He is a man with integrity and nerves of steel. The other (Chris Tucker) is an amiable rebel who can’t stand authority figures. He’s a man who has to do everything on his own, much to the displeasure of his superior officer, who in turn thinks this cop is a loose cannon but tolerates him because he gets the job done. Directed by Brett Ratner, Rush Hour doesn’t break any new ground in terms of story, stunts, or direction. It rehashes just about every “buddy” movie ever made–in fact, it makes films such as Tango and Cash seem utterly original and clever by comparison. So, why did this uninspired movie make over $120 million at the box office? Was the whole world suffering from temporary insanity? Hardly. The explanation for the success of Rush Hour is quite simple: chemistry. The casting of veteran action maestro Jackie Chan with the charming and often hilarious Chris Tucker was a serendipitous stroke of genius. Fans of Jackie Chan may be slightly disappointed by the lack of action set pieces that emphasize his kung-fu craft. On the other hand, those who know the history of this seasoned Hong Kong actor will be able to appreciate that Rush Hour was the mainstream breakthrough that Chan had deserved for years. Coupled with the charismatic scene-stealer Tucker, Chan gets to flex his comic muscles to great effect. From their first scenes together to the trademark Chan outtakes during the end credits, their ability to play off of one another is a joy to behold, and this mischievous interaction is what saves the film from slipping into the depths of pitiful mediocrity. 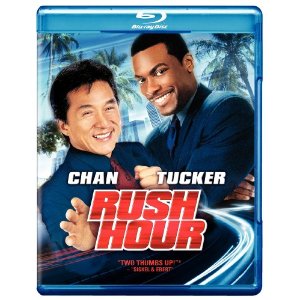 One of the funniest things in cinema and some of the most enjoyable comic moments in the past few years have come from watching Tucker’s performances. You can almost see his mind working in overtime trying to think up what to say next; and you never know what he’ll say next. He takes the best of what Eddie Murphy used to be and just speeds it up a few hundred….thousand notches. It’s just his looks of mock anger that always make me laugh. Never has anger been so funny.

He’s joined by action star Jackie Chan in this film, which, although it’s very funny at times, never really moves above the level of average, forgetable entertainment. Chan has done better “stunt-orientated” films like “Supercop” and “Rumble In The Bronx”. In those films, he really shined with his mix of good humor and quick action. Here he’s made to be more in the shape of the plot’s need for humor and dialogue over stunts…not to say that there aren’t any stunts; there are. It’s just that they are a little few and far between.

The story revolves around a Chinese Console member who’s daughter is kidnapped. Chan is brought in by the console member. The only problem is that the FBI wants to solve this case itself, and Chan’s detective is not welcome. Some of the funniest scenes in the movie are watching Tucker’s detective come to the realization that all he’s called on to do is babysit Chan’s detective. So, we start into the age old buddy cop flick.

Thankfully, this one isn’t too bad. A nice script, some very good moments also from Chris Tucker when he’s allowed to just improv his performance. Thank god Tucker and Chan liven up the proceedings; Chan has his usual array of incredible stunts, running up and down the sides of everything, kicking, doing it all; Tucker’s mouth and Chan’s quick feet make a nice balance of opposites. It’s unfortunate that the direction is average, the plot is something you’ve seen all before, but it’s through the performances of Tucker and Chan who make “Rush Hour” worth watching. It’s nothing new, but when it works, “Rush Hour” is a whole lot of fun.
Movie Content: 9.5/10

The print is presented in 1080p/VC-1 with a 2.35:1 aspect ratio. New Line has done a phenomenal job with the transfer of “Rush Hour”. The colors of Los Angeles are incredibly vivid and just pop on this disc. Look at the reds in the Chinatown scenes or the colors of the neon at night. The color saturation is wonderful and there is no bleeding in the colors; the light from a neon sign looks perfectly sharp and clear. Speaking of sharpness, the images themselves are perfectly clear and sharp throughout the disc. There are a few instances where there is a small shimmering problem, but compared to a lot of the other discs I’ve seen lately, the shimmering in this disc isn’t worth mentioning. Again, images are razor sharp throughout, there aren’t any other problems at all with this disc. There are a lot more pros to talk about, though. Skin tones are 100% perfect. There is definitely no pixelization in the disc whatsoever, even in the low-light scenes or in the backgrounds. Black level in the picture is fantastic and contrast is wonderful. Shadow level is excellent and overall, this is a nice continuation of the New Line tradition of replicating the theatrical experience at home.
Video Quality: 9.5/10

The audio mix is presented in DTS HD 7.1 Master Audio lossless track. mpressive sound quality on this disc, emphasizing the sounds that added to the tone of fun on this disc and that’s Lalo Schifrin’s fun, urban and light score melding old R&B hits and current rap along with other wonderful bits and pieces of fun music to make an enjoyable score. The score fills the room and sounds full and clear. Dialogue also has that “same room” impression, recorded with clarity. There’s a lot of impressive sound on this disc like the gunfire(director Ratner talks on the commentary about how he wanted to make the gunfire loud and emphasize it to make it “exciting”), which sounds great. The explosions also fill the room with great impact and force.
Audio Quality: 9.5/10

Rush Hour is one of those movies I could watch over and over again and enjoy it each and every single time. The chemistry between Chan and Tucker is superb (Lethal Weapon-quality) and even though the plot is a bit trite, the overall movement and fun of the film keeps it going.
Overall Rating: 8/10