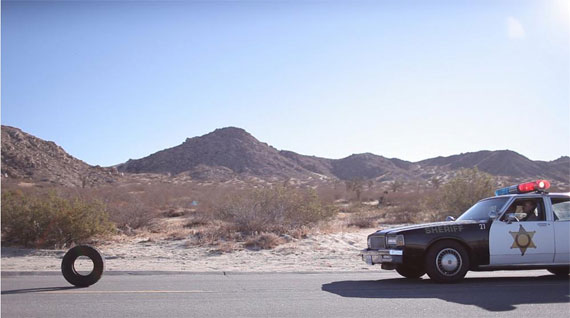 Rubber is the story of Robert, an inanimate tire that has been abandoned in the desert and then suddenly and inexplicably comes to life. As Robert roams the bleak landscape, he discovers that he possesses terrifying telepathic powers that give him the ability to destroy anything he wishes. At first content to prey on discarded objects and small desert creatures, his attention soon turns to humans, especially a beautiful and mysterious woman who crosses his path. Leaving a swath of destruction behind, Robert becomes a chaotic force and truly a movie villain for the ages. 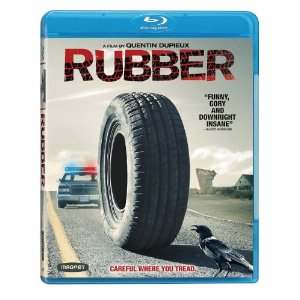 Rubber tries so hard to be something different that it really boils itself down to poor story telling. You have a story with one really interesting idea that wasn’t successfully beefed up to fill out a whole movie. Which isn’t to say there is nothing redeeming here, there are several scenes that have well written dialogue and performances but at 80 min long the “no reason” shtick simply doesn’t keep us entertained. The idea of breaking the “fourth wall” with spectators becoming part of the story comes off as less entertaining and more “what else do we do to be cutting edge and inflate this puppy up to 90 min?”

So throughout the whole movie we keep getting pulled out of the story for a quick laugh, only it stopped being funny the first time it was done. Where Rubber excels is the small scenes that don’t have directorial exclamations around them (‘hey, see what we did here, he is talking to YOU the viewer!’ or ‘see, he thinks it’s a fake movie made for “real spectators” but it’s “real” because you the viewer are watching it!’) like the tire being accidentally thwarted by a swimming pool and then being released by the only character that knows it’s actually dangerous.
Movie Quality: 6/10

The print is presented in 1080p/AVC MPEG-4 with a 1:78:1 aspect ratio. ‘Rubber’ albeit being a very different film sports an excellent transfer for having a lower budget. This transfer is very sharp and crisp looking. Blacks are strong and deep looking very inky. Colors are vivid looking with a colorful presentation. There is some slight banding, but nothing that is obtrusive. Considering that this is a digital transfer, very slight grain that isn’t even noticeable.
Print Quality: 9.5/10

The audio is presented in a DTS-HD MA l0ssless 5.1 mix. If there is one redeeming element for this disc, it has to do with the audio presentation. From the dialogue pieces and the effects in the soundfield, the audio is top notch. Dialogue was clean and clear through the center channel. I found this mix to be well balanced with no point during the film did I have to use my remote to adjust the volume.
Print Quality: 9/10

Dupieux obviously wants to have it both ways; in “Rubber” he tries to create both a cult horror-comedy and a serious commentary on popular cinema. He doesn’t succeed, but he does manage to make a movie that, once seen, will never be forgotten. Why should you see this movie? No reason. But if you’re not looking for a reason, it may amuse you.
Overall Rating: 6/10