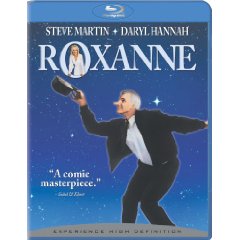 In 1987, almost a hundred years after its first production, the romantic story of Cyrano de Bergerac found new life in a winsome film written by Steve Martin. Roxanne updates the tale with a smart ’80s spin, yet writer-star Martin stays close to the old-fashioned heart of the matter. He plays a small-town firefighter named C.D. Bales, whose otherwise unremarkable existence is crowned by an amazingly long nose. He falls for the world’s most beautiful astronomer (Daryl Hannah), but he is embarrassed by the size of his proboscis and prefers to stay on the sidelines. Like Cyrano, the shy C.D. instead helps a handsome friend (Rick Rossovich) woo the fair lady by providing flowery sentiments and soulful poetry. Not only does the story still work, but Australian director Fred Schepisi captures a dreamy grace in his visual design for the film (some of which will be lost without the widescreen format). Set in Washington State, but filmed in the hilly ski resort of Nelson, British Columbia, the location seems like a fairy-tale town, nearly as unreal as Steve Martin’s nose.

‘Roxanne’ elevates itself above routine fare with an excellent supporting cast, including Shelly Duvall in the odd role of C.D.’s best friend (according to the film, their characters aren’t related, so have they dated in the past?), Michael J. Pollard as the nerdy, but very funny fireman Andy, who should never be challenged in a boxing match. And most especially Fred Willard as the over-the-top mayor.

This is my favorite Steve Martin film of all time. It’s romantic, thoughtful, clever and hilarious, with probably one of the better portrayals of unrequited love I’ve seen in pictures. Roxanne is a sweet little movie, replete with exquisite physical comedy and heady wit, with a great cast of supporting characters (Shelley Duvall, John Kapelos, Michael J. Pollard, etc). Part of the movie’s charm is the way it mines the hapless volunteer firefighters’ ineptness for goodnatured, slapstick humor. Roxanne incorporates its storyline seamlessly into the charming small town backdrop, lending a quaint, more intimate feel to the picture. If you haven’t seen this one yet, do yourself a favor, and I promise: your heart will ache and maybe even break, but in a good way.
Movie Content: 9/10

The print is presented in 1080p/AVC MPEG-4 with a 2.40:1 aspect ratio. The print is one of the better ones that I have seen for an older film. Colors are vivid and bright providing a nicely saturated presentation. Blacks are solid throughout the print. Flesh tones are natural looking with no enhancement. Details look very good in this film. Fans of the film will not be upset and more than satisfied with this release.
Print Quality: 9/10

The audio is presented in Dolby TrueHD 5.1 mix. ‘Roxanne’ is a more dialogue driven film with excellent audio for the premise of the film. With this being a romantic comedy, there are no action sequences, so don’t come in expecting a bombastic mix. Dialogue is very clean and crisp through the center channel. We have more of a front heavy experience with the mix as dialogue also tends to pan between the front speakers. When the rears get are in use, you hear a few sound effects and the score.
Audio Quality: 8.5/10

This is very disappointing that there are no special features available for this release.

‘Roxanne’ is an excellent film from 20+ years ago that I have enjoyed with every single viewing. The image is superb as Sony engineers have done another great job with an older catalog title. The only disappointing aspect is that there are no special features related to the film.
Overall Rating: 8.5/10