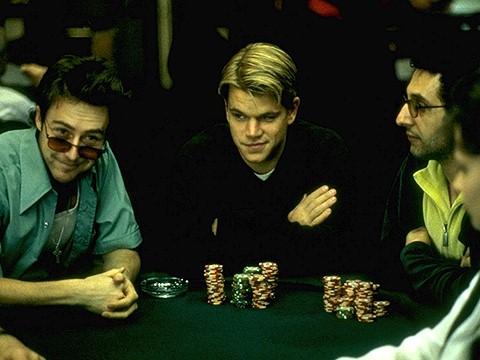 Academy Award® winner Matt Damon (True Grit, The Bourne Supremacy) and Edward Norton (Fight Club, The Italian Job) star in this story of passion, risk and the extreme price of friendship! After losing a high-stakes card game, Mike (Damon) gives up gambling for law school and a fresh start with his girlfriend (Gretchen Mol – Cradle Will Rock). But then his best buddy (Norton) gets out of prison and in over his head with a ruthless card shark (John Malkovich – Being John Malkovich). From there, Mike’s strong sense of loyalty – and the lure of the game – draws him back to the tables in a game he cannot afford to lose! Also starring John Turturro (O Brother, Where Art Thou?, Transformers) and Oscar® winner Martin Landau (Ed Wood) 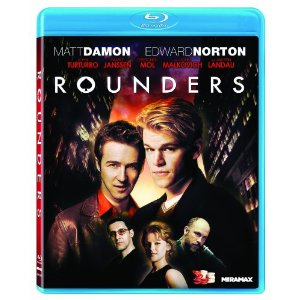 One of the biggest mistakes you can make when it comes to the movie “Rounders” is assume that if you have no interest in cards or poker, or don’t even know how to play the game that you’ll hate the movie or have no desire to want to see it. When I first saw it a few years back, the only card game I knew how to play was blackjack, and yet there was something that really drew me in. Something that clicked for me, and now it is one of my favorite movies. One of those rare movies I could literally leave on all day.

Mike makes a living and supports his tuition by grinding it out every night at the poker tables. The goal, he tells us, is to only win one big bet an hour. Still, the dream for him is to make it to the World Series of Poker and face off with the pros. That dream clouds his judgment when he faces off with a dangerous and no-nonsense taking Russian, Teddy KGB and leads him to lose every penny of his money. After that night, he swears off cards for good and promises his girlfriend that he’ll never play again.

Things get complicated when his buddy, Worm gets out of jail. Worm is a card player who refuses to play “straight up.” He’s what they call a “mechanic,” meaning he usually cheats when he plays. He’s got a serious debt to pay and feels the only way he can make the scratch is to play the game. Mike wants to help him out, but he’s made promises, but that slowly starts to deteriorate and he ends up being in the game again. While it could very well be a blessing in disguise that Worm has gotten him back into the world of poker, the stakes couldn’t be higher and he will end up putting the both of them into the worst kind of trouble.

What makes “Rounders” work are the characters and the actors. You’ll find a top-notch cast that includes Matt Damon, Edward Norton, John Turturro, John Malkovich and Martin Landau. All are amazing in their roles and really bring their characters to life on the screen. There will be times where you feel sorry for Norton’s character and other times where you feel nothing but complete disgust and shame. I think it’s one of his best performances, and “Mike” sums it up best when he says that “Worm” knows how to play the part of the loser, because he does it to absolute perfection in this film. The movie isn’t about plot, or at least not a complex ones. Sometimes, those are the kinds that work out the best so long as you have an all-star cast that can make it work. Smart writing also is a gigantic help, and I’m happy to say that can be found in here as well.
Movie Quality: 9.5/10

The print is presented in 1080p/AVC MPEG-4 with a 2:35:1 aspect ratio. Having seen ‘Rounders’ on DVD and broadcast television several times, this Blu-ray release helps usher some new life to the film. Colors are handled very well providing a strong presentation. From the colors to the details, your jaw will drop if you look for some of the superb details. Colors are vibrant providing an excellent looking picture. Flesh tones are natural and accurate looking. Blacks look inky. There is a small hint of film grain which is retained from the original release.
Print Quality: 9.5/10

Great action sequences and the Poker games are very entertaining. John Malkovich plays a very weird Russian mafia guy named Teddy KGB who is menacing and ultimately taken down by Damon at head to head Texas Hold Em. ‘Rounders’ looks really good on Blu-ray and fans of the film will not be disappointed.
Overall Rating: 8/10