Posted in DVD Reviews by George Theofanopoulos on 20 March 2020
“Warner Bros. Home Entertainment provided me with a free copy of the DVD I reviewed in this Blog Post. The opinions I share are my own.”

After a decade away from home, Liz Ortecho (Jeanine Mason) returns to her native Roswell to care for her ailing father. When she arrives, she reconnects with her high school crush Max Evans (Nathan Parsons) who is now a police officer. Their chemistry is electric, but Liz soon learns something shocking: Max and his sister, Isobel (Lily Cowles), and friend Michael (Michael Vlamis) are aliens who have kept their abilities secret their entire lives. As she and Max grow closer, Liz struggles to keep the truth from her best friend, Maria (Heather Hemmens), and her high school ex, Dr. Kyle Valenti (Michael Trevino). But concealing the visitors’ true identities is more important than ever, as a long-standing government conspiracy and the politics of fear and hatred threaten their lives. Based on the Roswell High book series, Roswell, New Mexico is a love story, a relationship drama and the story of a small town…that happens to have aliens. 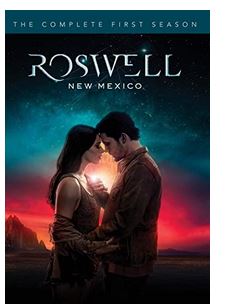 Let me start off by saying that I absolutely loved the original Roswell series. I remember watching it every week and then bought all three seasons of it on DVD. When I saw they were remaking it, I was very hesitant to watch it because I didn’t think they could do it justice but in the end, decided to give it a chance. I like that some of the elements are the same but I love that the new series has more to it. It’s not just about the aliens or Max and Liz, it has more meat to the story. I love that Liz is a strong female character, she’s intelligent and she stands up for herself. I also love that Max isn’t inherently good. You see sides of him that make him kind of scary but not in a creepy way. It lends another dimension to the whole alien storyline that was missing from the original. I also really like what they did with the Michael character. I’m sure a lot of people were not happy to see the direction they took him in but I honestly think it fits well. So far I’m not very impressed with the Isobel character and what they did with her. Honestly, at this point, she could be taken out of the series completely and it wouldn’t really make much of a difference.

I’m fascinated by the change in Michael’s character. I remember when Michael and Maria was everyone’s favorite couple. I’m interested to see what changes it will have on Maria’s story. Can’t wait for more.
Overall Rating: 9/10