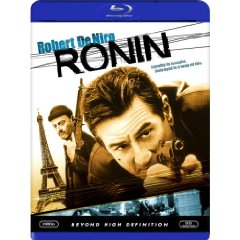 ‘Ronin’ is quite an interesting movie. It has a stellar cast including Jean Reno, Robert De Niro, Stellan Skarsgard, Natasha McElhorne, and Sean Bean. They are all professionals and when there are car chases and gun fights then you can imagine what kind of profession they are in. Yes they are sort of bad guys, yet they are clever and cunning and each one has a specialty that the others lack.

Vincent (Jean Reno) is a French coordinator, Gregor (Stellan Skarsgard) a German electronics expert, Larry (Skipp Sudduth) is the driver, Spence (Sean Bean) a veteran from United Kingdom and Sam (Robert De Niro), is a strategist. They find themselves in a room together after being hired by the long haired Natasha McElhorne who doesn’t want to reveal what is in the silver cases they need to steal and more importantly who her boss is.

This movie struck me as if it ran on the principals of prison movies. The code of honor in prisoners; trust and honor between thieves and criminals who form loyalties even though they are not supposed to trust anyone. In ‘Ronin’ the simple job of ambushing a three car caravan on a quiet road in cozy Niece, France turns out to be a tangled mess of suspense. The car chases were insane, performed through extremely intricate little European roads at top speed providing for long intense moments. There was even a chase in a tunnel with cars going in the wrong direction at full speed. This car chase has to be one of the Top 3 car chases I have ever seen in a film.

De Niro and Reno quickly end up trusting each other yet they are never sure of what the other person really does in their spare time as everything is top secret. The whole cast of characters was wonderful, fully of trickery and false personalities as the viewer got to travel through the route to ultimate truth and the result of the ambush.
Movie Content: 5/5 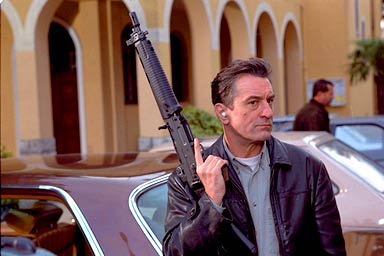 The print is presented in 1080p/MPEG-2 with a 2.35:1 aspect ratio. Now that ‘Ronin’ has finally been released after a 1.5 year delay, it finally makes its debut to Blu-ray. One of the problems is that the film is on a single-layer BD25 with a MPEG-2 codec which really makes this film look at times like an upconverted DVD. This hurts what could have been an incredible looking image for such a great and intense film. There are other times where up close scenes look very good when the camera is up close. Black colors are also very deep and ink-like. These are the few redeeming qualities about the print. I hope that MGM will revisit this film in the near future giving it the royal treatment.
Print Quality: 2/5

The audio is presented in DTS-HD MA lossless 5.1 mix. While the video isn’t something to brag about, the audio helps redeem this package. Audio in the soundfield is well channeled across the room. You hear all kinds of effects during the action scenes including gunshots, explosions, and vehicles with some excellent chase scenes. Dialogue is clean through the center channel without any issues. Now can someone please give me my good quality image transfer to match the top notch audio.
Audio Quality: 4/5 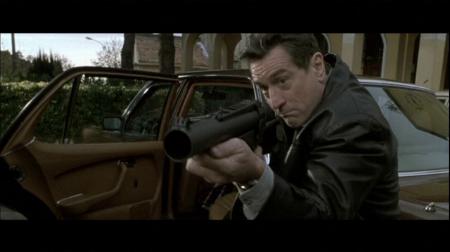 There are no special features available which is a shame considering that the 2-disc edition DVD had a plethora of extras. One of the reasons for this is that the film was pressed, completed, and packaged for a few years sitting in a warehouse waiting for the green light to be sold after numerous delays. Colors are muted throughout as it was the directors intention.
Special Features: 0/5

‘Ronin’ is excellent with a few flaws and one of my all-time favorite films that deserved much better treatment in terms of image quality and the lack of special features. Here is to hoping that one day soon MGM releases this film on Blu-ray with all the trimmings. For fans this is a toss up since the film does look at times like an upconverted DVD, but then other spots it looks like its in HD.
Overall Rating: 2.5/5