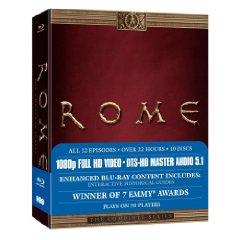 Four hundred years after the founding of the Republic, Rome is the wealthiest city in the world, a cosmopolitan metropolis of one million people, epicenter of a sprawling empire. But now, the city’s foundations are crumbling, eaten away by corruption and excess…And two soldiers unwittingly become entwined in historical events, their fates inexorably tied to the fate of Rome itself. The entire award-winning, critically-acclaimed series will be available as a Blu-ray gift set, just in time for the holiday season.

The story is told from the vantage point of two soldiers, one eventually rising through the ranks, the other only finding a settled existence towards the end. Both are, though in name only, based on historical characters. Gruff and dutiful Lucius Vorenus is haunted by personal tragedy. He struggles with his role as a father and his allegiance to a loosing party, that of Mark Antony; struggles that at one point will land him as the leader of a band of hired assassins. His unlikely friend Titus Pullo leads an aimless existence that never manages to be carefree and that only gains some focus whenever some fighting is to be done. The plot has been constructed around the far-out premise that the whole birth of the Roman Empire pivoted on the actions of these two men, rather than those of Julius Caesar and his ilk. The idea has been woven into the story so tightly and cleverly that it is surprisingly easy to suspend disbelief.

The first season is the more consistent and compelling of the two, dealing with the battle between Julius Caesar and Magnus Pompey. The strife between the families of Caesar and Brutus is exemplified by their two matrons Atia and Servilia, both in their way as vicious and devious a schemer as you’re ever likely to see. The development of the relationship between Vorenus and Niobe is believable and quite touching.

The second season then depicts the power struggle between Mark Antony and Gaius Octavian, and introduces the exotic element of Egypt, where Cleopatra’s court appears to be some kind of whorehouse and the Queen herself a scantily dressed upmarket prostitute. Halfway through this season the story start to get ragged, and some plotlines hang by a precariously thin thread (the way Vorenus discovers his daughter’s betrayal is like something out of an uninspired Miss Marple episode). A Jewish subplot is randomly tacked on and feels like a cumbersome invention to burden the story with irrelevant premonitions of Christ. Furthermore, it doesn’t help that a substantial number of the more interesting characters, notably Cicero, Servilia and Brutus, are killed off. The “Xena, Warrior Princess”- act of Gaia in the battle of the Collegia is probably the low point of the series. Fortunately, things are pulled together for the final episodes, where the story is satisfyingly wrapped up and the viewer is indeed left, in Octavian’s words, with the sense of having travelled a long road.

History buffs will find ample cause to be annoyed nonetheless. Many events are fabricated, characters are missing (where are Octavia’s husband Claudius Marcellus, Atia’s husband Lucius Phillippus and Marc Anthony’s wife Fulvia?), people weren’t really in the places where we see them at the moment we see them there (Caesar wasn’t killed in the Senate, Cicero wasn’t killed at home), and several details of costume and ritual are anachronistic or invented. Alexandria is shown as some rustic backwater rather than the dazzling metropolis it was.

Characters are sometimes almost insultingly distorted. Cicero wasn’t the abject hypocrite and coward he’s been made into by the makers of the series. He delivered the Philippics against Antony himself, and was a figure of great power and huge popularity. Atia gets even worse treatment: described by Tacitus as one of the most admired and devout matrons of Rome, who couldn’t bear crude language and was deeply serious, she is turned into a foul-mouthed, violent she-devil.
Movie Quality: 9/10

The print is presented in 1080p/VC-1 with a 1.85:1 aspect ratio. ‘Rome’ encompasses the gritty atmosphere in content as it does on print. This is one area that some might feel like they are snubbed by the print, which is an issue albeit both seasons being spread across 10 Blu-ray discs. The main issues that occur is some apparent artifacts and noise that gets out of hand at times. On the positive side, I found colors to be strong throughout the entire presentation. Blacks are deep. Fleshtones have a natural look and feel to them. Details are excellent, but there were scenes where a loss of details occurred. It is things like this that could turn off anyone looking for a pristine print. I think HBO would have been wise to spread both seasons across several more discs than just the 10 included here.
Video Quality: 8.5/10

The audio is presented in DTS-HD MA lossless 5.1 mix. This series has a nice mix between battle and dialogue driven scenes. This is not an overly aggressive sound mix as one would expect during the battle sequences. Dialogue is centered properly through the center channel providing a nice deep clarity. During dialogue driven films, this is very important on the depth as I have seen with a few DTS-HD mixes lacking dialogue depth. Dynamics during the battle sequences tend to falter as they are just on the lighter side. This does affect the use of sound effects in the soundfield which is a bit disappointing.
Audio Quality: 8.5/10

‘Rome’ is a very enjoyable series that should have been given more than just two season to build upon some of the excellent storylines. The writing team was rushed in season two to wrap many story arcs which affected this series. On Blu-ray there are a few inconsistencies with the video and audio could have been a bit more dynamic. If you are a fan of this series, then you owe it to yourself to purchase ‘Rome’ on Blu-ray in all its high def glory.
Overall Rating: 8.5/10