Posted in Blu-ray Reviews by George Theofanopoulos on 10 July 2011
They were created deep within the secret island laboratories of an unscrupulous biotech corporation and grown to horrific proportions…until they both escaped. Bullets won’t stop them. Explosives only make them meaner. And their ravenous reptile appetites for scientists, tourists, S.W.A.T. teams and swimsuit models have only just begun. Now an undercover investigator, a sexy Fish & Game officer, and a cold-blooded swamp hunter known only as ‘The Cajun’ are all in pursuit of the scaly beasts that can outrun SUVs, crush buses, and snack on sleazy producers in hot tubs. But when these monster lizards ultimately meet in battle, will mankind be the defeated species? David Carradine (Kill Bill, Death Race 2000) — in one of his final performances — stars in this epic Syfy smash about the bone-crunching, body-chomping, earth-trembling smackdown of Dinocroc vs. Supergator! 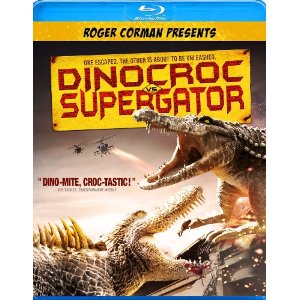 Who doesn’t love genetically engineered animal hybrids? I love them, clearly the SyFy network does, and Roger Corman as well. B-movie genius Corman does take a production credit on the epic SyFy presentation “Dinocroc vs Supergator” and even contributes an inspired audio commentary for the DVD and Blu-Ray release. Unless you lack creative reasoning, I probably don’t have to tell you what this movie is promoting. But the visual realization of these nightmarish entities is only a small selling point of this effective bit of bad movie mayhem. For my money, to make a classic bad movie legend–you need several important components: First, a wacky killing machine or two. Second, a maniacally deranged, but logically challenged, plot. And third, a cast giving you overwrought dialogue as if the fate of the world depended on it. Thus, using my completely arbitrary personal criteria, “Dinocroc vs Supergator” is a solid entry into the bad movie lexicon that misses being a highpoint in the genre.

Make no mistake, this is a horrendously bad movie–oh, but so delightfully awful. Strangely, while this ticks many of the boxes that would make it a ridiculous camp classic, the weakest element is the creatures and their less-than-epic showdown. My delight stems more from the human co-stars and the mind-boggling screenplay. Not just bad, epic bad.
Movie Quality: 4/10

The print is presented in 1080p/AVC MPEG-4 with a 1.78:1 aspect ratio. The print is rather inconsistent in certain areas. Colors are de-saturated throughout the entire presentation. The lighting was a bit too bright in many scenes which ended up making the image seem like there was a sun in the background. Black levels are deep and inky. Flesh tones weren’t accurate and looked a tad blah. Details aren’t the best that I have seen in a high definition presentation. There is grain and noise throughout the presentation of varying degrees. This tends to become distracting to the viewer.
Print Quality: 7/10

The audio is presented in a DTS-HD MA l0ssless 5.1 mix. If there is one redeeming element for this disc, it has to do with the audio presentation. From the dialogue pieces and the effects in the soundfield, the audio is top notch. This is one aggressive mix during the action sequences providing a nice dynamic range and excellent panning. The sound makes you feel as if you are a part of the action and sitting right in the thick of things. Dialogue was clean and clear through the center channel. I found this mix to be well balanced with no point during the film did I have to use my remote to adjust the volume.
Print Quality: 8/10

The original Dinocroc was much better and was somewhat creative. The idea for a low budget cheesey flick was a really good idea for just one movie, maybe a few. But making an endless amount of movies all sharing the same plot and storyling gets annoying after a while.
Overall Rating: 5/10