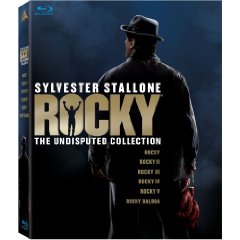 “Rocky” (1976) is the story of a club fighter who gets a chance to fight for the heavyweight championship. Sylvester Stallone became the third person ever to be nominated for writing and acting Academy Awards in the same year (Charlie Chaplin for “The Great Dictator” and Orson Welles for “Citizen Kane” were the first two; Welles also got a directing nod and the following year Woody Allen would do the trifecta for “Annie Hall”). Stallone lost to Paddy Chayefsky and Peter Finch, both of “Network,” but “Rocky” scored the big upset and took home the Best Picture Oscar. Why is this film the best? Let the man speak for himself: “Nobody’s ever gone the distance with Creed, and if I can go that distance, you see, and that bell rings and I’m still standin’, I’m gonna know for the first time in my life, see, that I weren’t just another bum from the neighborhood.” The supporting cast earned three Oscar nominations and getting Bill Conti to do the music was the final masterstroke. My only complaint with this movie is Apollo Creed is out on his feet before the bell rings and the ref should have called the fight. (10/10)

“Rocky II” (1979) proved there was going to be a rematch after all. I say this in the theater, first show on opening day, and we were all screaming during the fight at the end like we were in the arena. Stallone starts directing these movies at this point and while the patented “Rocky” formula is already becoming obvious, he does pay attention to the psychology of Rocky and Apollo that forces them back into the ring. Automatic deductions for all that damn slow motion during the fight, especially the final falls. (9/10)

“Rocky III” (1982) is the slickest of the bunch and the most entertaining film in the series. Yes, once again we have the end of the previous film at the start of the next one, but the montage contrasting the successful Rocky with the ascendant Clubber Lang, who is genuinely scary, is really nice. The scene with Hulk Hogan is a hoot and even though Stallone is going through the numbers again the fights are all short, sweet, and to the point. (8.5/10)

“Rocky IV” (1985) is a painfully obvious message film. James Brown feels good in this one, but he is out of the movie before it starts to come apart. My problem is not with the ideology of this film and Rocky’s plea for peace, but with the contrast between Drago’s steroid induced strength and Rocky’s run up the mountain training technique. A punch from Drago has an impact of almost a half-ton. I have no problem believing that the guy cannot take a bunch, but I cannot believe that Drago’s haymakers do not take off Rocky’s head, or at least tear his brain lose. (8/10)

“Rocky V” (1990) finally deals with the brain damage that Drago must have caused, and throws in Rocky losing his fortune. Both of these are very real concerns for former boxers. Rocky trains young Tommy Gunn, ignoring his own kid in the process, as a way of reliving his former glory. When the kid betrays him, the two end up brawling on the street. I can accept that Rocky knows how to be a street fighter, but I draw the line at being able to fight when you have a concussion. The humanity that drew us to the character in the original is gone, and not in a transcendent way. However, I will give Stallone that he certainly plays out the character’s flaws. (6.5/10)

“Rocky Balboa” (2006) is the final installment of the Rocky series, “Rocky Balboa”, has much of the flavor of the original Rocky (1976) release. The emphasis is not on the fight, rather, it is on the character of Rocky, and how he is struggling to maintain himself after the unexpected and premature death of his beloved Adrian. Adrian has died and Rocky’s life stopped when she died. He is stuck in the past, with no clear vision of his future without her at his side. Each morning, Rocky begins his day by sitting beside Adrian’s grave in a wooden chair he stores in the crook of a nearby tree. He brings her fresh flowers and contemplates their past love together. He has a restaurant, called “Adrian’s”, where Rocky entertains his guests with stories of his past boxing glories. It so happens it is the 5-year anniversary of Adrian’s death, and Rocky, as he has done each of the previous 5 years, goes back to the old neighborhood to relive his fond loving memories of Adrian, like the pet store, the skating rink, their apartment, and Mick’s boxing gym. Rocky misses Adrian so much he cannot get over her. She is like a ghost who dominates his every waking moment. (9/10)
Movie Quality: 9.5/10

This collection did not receive the royal treatment as one would have expected, but is many times better looking than the DVD collection which I have seen countless of times. The original “Rocky” is presented MPEG-2 which is the same transfer as presented on the previous Blu-ray release. I found both “Rocky IV” and “Rocky Balboa” to have the best transfers out of the entire set with “Rocky Balboa” practically being a demo worthy release. The problem with most of the films in this set from “Rocky II” to “Rocky V” have some inconsistencies such as grain that does become intrusive in many scenes. Colors are soft in the first three “Rocky” films with a lack in details. Things change with “Rocky IV” as it has a very vivid color palette looking very good. There are also excellent details throughout the film. “Rocky V” has the most grittiest look out of all the “Rocky” films in this set. Grain levels do take a few spikes and colors were on the dull side. “Rocky Balboa” has the best looking image of the whole set as the print is demo worthy. From the strong colors to the exceptional details, fans will not be disappointed at the slightest.

The audio is presented in DTS-HD MA lossless 5.1 mix for the first 5 films, while “Rocky Balboa” is presented in Uncompressed PCM 5.1. The first three “Rocky” films are probably the weakest of the bunch in this set in terms of taking advantage of the soundfield.They are more of a front heavy experience with the occasional sound effects and score creeping through the rears into the soundfield. Even at this point, the rears do not get that extra omph one would expect. The last three “Rocky” films is where things start to pick up with each release where they take full advantage of the soundfield, adding dynamics to the soundfield such as panning effects which was missing in the previous three efforts. Things end very well for this set with demo worthy audio for “Rocky Balboa”.

Finally MGM releases the entire “Rocky” saga to Blu-ray in high definition, but this set still did not receive the proper treatment as the video and audio could have been better on a few of the earlier releases. Then add that we only have extras offered from “Rocky Balboa” and a collection of bonus features for the remaining five films. Fans will not be disappointed and will want to upgrade to the Blu-rays if this is an option. It could be years before these films receive the full high def treatment with proper remastering, so enjoy them now.
Overall Rating: 8.5/10