Posted in DVD Reviews by George Theofanopoulos on 19 July 2011
What’s a wallaby to do when he’s surrounded by annoying neighbors, freeloading pals, heaps of laundry and the weight of life in general? Why, turn to his loyal canine, Spunky, and dim-witted best pal, Heffer, to help him confront the trials and tribulations of modern life. Season One tosses Rocko and his pals into the surreal worlds of the DMV, the carnival, health clubs, vacuum cleaners, bath time, trash day and, of course, the ongoing battle with the cruel and petty Ed Bighead. The best part? You can now get all of Rocko’s Season One escapades on two hilarity-packed DVDs! 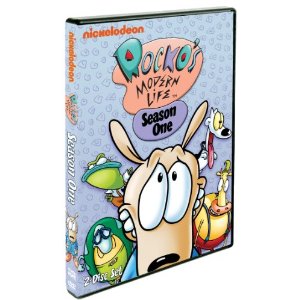 These DVD’s are being made the old fashioned way and being released by Shout! Factory. The fact that Shout! now has the rights to this classic Nickelodeon show is a promising sign as far as I’m concerned. They often try their hardest to gather and create some special features for fans to enjoy and if nothing else at least this time you are getting the complete first season, all episodes included.

*Worked on by the man who would later create Spongebob Squarepants, Stephen Hillenberg, Rocko’s Modern Life is a classic show from the best days of Nickelodeon and its animated series’. Rocko, our favorite wallaby, moves from down under and begins a new life in O-town. A small burb that is corporately owned by a company called Conglom-O, their slogan, “We Own You”. With his new friends Hefer Wolfe, a cow raised by a family of wolves, Filbert, a paranoid obsessive compulsive turtle (think Woody Allen), and his dog Spunky, he has a series of misadventures trying to cope with the absurdities of modern day life. You can’t forget his neighbors the Big Head’s, Ed always had an agenda against Rocko and his friends while his wife Bev was always quite fond of Rocko, perhaps too much so.

1 No Pain, No Gain / Who Gives a Buck?
2 Leap Frogs / Bedfellows
3 Jet Scream / Dirty Dog
4 Keeping Up With the Bigheads / Skid Marks
5 Power Trip / To Heck and Back
6 The Good, the Bad, and the Wallaby / Trash-O-Madness
7 Spitballs / Popcorn Pandemonium
8 A Sucker For the Suck-O-Matic / Canned
9 Carnival Knowledge / Sand In Your Navel
10 Cabin Fever / Rinse and Spit
11 Rocko’s Happy Sack / Flu-In-U-Enza
12 Who’s For Dinner? / Love Spanked
13 Clean Lovin’ / Unbalanced Load

That will be all twenty six 11 minute segments or all thirteen complete 22 minute episodes depending on how you look at them.
Movie Quality: 7/10

If you’re a fan of Rocko’s Modern Life, pick this up. It’s $15 or less, and is well worth the price. Help ensure that these sets keep coming by picking up this volume.
Overall Rating: 6/10