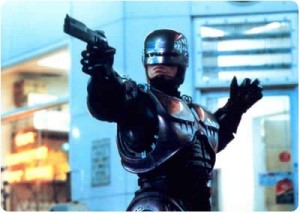 The first Robocop was thrilling, hilarious, and totally original–none of which has as much to do with the film’s spawning two sequels (plus two separate television shows) as its $50 million-plus take at the box office. Though the Law of Diminishing Returns inevitably applies to the theatrical trilogy, the central premise is so strong that each of the lesser sequels has at least a few moments worth catching. That’s because the original (wherein Detroit cop Peter Weller, killed in the line of duty, gets transformed into a crime-fighting cyborg) set up an entire world. Director Paul Verhoeven spends as much time lampooning television news, commercial products, and big business as he does on the story; however violent or gory things get (and they get quite icky), the tone throughout is comic, even giddy. Robocop 2, helmed by Irvin Kershner of The Empire Strikes Back fame, sobers up considerably. The film is rather underrated; sure, there are fewer ads and newsbreaks this time around, but there are several inventive touches–Robocop is briefly reprogrammed into a homily-spouting Dudley Do-Right; drug dealers step in to bail out the financially strapped city–and the villains (including the most foul-mouthed, amoral 12-year-old in movie history) are less outrageous than in the first installment. Robocop 3, however, is profit-driven hash. Having Robocop (now acted by Robert John Burke) join a citizens’ uprising is a nice idea, and even the ninja android could have been fun, but the movie tries too often to be heartwarming, an emotion thoroughly out of place in this wickedly satirical series. 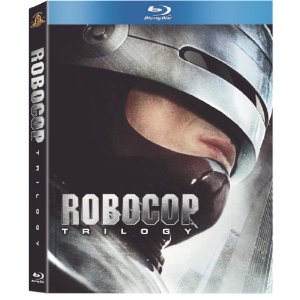 ROBOCOP – The ’87 blockbuster that started it all. Look, I’m well aware that this is not the “greatest” movie of all time, but it sure is my favorite. I grew up with it. I mean, true, the film’s violence is pretty nasty an’ unremitting even by today’s standards (in fact, movies have gotten TAMER since then), but once you get past that you’ll find an incredible world here that Paul Verhoeven created that has influenced many other films. It’s cold an’ cynical society is established through sardonic television news, commercial products, big business conferences, an’ the idea that the body of a hero cop killed in the line of duty could be used as the blueprint for a new brand of law enforcement (marketed not by the police force, but by a major corporation). The movie is wickedly satirical, but there is also an incredibly human story beneath the surface, as Robocop, the half-man/half-machine, begins to re-discover his past and what he was, which makes him further resent what he has been turned into. If you’re looking for the ultimate sci-fi movie, no need to look further.

ROBOCOP 2 – In some ways, ‘Robocop 2′ is a really underrated movie. I mean, it really is almost just as creative as the original in a lot of ways. During a huge citywide police strike, Robocop is the lone officer that patrols the crime-filled streets, now completely overrun with designer drugs and heartless thieves an’ criminals. The OCP corporation that created Robocop (and runs the city’s police force) is apparently oblivious to all. The chairman played again by Dan O’Heirley has gotten wildly out-of-control after his massive success with law enforcement, and decides to up the ante by creating a newer version of their original Robocop. I shouldn’t give too much away, but there’s quite a few cool touches to this one, although the film loses its bottom by the end and becomes almost a parody of itself. Overall an above average sequel that just barely falls short.

ROBOCOP 3 – Here’s the Robocop movie that you can skip, and not miss a thing. I don’t think there is one redeemable quality about this film. The plot is basically OCP running thousands of citizens out of their homes to make room for urbanization and high-rise office buildings. A small citizens’ uprising begins underground, raging guerilla warfare against the capitalist army. Robocop, sensitive to the little people as he is, decides to join them and assist the rebel forces in their crusade. Even the appearance of veteran actors like Rip Torn and CCH Pounder can’t save this awful mess. The story plays like an after-school special, with cheesy morals being plastered in your face, an’ awful dialogue an’ corny one-liners from every character that will make you wince with embarrassment. Peter Weller, who played Robocop excellently in the first two films, is replaced by Robert John Burke, and, although you wouldn’t think it would be all that noticeable due to Robocop’s limited dimensions, it’s annoyingly noticeable.
Movie Content: 7/10

The print is presented in 1080p/AVC MPEG-4 with a 1.85:1 aspect ratio. Many of us ‘Robocop’ fans have been waiting for a proper remastering of the 2007 release of ‘Robocop’ on Blu-ray. If you think that this time for the trilogy MGM has made an upgrade to the transfer, they have not touched anything with this print. It is a shame that we still have an MPEG-2 transfer here with ‘Robocop’ and not an updated release. Colors are kind of drab with the original 1987 film, the sequels tend to have a better picture quality in the color department. Black levels are good, but not great and could have used a bit more effort. Details and clarity are on the softer side than what I would have hoped. By the time we get to the third film, a lot of these issues are gone and we have a better looking image in high definition where colors pop and there is much more details.
Video Quality: 9/10

The audio mix is presented in DTS HD 5.1 Master Audio lossless track. I found the audio mix to follow the same pattern as the video with the 1987 ‘Robocop’ having that complete 80’s action film sound that sounds rather hollow to the more dynamic audio mixes with the later two films. The soundfield is very dynamic at all times with bullets panning in the background and explosions occurring.  With each film the mix sounded more and more aggressive. Dialogue is also well placed in the center channel sounding crisp and clear.
Audio Quality: 7.5/10

‘Robocop’ is a modern science fiction masterpiece. The future is not black and white, as most sci-fi tales conform to. It is a utopia of white-teeth propaganda but its black tarred heart beats a dystopian horror. ‘Robocop’ has been misunderstood simply as an eighties violent action picture. It is a lot more than that. The third title in the series no longer stars Peter Weller and is borderline silly with a flying Robocop and none of the fierce satirical force of its predecessors. If you are a fan of the ‘Robocop’ franchise than you will want to pick up this set since you can’t get part 2 and 3 without buying the trilogy.
Overall Rating: 7/10