A classic tale of self-discovery, romance, and adventure, Rio is the story of Blu, a flightless macaw who was taken from the forests of Rio de Janeiro as a young bird and raised by a kind girl in a small Minnesota town. When an ornithologist comes to town and informs Blu’s now-grown owner Linda that Blu is the last male of his species, Blu and Linda return to Rio so that Blu can mate with a feisty female named Jewel. Thus begins an adventure in which Blu encounters everything from the complexities of courtship and love, to thugs involved in an exotic animal theft ring, strange new friendships–including one with an overly friendly slobbering bulldog–and a crazy ride through a Carnaval parade. Blu and Linda both mature as a result of their journey in Rio, and love ensures that life will never be quite the same for either ever again. The animation in Rio is quite impressive, the characters are endearing, the Brazilian music is very appealing, and the star-studded voice cast includes Anne Hathaway, Jesse Eisenberg, Will i Am, Wanda Sykes, Jane Lynch, George Lopez, and Jamie Foxx. While the story doesn’t really offer anything new–instead playing much like a rehashing of some of the major plot points from movies like Madagascar, Finding Nemo, and Babe–that doesn’t mean the film isn’t perfectly entertaining for both kids and adults. 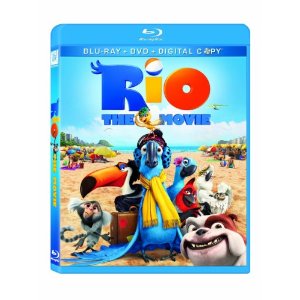 The best single word I can use to describe the film Rio is ‘vibrant’ as it’s the colors that really hit you. One can see why, when you’re doing a story about birds, setting it in Brazil with its dazzling variety of brilliantly multicolored avian species is a truly inspired choice.

The story begins when a baby blue macaw in the Brazilian rain forest falls (literally) into the hands of exotic animal poachers and ends up being shipped to the US where, by a fortunate accident, he ends up being adopted by a young girl named Linda in a small town in, of all places, wintry Minnesota. A quick flash forward shows girl and bird, which she names Blu, growing up together, to fifteen years later where Linda is now an adult who owns her own bookstore. The thing is though, Blu, raised as a house-bird, never learned how to fly.

The plot really begins when a Brazilian ornithologist named Tulio comes to Linda’s store, having learned from her web-site that she’s the owner of Blu, who apparently is one of the last male blue macaws in the world. Despite getting off on the wrong foot with Linda, he eventually persuades her to come with him to Brazil so that they can mate Blu with a female blue macaw named Jewel that they’ve managed to capture. Once there, however, the mating plan hits a snag as Jewel wants only to escape back to her jungle and has nothing but disdain for Blu, who only wants to get back with his human. Further complications set in when both birds are stolen by exotic animal black-marketeers who intend to sell them to the highest bidder. The two birds, though chained together, manage to escape, but it’s rough going, particularly when Jewel discovers that Blu can’t fly and she can’t fly away while she’s chained to him, and the bird thieves are hot on their trail, right in the middle of Brazil’s biggest and most flamboyant of all festivals, Carnival.

Director/writer Carlos Saldanha goes the distance in bringing some authentic Brazilian touches to the film. I particularly liked the way in which he brought out how everyone in Brazil is soccer-crazy, with good guys and bad constantly being distracted whenever a game is on.
Movie Quality: 8.5/10

The print is presented in 1080p/AVC MPEG-4 with a 2:40:1 aspect ratio. The CG animated animals and people of Rio de Janeiro come to life with added levels of depth and pop-out effects. The vibrant colors of the city and jungle landscapes match the outstanding quality of sound. The times when characters appear to come out of the TV isn’t gimmicky or done solely for audience reaction. The 3D effects definitely add to the overall enjoyment of the movie. The sound quality is amazing and the musical sequences are spectacular.
Print Quality: 10/10

The audio is presented in a DTS-HD MA l0ssless 5.1 mix. The opening scene hints at what is to come and features a pounding Brazilian beat with a multitude of birds singing and squawking. Dialogue is clear throughout the movie and background sounds are frequently worked into the mix.
Print Quality: 9/10

Highly recommended for anyone who enjoys beautifully colored animation, engaging characters and good basic storytelling. This has to be one of the most visually impressive looking Blu-ray’s to grace the format due to the use of colors that pop.
Overall Rating: 7/10