When you put two of the greatest actors of all-time together in a film, you expect pure gold as the end result. The real problem is that both men have aged considerably and the last few years they haven’t taken on the best roles for their careers. This is the third time that both Robert De Niro and Al Pacino have been in a film together. The first time was in ‘The Godfather II’ where they never shared screen time and the second film was ‘Heat’ where they only had a few minutes together on screen. Things didn’t go as well as everyone expected with the film being panned by critics and only bringing in a worldwide box office total gross of $70 million dollars.

The story of ‘Righteous Kill’ centers around two veteran NYPD detectives that have been partners for many years. Rooster (Al Pacino) and Turk (Robert De Niro) are on hot on the trail of catching the killer that has been taking out other criminals. These criminals have found a way to defeat the judicial system from going to jail. While both NYPD detectives are close to retirement, they are still on the streets moving around if they were twenty years younger. They are not alone, they have two younger detectives in Simon Perez (John Leguizamo) and Ted Riley (Donnie Wahlberg). Then throw in forensics expert Karen Corelli (Carla Gugino) that is also helping out with the case.

Both Turk and Rooster are running against the clock as they try to catch the killer before they are going to be retiring, which is fairly soon. Expectations have been very high for years on seeing two iconic film actors on screen together for longer than 10 minutes. If you can for a few minutes drop those expectations, ‘Righteous Kill’ is an enjoyable film. Not only are two of the greatest actors of all-time headlining this film, there is also John Leguizamo, Donnie Wahlberg, Brain Dennehey, and Carla Gugino that round out the rest of the cast. This is an excellent cast stuck in a screenplay with many holes. The characters themselves do lack some depth, but it is Al Pacino and Robert DeNiro that hold things together.

One of the problems here is that we have seen this kind of film one too many times. There is nothing too original here and what made the scenes so good in ‘Heat’ between Pacino and DeNiro is missing here. While in ‘Heat’ they were adversaries of each other, here they are partners. They could have played off of each other very well if the screenplay allowed it. There is a twist to the film, yet many had figured it out from the first few scenes. It is small scripting issues like this that I would keep my expectations rather low.
Movie Content: 3.5/5 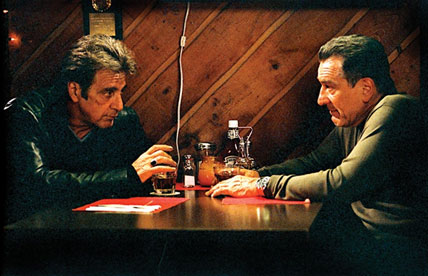 The print is presented in 1080p/AVC MPEG-4 with a 2.35:1 aspect ratio. Lionsgate provides a pretty good transfer on Blu-ray. Colors are rich and vibrant providing a well saturated print. Blacks are deep. Flesh tones are accurate and natural, but there were a few scenes that were a bit too bright at times. Details are fairly good. There is some slight, subtle film grain throughout the print. The one negative is that there is a little bit of edge enhancement, the dreaded EE as some call it. But it is nothing that becomes distracting.
Video Quality: 4/5

The audio is presented in Dolby TrueHD 5.1 mix. I was rather surprised by the mix as this film is more dialogue driven, yet the surround effects are engaging in the soundfield. Anytime there are gunshots in the mix, you can hear bullets whizzing by from the rears. The soundtrack sounds well in the soundfield helping keep things at a decent level with the atmosphere. Dialogue is clean as a whistle through the center channel.
Audio Quality: 4/5 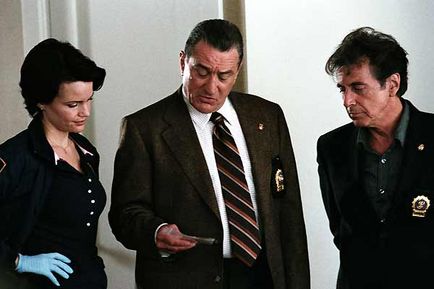 Features are presented in both standard and high definition.
Special Features: 3.5/5

‘Righteous Kill’ is an entertaining film starring two classic iconic actors. I highly recommend when going into this film that your expectations should be rather low. On Blu-ray, the video looks and sounds good that will make fans of this film happy.
Overall Rating: 3.5/5 (Rental)