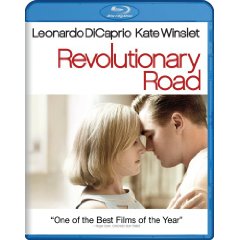 In Revolutionary Road, Kate Winslet and Leonardo DiCaprio reunite for the first time since their careers exploded with Titanic–and it’s almost as if they’re playing the same characters, only married and faced with the hollowness of a 1950s suburban existence. Frank and April Wheeler (DiCaprio and Winslet) always thought of themselves as special, but they settled in a conventional Connecticut suburb when they had children. Hungry for a less constricted life, April persuades Frank to move to Paris–but slowly their plans unravel and their marriage unravels along with it. While Revolutionary Road may be a bit too glib about suburban emptiness–the lives Frank and April lead don’t seem so stifled–the portrait of a mismatched marriage is vivid and devastating. The ways that Frank and April misinterpret each other, and the subtle yet unbearable dissatisfaction they feel, is rendered with remarkable and unsettling acuteness. Winslet and DiCaprio’s natural chemistry tells us what drew these two together, making the way they tear each other apart all the more shocking. The excellent supporting cast includes Kathy Bates (Misery), Dylan Baker (Happiness), and especially Michael Shannon (Bug) as a mentally troubled mathematician who cuts to the quick of the Wheelers’ troubles. Mention must be made of the beautiful production design; the costumes and sets are simply gorgeous.

Kate Winslet and Leonardo Di Caprio are brilliant in this very sharp satire of American life and practice in the 50s in the USA.The film has many layers to it, and it posits a dissatisfaction with life in particular and in general in a world that is completely artificial. The dramatic escape plan, suggested and then demanded by the wife, is merely an extension of the American sense of se;f removal to another “site” in order to get going with USA values. It does not work.

The breeding family of then and now comes under scrutiny and is found wanting; religious values or ideas are not in evidence, and so there is no leadership in this quarter nor in any other quarter. What the film exposes too are the absurd verbal solutions to problems, hence the wife constantly asking her husband to shut up, and he will not do so, as babble takes over for reason and engulfs the wife and the whole neighborhood.

What keeps the structure of society in this film going are cliches, notions, attitudes, phrases that preach and teach nothing. The fear of the wife and her final actions have the quality of truth when set beside the options she has..suburban death, chronic dissatisfaction on all levels. I will say that I was very depressed by the end of the film and it left me with a very empty feeling in my stomach.
Movie Content: 9/10

The print is presented in 1080p/AVC MPEG-4 with a 2.35:1 aspect ratio. The print looks very good throughout without any apparent issues. Colors are vibrant and carry pop which brings out the fine details. The detailed scenes stand out very well. Blacks are deep. I found the print to be crystal clear with no artifacts or print damage. The time piece being set in the 1950’s really shows off really well in high definition.
Video Quality: 9/10

The audio is presented in Dolby TrueHD 5.1 mix. This is not an audio mix that you will go in expecting huge things from the soundfield as it is primarily a dialogue driven film. The dialogue is clean and clear through the center channel with no apparent issues. I was rather happy with the way the film sounded considering that this was more of a dialogue centric film.
Audio Quality: 8.5/10

All special features are presented in high definition.

‘Revolutionary Road’ is a great film with a lot of twists and turns that will leave many with a heart depressed by the film’s end. Both Winslet and DiCaprio put on some of the best performances of their careers. All special features are available in high definition which is a plus. I highly recommend ‘Revolutionary Road’, but do not expect a feel good film going in.
Overall Rating: 9/10