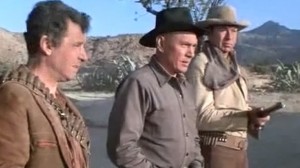 The legendary Magnificent Seven thunder through Mexico and make cinematic historyagain! StarringAcademy AwardÂ(r)winner* Yul Brynner and a stellar supporting cast that includes Robert Fuller, Warren Oates and Claude Akins, Return of the Magnificent Seven features Elmer Bernstein’s OscarÂ(r)-nominated** score and raises the bar for rugged western adventure to a new, heart-stopping level!It’s been six years since Chico (Julian Mateos) rode with Chris Adams (Brynner) and his band of gunslingers. It was then that he married the beautiful Petra (Elisa Montes) andpromised to lay down his weapons forever. But when the cruel outlaw Lorca (Emilio Fernandez) beginsto terrorize his village, Chico, Chris and five new brave gunmen must ride again. Now, with the odds against them, the heroic seven emerge with guns blazing to face the shootout of their lives and what may be their final battle!

Studio: MGM Year: 1966 Release Date: August 2, 2011 Run time: 95 minutes Rating: R Audio: DTS-HD Master Audio 5.1 mix Aspect Ratio: 2.35:1 Disc Spec: 1 BD Region: A The original ‘Magnificent Seven’ was, well, magnificent. ‘Return of the Magnificent Seven’ is, well, pretty good. No ‘Magnificent Seven’ sequel could ever stand up to the original. THE ‘Return of the Magnificent Seven’ appeared in theaters six years after ‘The Magnificent Seven’. Yul Brynner reprised his role as Chris. It is unfortunate that Brynner was the only cast member to return. There are conflicting stories as to why Steve McQueen opted out of this film. Some sources state that McQueen’s inflated ego and need for artistic control caused him to decline offers for this film. Others note that Brynner himself insisted that McQueen not be involved in the project. In ‘Return of the Magnificent Seven’ Robert Fuller filled McQueen’s role as Vin, though the character bore very little resemblance to McQueen’s Vin. The character of Chico was revived, but Horst Buchholz was likewise not involved in the project and the role went to another actor. In this sequel (remember there were two additional subsequent films) Chris recruits five gunmen to accompany him back to the same Mexican village he defended several years earlier. A Mexican warlord has enslaved all of the men in the village and force-marched them to his own half destroyed town where the men are put to work rebuilding the place. One of the captives is Chico, who as you may recall was an original member of the Magnificent Seven, the one who chose to stay behind and become a farmer. The Magnificent Seven liberate the prisoners, but the warlord and his private army return to the devastated village in force. Once again the Magnificent Seven are called upon to rally the farmers to challenge the Mexican leader and his small army. Under Chris’ guidance they fortify a ruined church into something akin to a small Alamo and fend off repeated attacks by the enemy. Movie Quality:7/10

The print is presented in 1080p/AVC MPEG-4 with a 2:35:1 aspect ratio. Fans of the film will be disappointed when it comes to the original film in this department. Where the first film was strong in the area of the print being cleaned up rather nicely, ‘Return’ has one very dirty looking image. There are a lot of white specs and dirt floating all over the image. Colors are also in the softer area which left me disappointed. Grain is present, yet it seems to fluctuate. I didn’t find the image to be as clear as the first film which is a real shame. Print Quality: 6/10 The audio is presented in a DTS-HD Master Audio 5.1 mix. The audio mix is very similar from the first film on Blu-ray with nothing really being different. This mix is good for being upgraded to DTS-HD MA 5.1 filling the soundfield with the score and guns blazing. The film is still front heavy due to the audio design, but when the rears do get action they their not faint. Also the iconic Elmer Bernstein theme has also never sounded better. Dialogue comes through the center channel very clear and crisp. I found the dialogue to be much clearer with this new mix. Print Quality:9/10

The ‘Return of the Magnificent Seven’ is in part a thinly veiled remake of the first film. However in other aspects the story is a little more complicated. On Blu-ray the film is a bit of  a mess when it comes to the print quality, while the audio mix is well done. Overall Rating: 6/10