Report to the Commisioner DVD Review

Posted in DVD Reviews by George Theofanopoulos on 07 July 2011
This action-loaded drama set in New York City stars Michael Moriarty as a naive rookie cop whose youtful idealism thrusts him into an interdepartmental power play with disastrous consequences. 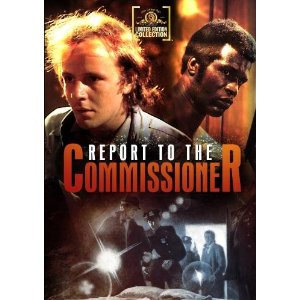 This is one of the best crime films from the 70s, on par with The Friends of Eddie Coyle, The French Connection and some of Sidney Lumet’s films. But, contrary to Amazon’s credits here, Richard Gere is NOT one of the main stars of this film (one of his first, I guess). He has like 5 minutes of screen time as a sleazy pimp. The main stars are Michael Moriarty, Yaphet Kotto, Susan Blakely and Hector Elizondo, amongst others, all of whom do a fine job. I have not seen it on disc yet, so I am not aware of the transfer quality. I recently purchased one of MGM’s limited collection, QUEEN OF BLOOD, which looked excellent.

Report to the Commissioner is a nice look at the Seventies in New York and a great police drama. You will agree that Yaphett Kotto gave Moriarty the best advice about knowing the players in a given situation.
Overall Rating: 9/10