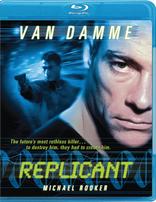 Jean-Claude Van Damme (star of Timecop and Universal Soldier) plays two roles in this surprisingly good action thriller. Replicant also stars Michael Rooker (of Henry, Portrait of a Serial Killer, The Replacement Killers) as Jake Riley, a cop who’s been tracking a serial killer called “The Torch” (Van Damme). Frustrated, Riley decides to retire–and the National Security Department makes him an offer: they’ve cloned “The Torch” as part of a program to track down terrorists; they’ll turn this replicant (Van Damme again, of course) over to Riley as a sort of test run for the program. The idea is that the replicant will slowly recall the original person’s memories and lead the cops to the original. It’s ridiculous, but no more ridiculous than the setup for the highly successful Face/Off, and it works just as well as the engine for an effective action flick. What makes Replicant more unusual is that the writers actually put some thought into the relationship between Riley and the replicant, which starts to mirror parent-child relationships in emotionally complex ways. Furthermore, while it’s no surprise that Rooker gives a solid performance, it is surprising that Van Damme does just as good a job in both of his roles–he’s perfectly creepy as the serial killer and genuinely affecting as the quickly developing replicant, projecting a mixture of innocence and turmoil. Replicant was directed by Hong Kong director Ringo Lam, the man behind Full Contact and City on Fire. He was clearly working on a limited budget, but the movie looks good, moves with lean efficiency, and has some riveting action sequences and good quality effects–the scenes where Van Damme (inevitably!) fights himself are completely convincing. A satisfying movie.

During the movie we find out more about the murderer and kind of get an inside scoop of how this murderer lives and why he’s doing all these killings. I’m not going to spoil it for you but let me tell you, this guy is a sick puppy, anyone who has watched Van Damme movies in the past will be shocked at the role he’s playing now. The Replicant meets up with the murderer a few times and each time the Replicant starts to bond with the murderer, since he can think how the murderer thinks, and given enough time, he could read the murderers mind completely. At first the murderer doesn’t know who the Replicant is but then he eventually finds out.

The print is presented in 1080p/AVC MPEG-4 with a 1.78:1 aspect ratio. I found the print to be good for a low budget film, but there were some issues that had me wondering with the original director’s intent. Colors are on the soft side, some of that has to do with the lighting of the film. Which tends to affect fleshtones as they do not look accurate. While blacks are strong, they also caused a few issues. Details are excellent with nice amounts of clarity. The image is pristine with no apparent issues such as dirt or specs.
Video Quality: 8/10

The audio is presented in DTS-HD MA lossless 5.1 mix. While the video has a few minor issues, the audio is excellent for a catalog title and Lionsgate delivers again. This is a very dynamic audio experience that caught me by surprise. You will hear bullets panning the speakers in the background. The effects pull you into the soundfield with each and every action scene. Dialogue is clean through the center channel.
Audio Quality: 9/10

‘The Replicant’ may not be Jean Claude Van Damme’s most excellent piece of work, it is one of his better films later in his career. All we need now is for some of his gems like ‘Bloodsport’ and ‘Hard Target’ to release on high definition. If you are a fan of Van Damme, this is well worth adding to your collection.
Overall Rating: 8/10