Beverly Cleary fans will love Ramona and Beezus, a peppy, affectionately directed film based on the series of Cleary’s children’s books, starring the adorable, awkward Ramona Quimby. Ramona and Beezus manages to appeal to three distinctly different audiences–tweens, because of its heroine, played with winsome agility by the adorable Joey King; teens, because of the presence of actress-singer Selena Gomez as Beezus (short for Beatrice), the hapless Ramona’s older sister; and adults, because of the great casting of the girls’ parents, Bridget Moynahan and especially John Corbett. There’s also a romantic sub-story involving Ramona’s Aunt Bea, played by Ginnifer Goodwin, and a neighbor, Hobart (Josh Duhamel). But the star of this film, as with the Cleary books, is Ramona, the imaginative, active, creative, and sometimes lost-in-her-own-world 9-year-old, whose best intentions have a funny way of nearly always going awry. Ramona and Beezus is adapted from several of Cleary’s books, and readers will recognize many of Ramona’s escapades and mishaps. And perhaps surprisingly, they knit together to make a fine, cohesive family film–the cast interacts well together, especially King and Gomez, whose sisterly chemistry is adorable. There are several laugh-out-loud moments, including a really, really bad cooking incident, and the most creative accidental paint job ever perpetrated on a Jeep. But there’s pathos too, and real family emotion, and there are a few teary scenes that make Ramona and Beezus that much more endearing. My 10-year-old companion pronounced it “awesome,” “believable,” and “really, really funny, with good music.” Beverly Cleary fans of all ages will agree. 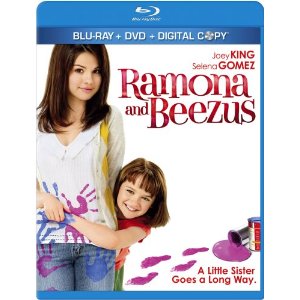 In Portland, Oregon dwells Ramona Quimby who is nine years, three months old and, despite her older sister Beezus’ assertions, isn’t at all a pest or a nuisance (except that she is). Ramona’s big imagination lends to plenty of daydreaming and playacting and silly shenanigans, and the rest of the kids in her class think she’s daft, her teacher rendered bemused and resigned. Ramona means well, has a big heart, comes from a loving family, but she’s like Pollyanna and Walter Mitty and an incoming wrecking ball all rolled into one.

The story’s conflict surfaces when Ramona and Beezus’ dad gets laid off and suddenly, for the Quimbys, there’s penny pinching and the hovering threat of losing their house. Things like this will sometimes have a bigger impact on the children. Ramona not only becomes terrified of losing her home but, after dialogue with a snotty classmate, she also dreads the possibility of her parents divorcing and maybe having to move to Tacoma. Ramona determines to remedy all this. Everyone take cover.

Based on Beverly Cleary’s beloved children’s books, “Ramona and Beezus” and its rest strictly on Joey King’s shoulders (Selena Gomez only has a supporting role, really). And to lift one of Ramona’s made-up words, Joey King’s presence makes this movie all the “funner.” It’s a fine line to toe, I think. Ramona gets into so many scrapes that inconvenience so many people that it would’ve been disastrous if the filmmakers had tapped the wrong girl to play her. It would’ve been all too easy for the audience to perceive Ramona as annoying and even unsympathetic. But Joey King is awesome and so very likable, and she works the crowd with that infectious giggle and that marvelously expressive face and a certain irrepressibility. How could you not forgive her her well-intentioned screw-ups?

The rest of the cast is really good, especially John Corbett who plays Ramona’s understanding, nurturing father. Ramona’s interactions with her father and with her sister Beatrice (forever known as “Beezus”) prove the backbone of the story. I enjoyed watching the sisters’ relationship unfold. Ramona, always in trouble about something, fears that she’ll never do as well as Beezus who always garners straight A’s and is well liked by everyone. And so maybe the turning point for Ramona is when she gets those words of encouragement from Beezus at the end of that one sad evening.
Movie Content: 9/10

The print is presented in 1080p/MPEG-4 with a 2.40:1 aspect ratio. Colors are deep and well saturated throughout the entire presentation. Blacks are strong and almost inky at times. Nowhere did the image ever appear soft with such strong colors and black levels. Flesh tones were also natural. There is some subtle grain in a few scenes, but never a distraction. Fans of the film will not be disappointed.
Video Quality: 9/10

The audio mix is presented in DTS HD 5.1 Master Audio lossless track. “Ramona and Beezus” is a dialogue-driven film that is mostly front and center channel driven. There really wasn’t anything that stood out, audio-wise especially for the surround channels. If anything, it’s all about the dialogue and the dialogue on the lossless soundtrack is crystal clear. I detected no hiss or any audio problems while watching the film.
Audio Quality: 9/10

Watching “Ramona and Beezus,” I was reminded of 2008’s “Kit Kittredge: An American Girl,” which stirred within me the same feelings of fun, adventure, and nostalgia while maintaining a sense of reality. It also gave me everything I looked for and missed in this year’s “Diary of a Wimpy Kid,” namely the sense that childhood, family, and friendship were accurately being depicted.
Overall Rating: 8/10