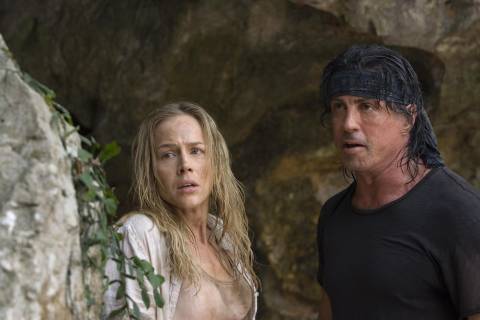 If you’ve been wondering what ever happened to ex–Green Beret superwarrior John Rambo since he singlehandedly shot up a Pacific Northwest town (First Blood, 1982), returned to the jungles of ‘Nam to free U.S. POWs held long after war’s end (Rambo: First Blood Part II, 1985), and interrupted the Soviet invasion of Afghanistan long enough to blow lots of stuff up and rescue his old commandant from the Reds (Rambo III, 1988), then Rambo (2008) is for you. Without so much as a IV to dilute the brand name, Rambo–which is what most of us called the second, most iconic film in the series–may aspire to open a new era for a pop legend. But it’s a thoroughly mechanical attempt to reanimate a franchise that, absent the anger, frustration, and self-loathing of the post-Vietnam years, has no meaning or purpose. For some time now Rambo (Sylvester Stallone) has been putt-putting along the Thai-Burmese border in a longboat, catching exotic snakes to sell. As for the 60-year civil war in Burma between the brutal government and the Karen independence movement, he ignores it. Enter a party of American missionaries whose dewy blond spokeswoman (Dexter’s Julie Benz) asks Rambo to haul them upriver so that they can bring medical aid to the insurgents. After the requisite number of monosyllabic refusals, he does. Soon afterward the do-gooders are in a world of hurt, and he’s summoned to lead a squad of mercenaries on a rescue mission. 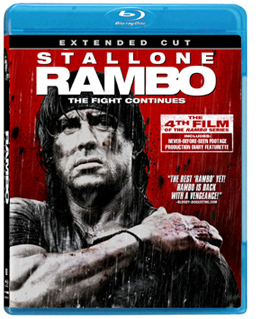 Parts of this review are replicated from the previous Theatrical Cut review.

‘Rambo’ went through several name changes before the ‘Rambo’ title was set in stone. Before that, we had ‘First Blood IV’, ‘Rambo IV’, and then ‘John Rambo’ which was its title for a good 7-8 months before it was changed to just ‘Rambo’. Sylvester Stallone did not want this movie to be in any way believed to be the final movie in the series like the ‘Rocky Balboa’ titled finale. The rumors have begun circulating that we might see a fifth ‘Rambo’ film in the near future as Sly continues to bring resurgence to his career.

Sylvester Stallone makes his return as John Rambo living outside of Thailand, near the war torn Burma. Rambo is a snake catcher as the movie begins, and he catches Cobra’s, Python’s, and all venomous snakes that he sells to snake fighters. While Rambo is done selling the Cobra that he caught, a bunch of missionaries make their way to him asking if he could take them up to Burma. The missionaries want to help the Burma people. After Rambo continually tells the missionaries that he won’t take them up the river, he breaks down and decides to take them to the Burma jungle.

This is where all the problems begin; the missionaries get caught in the middle of a hostile takeover of the village that they were in trying to help in. The missionaries are captured and at this point John Rambo is called in to take a group of mercenaries to the drop off point so they can find the missionaries.

There is a lot of violence in ‘Rambo’, which some might enjoy and others may not. After having watched Rambo and having read countless reviews, people are still not too certain as to the meaning or approach that Sylvester used for this movie. There are a lot of political undertones in this movie and I feel like I am watching a George A. Romero movie from the undertones aspect of film. Politics come into play here and this is more international politics as the movie opens up with real actual documentary footage of the chaos going on in Burma. The missionaries are really frightened and upset when Rambo first kills these ship pirates, but later we see one of the missionaries have to kill so they could survive. It is almost like a contradiction of the characters, but I believe that Sylvester is trying to drive home a message. His message is that even people that are against a particular stance, if it comes down to their own lives at stake that they will do what is needed to survive going against their own beliefs.

I really enjoyed Rambo and couldn’t believe how fast the movie was over. The action is non stop from the point that John Rambo joins forces with the mercenaries all the way to the end. The extended edition is more of a bloodbath adding more gore that was taken out of the theatrical release, so those that are light hearted for this type of stuff will probably want to rethink watching Rambo. I found Rambo to be the second best movie in the series and while I was hoping that this is the final one as the ending lent to capping off this series very well rumors have been circulating about a fifth installment. On a side note, Stallone looked huge for a 62 year old man; I wonder what he has been taking.
Movie Content: 9/10

The print is presented in 1080p/AVC MPEG-4 with a 2.40:1 aspect ratio. Just like the theatrical release on Blu-ray nearly 2 years ago, this film is breathtaking with the Extended Cut. Colors are a real highlight of the print and bring the vegetation in the jungle to life. If there is a Blu-ray to show off jungle scenes, this is the one to do that. Then add the deep color red when being rather prominent when Rambo kills. Black levels are strong throughout. Night scenes also look very good throughout the film with the use of proper lighting. The water scenes are actually very clear and detailed with the water holding a murky look. Facial details are excellent and a good example is where you get to see every detail especially in Rambo’s face where there is an intentional scar. There is a small hint of grain throughout the film, which never becomes intrusive. This is a fairly sharp looking print, yet still holds a grittiness tone. I was just as impressed viewing the Extended Cut as I did with the Theatrical Cut nearly 2 years ago on Blu-ray.
Video Quality: 9.5/10

The audio mix for ‘Rambo: Extended Cut’ has a DTS HD 7.1 Master Audio lossless track which is the same encode as the previous Theatrical release. The audio mix is a sonic boom from the point that action starts on the screen all the way to the final scenes of the film. The entire soundfield was filled with all kinds of bullets whizzing by and hard hitting fists. At all times I did feel like I was a part of the action, then add the intense firefight towards the end of the film which will blow the roof off of your house. Dialogue is clear and loud so you can hear perfectly what is being said. Lionsgate has found the perfect mix for both where they get equal footing.
Audio Quality: 9.5/10

As a personal fan of the ‘Rambo’ series, I suggest that fans check out ‘Rambo: Extended Cut’. This is one very well done Blu-ray release that is worth picking up. Like the original ‘Rocky’ began the series, ‘Rocky Balboa’ nicely capped that series……the same could be said with ‘First Blood’ beginning the phenomenon and ‘Rambo’ capping off the series, making all the sequels between part of the vehicle that adds to something greater to come in the end. Both ‘Rocky Balboa’ and ‘Rambo’ gave us more than the boxing or the one man mercenary being the central piece; we saw a different side to the character. The special features are totally lacking with this Extended Cut as opposed to what was offered in the Theatrical Cut. If you are a fan of John Rambo, I highly recommend picking up the new Extended Edition Blu-ray offering an extra 8 minutes of footage incorporated back into the film.
Overall Rating: 8/10