Posted in DVD Reviews by George Theofanopoulos on 30 April 2019

The final season of this “ever-sparkling comedic drama” (The Guardian, Australia) tackles the contentious world of politics, with disbarred lawyer Cleaver Greene (Richard Roxburgh, Moulin Rouge!) having won an Australian Senate seat on a campaign promise to do nothing. But even Cleaver’s low expectations fall short of the absurd reality, as he contends with a right-wing nemesis (Jane Turner, Kath and Kim), a noxious gas attack believed to be the work of terrorists, and a disastrous visit from the US defense secretary (Anthony LaPaglia, Without a Trace). Can Cleaver outmaneuver his cutthroat colleagues, or will his self-destructive behavior destroy his budding new career? 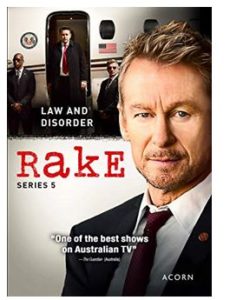 ‘Rake’ is such an excellent show, I seriously love this show, it just works, sure it’s not the Aussie version but so what? The Office wasn’t the Brit version either but once that got going in it’s own right the comparisons stopped! Give this show a chance, all good things come to those who wait! Gregg Kinnear plays the lead extremely well and the supporting cast also play their parts well. We really need some likable rogues on our TV’s rather than those depressing shows like the Following etc’.

This is the best character to come along on Fox since House, which was another slow burner, right? So come on Fox, you usually have a bigger set of “family jewels” than the other networks so stay the course! i would have given this show a 10 but i think it will go on to bigger and better things so I’ll save the ultimate accolade until then!

This show has that special something. Hope it stays on a long time so viewers can have a good laugh. Best wishes and much continued success. Thank you. Kathleen
Overall Rating: 8/10