Posted in DVD Reviews by George Theofanopoulos on 06 October 2011 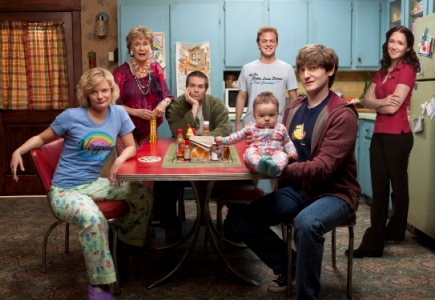 I just watched the season finale of “Raising Hope,” and I was struck by how much it seems like this show is old beyond its one year. The main cast is endearing, and the supporting characters are a delight. Well-written and funny, “Raising Hope” has the wackiness of “The Simpsons” mixed with the heart of “The Wonder Years.” I’d guess that everyone on this show loves going to work. Kudos to the cast and crew on an amazing first season! 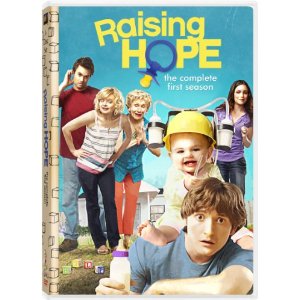 Martha Plimpton is a Tony nominated actress and a veteran of the stage. Here she’s the 38 year old mother of a 23 year old son, Jimmy Chance. She plays Virginia Chance and her performance is totally under-rated by the awards. Screw the Awards! Cloris Leachman also gives a great performance as a special guest star but she’s in almost every episode as Maw Maw, Virginia’s senile grandmother. Virginia, Maw Maw, and Jimmy Chance live with Virginia’s husband, Mr. Chance, who is a pool cleaner and landscaper. Virginia works all day cleaning toilets.

When Jimmy gets in a van with an escaped serial killer, they have intercourse. The next day, Virginia hits her over the head with a television set while watching the morning news. Nine months later in prison, Princess Beyonce is born on death row. At 7 months old, Jimmy and his baby watch the execution. Their state is not so forgiving. After all the mother was a female serial killer who targeted men.

Anyway that is how the show begins and I can’t imagine my Tuesday nights without them. The cast is first rate and the writing is also well-done. My question is where are the awards for this show and the recognition it deserves. Award shows always tend to favor the unusual but this show is blue collar and aimed for a mainstream audience in the country. A lot more people will relate to the woes and heartbreak of the Chance family than any other show on television.

Cloris Leachman should get another Emmy for best supporting actress. She is a scene stealer as Maw Maw and please give her full credit.
Movie Quality: 8/10

After watching two or three episodes of this show I realized it was already becoming one of my favorites. The Characters are funny, but not obnoxious. The writing is original and clever. If you give it a try, I think you’ll like it.
Overall Rating: 7/10