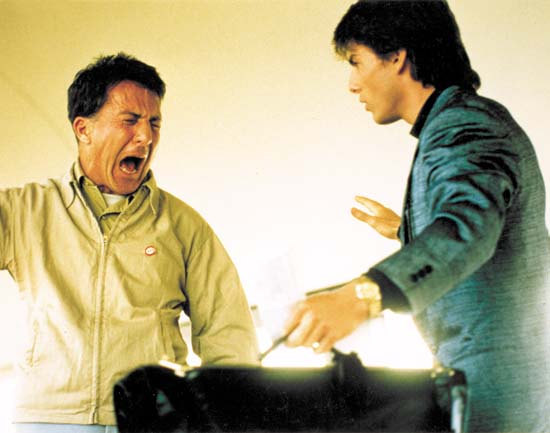 Rain Man is the kind of touching drama that Oscars are made for–and, sure enough, the film took Academy honors for best picture, director, screenplay, and actor (Dustin Hoffman) in 1988. Hoffman plays Raymond, an autistic savant whose late father has left him $3 million in a trust. This gets the attention of his materialistic younger brother, a hot-shot LA car dealer named Charlie (Tom Cruise) who wasn’t even aware of Raymond’s existence until he read his estranged father’s will. Charlie picks up Raymond and takes him on a cross-country journey that becomes a voyage of discovery for Charlie, and, perhaps, for Raymond, too. Rain Man will either captivate you or irritate you (Raymond’s sputtering of repetitious phrases is enough to drive anyone crazy), but it is obviously a labor of love for those involved. Hoffman had been attached to the film for many years, as various directors and writers came and went, but his persistence eventually paid off–kind of like Raymond in Las Vegas. Look for director Barry Levinson in a cameo as a psychiatrist near the end of the film. 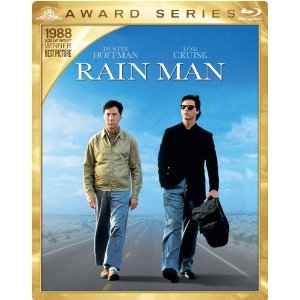 Have you ever had to communicate with someone on a different wavelength as you; for example because he speaks a foreign language and you don’t have an interpreter, or because he is unable to communicate verbally at all, or maybe just because you keep misunderstanding each other? If so, you know what a frustrating experience it is to have virtually no control over the situation and over making sure that you’re actually understood. And in precisely this situation finds himself Charlie Babbitt (Tom Cruise), personification of the 1980s’ yuppie, a used car dealer with major money problems whose only – tentative – personal attachment is to his current girlfriend Susanna (Valeria Golino). Because having learned that except for a few rosebushes and a vintage 1949 Buick Roadmaster his recently-deceased father has left virtually all of his considerable fortune to his autistic brother Raymond (Dustin Hoffman) – a brother he didn’t even know he had – Charlie decides to kidnap Raymond from the Cincinnati facility where he lives, take him to California, and demand half the inheritance in exchange for his brother’s return.

Now, Charlie isn’t the greatest communicator himself; at least as far as listening goes; he is used to talking people down, and if that alone doesn’t do the trick, he starts to yell. This, however, just doesn’t work with Raymond, who lives in a world of his own and, unable to express emotion in any other way, falls into a nervous tic when feeling threatened. So for the first time in his life Charlie has to learn to accept another human being for what he is, and work *with* his bewildering methods of communication rather than against them. And subtly, very subtly, Charlie begins to change, until at last he no longer wants to relinquish custody of Raymond even after having been offered a substantial amount of money: because now money is no longer an issue at all; now it’s all about genuine love for a newly-found brother and very special person.

“Rain Man” is ostensibly told from Charlie’s perspective; through his, the “normal” guy’s eyes we perceive Raymond’s habits, tics and strange behavioral code. And even if Charlie is easy enough to snub for his superficiality and materialism, his frustration at his inability to communicate with his brother feels genuine and is something we can empathize with(albeit perhaps inadmittedly). Tom Cruise plays Charlie with a finely-tuned mix of audacity and reluctant emotion; turning a role that seems to start out as just another Cruise cliche into a character who hesitantly comes to realize his own complexities and shortcomings and learns to appreciate sensitivity, compassion and love – yet, without ever taking the role that treacherous step too far into sentimentality.

Still, important as Charlie’s character is for this movie’s narrative, this is from first to last Raymond’s story; and by the same token Dustin Hoffman’s, because the two individuals are in fact inseparable: As Hoffman once explained in an interview, he rejects the notion that acting is merely about playing a role, or that the term “my character” could ever appropriately describe his approach to a role; emphasizing that in every part he plays, he truly has to *become* the individual in question to fully be able to understand and portray him. As such, his achievement with Raymond Babbitt is breathtaking indeed; for in a role which not only imposes severe limitations on his ability to communicate traditionally but also gives him virtually no opportunity to express emotion, he conveys Raymond’s frailties, unexpected strengths and, significantly, his profound humanity in a manner that lets you forget you’re even looking at a piece of acting, thus accomplishing that rare feat only attained by the greatest of actors – and even among Dustin Hoffman’s spectacular performances, this one stands out in particular. (He did, of course, win both the Oscar and the Golden Globe for this movie; but somehow even the industry’s highest awards don’t begin to express the significance of his achievement.)
Movie Quality: 9.5/10

The print is presented in 1080p/AVC MPEG-4 with a 2:35:1 aspect ratio. Having owned previous incarnations of the DVD release, especially the original 2001 DVD release, one thing I have noticed on Blu-ray is how vibrant the colors look on Blu-ray. From the golden weeds, the desert sand, and grass that surround some of the scenery in this film. You can literally see the shading, detail, and textures of clothing really shows how well this print has been restored. Blacks are nice and deep with there is a fine layer of grain. Colors are nice and strong throughout, yet there are a few several soft spots. If you are a fan and own the film on DVD, make sure to upgrade to the Blu-ray.
Print Quality: 9/10

The audio is presented in a DTS-HD MA lossless 5.1 mix. This is a huge upgrade from the Dolby Digital 5.1 mix on the original DVD release. As the majority of the film features dialogue, the lossless soundtrack does a good job in making those scenes quite immersive by utilizing every channel. You can feel the lossless track has really added to the audio mix with deeper dialogue through the center.
Print Quality: 9.5/10

Rain Man successfully combines hunmor and drama and is a meaningful experience. The effects of Cruise’s character’s poor relationship with his father is portrayed well, and this type of relationship betweeen fathers and sons is all to common in real life. The ending of the film is also well done as it does not turn out to be as predictable as you might think.
Overall Rating: 9/10