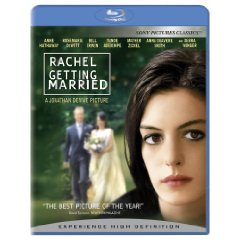 Anne Hathaway has really turned out to be an excellent actress since her days in the ‘Princess Diaries’. It is so fascinating to see her going from teen genre films to actually tackling adult oriented films in just a few years. I find that to be rather impressive with her roles in ‘The Devil Wears Prada’, ‘Brokeback Mountain’, and now ‘Rachel Getting Married’ which is both very dramatic and has its funny moments. Hathaway was nominated for an Oscar with her role as ‘Best Actress’, but she didn’t win that honor this time around. The film did receive a limited release in theaters bringing in a total worldwide gross of $13 million dollars with a budget of $12 million dollars. Thanks to an Oscar nomination, this film should do well with DVD sales and rentals.

Kym Buchman (Anne Hathaway) is a woman that has gone through so much emotional drama during her life that she tries hard to show her family that things have changed. After having spent nine months in rehab, she is ready to come home. Her father Paul (Bill Irwin) is the one to pick her up and bring Kym home for her sister’s Rachel’s (Rosemarie DeWitt) wedding. Rachel is engaged to an African American male, Sidney (Tunde Adebimpe). Then there is also their mother, Abby (Debra Winger) whose father has married her twice.  I am very happy that the writing team strayed away from any interracial issues in this film and dealt with the dysfunctional issues of the Buchanan family.

There are a lot of issues that need to be taken care of by Kym, her sister Rachel, and their father Paul. A lot of these issues stem from the film centering on Kym’s point of view and the issues she had growing up with various substances. Rachel tries to be kind to Kym, but she will always have in the back of her mind the problems that her sister caused the family so long ago. Kym tries hard to win her families affection and get their attention back albeit the past history. Kym even goes as far as trying to prove to the rest of the family that she is clean and very sorry for what she did in the past. In a nutshell if you have not gotten it from my review, this is about a family that is torn apart by multiple issues but find their way together in a very strange ending.

‘Rachel Getting Married’ takes a documentary style approach but is actually implemented in such a way that it does work here very well. This was an area that I was worried about upon hearing that Director Demme was taking this approach for filming. Everyone’s performances involved are really good as Hathaway had a really good supporting cast to work with. Hathaway was really into her role as she made you believe and feel for her character, but also the dysfunction that ran rampant with her family. She deserved the nomination for ‘Best Actress’.

With the good, there is some bad which I felt like the story was at times allover the place. That is a shame too since there are a few script and directorial choices which brings the movie down. The first twenty minutes of the film I felt like we were going nowhere with the story. Things begin to gel which the film takes off running. This is still a film worth checking out for those that like this kind of genre films.
Movie Content: 4/5 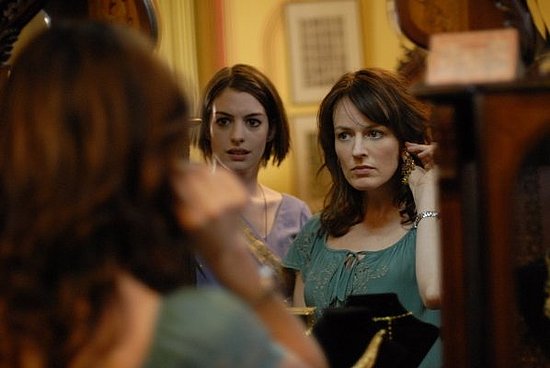 The print is presented in 1080p/AVC MPEG-4 codec with a 1.85:1 aspect ratio. I will hand it to Demme for making this unique film not come off as just another home video with a handheld. Image quality is squeaky clean with some impressive colors and details for a film that follows a documentary style presentation. Colors are vivid and bold providing a nice pop to the image. Blacks are deep. Fleshtones are natural and accurate. The image is pristine from no apparent issues.
Print Quality: 4.5/5

The audio is presented in Dolby TrueHD 5.1 mix. This is a film that you should not expect an aural experience that will take advantage of the soundfield. ‘Rachel Getting Married’ is more of a front heavy presentation with a dialogue driven mix. Dialogue came through the center channel clean with excellent depth. There weren’t many effects through the rear speakers which are is shame during the scenes with musical score. The thing is that the score wasn’t your typical score; Demme had a live band walking around playing music during the film. It just didn’t feel right with this approach.
Audio Quality: 4/5 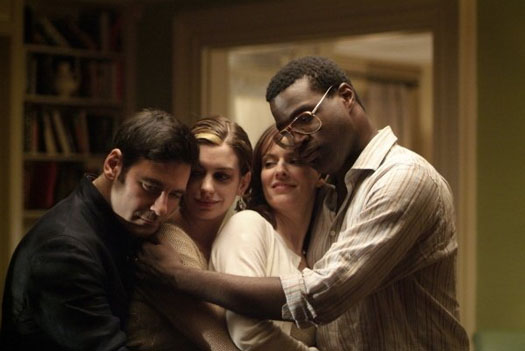 ‘Rachel Getting Married’ is a rather unique film with the style Director Demme takes on the documentary genre. Anne Hathaway does an excellent job with her role and deserves the Oscar nomination for ‘Best Actress’ for her performance. On Blu-ray, the video presentation is excellent and the best way to view this film.
Overall Rating: 4/5