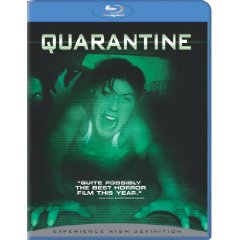 It seems like the shaky cam craze in Hollywood died off after ‘The Blair Witch Project’, only to make a return with the big budget ‘Cloverfield’. As this style of film seems to have died off rather quickly yet again, we get another film in the same sense, ‘Quarantine’. Take a little bit of ’28 Days Later’ and then sprinkle some ‘Cloverfield’ and you have the latest crazy cam film in ‘Quarantine’. While this film doesn’t bring anything new to the table in terms of story, it takes a whole different approach making this one of the more enjoyable shaky cam films. The film grossed a worldwide box office total of $36 million dollars based on a $12 million dollar budget.

The film opens up with Angela (Jennifer Carpenter) is filming a local fire department with her cameraman Steve (Scott Percival). They are making a documentary of sorts of the fire department as they take us through the fire station. Then a call comes in for the fire fighters that there is some sort of emergency. Both Angela and Steve end up going along with the fire fighters to the apartment building; they get locked in the building. The residents in the apartment building are experiencing some sort of viral infection which causes an outbreak.

At this point Angela, Steve, and Jake (Jay Hernandez) one of the fireman have to work together if they are going to survive this zombie outbreak. It becomes a fight for survival as they work their way out of the apartment complex. They do meet a few other survivors along the way, but the problem occurs when some of these survivors can’t hang with the fast moving infected as they are chewed up and turned into the dead.

I remember viewing the previews for this film before and during its theatrical run, I thought this movie looked very interesting. Upon initial viewing, I was quite surprised as to how entertaining the film was even with the use of a shaky cam. I don’t mind the shaky cam, but there are some films that I feel could have worked better without it. In ‘Quarantine’ I was at the edge of my seat the entire time. We see what the camera sees the entire time, yet this experience is creepy and freaky at the same time as you become concerned for the characters.

Speaking of characters, besides our three main characters, the rest of the cast is rather forgettable. That is ok since the focus is on Angela, Steve, and Jake trying to get out of this building. There are some surprises along the way and one at the end that is rather interesting.
Movie Content: 4/5 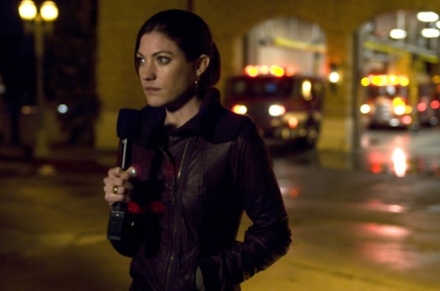 The print is presented in 1080p/AVC MPEG-4 with a 1.85:1 aspect ratio. While the film starts off rather on the dim side, things change once the fire fighters enter the apartment building. We move to a much darker looking film yet there isn’t a loss of details and a clean print. Colors look muted which look perfect for this type of film. It really makes the camera work from ‘Cloverfield’ and ‘Blair Witch’ not on the same level.
Print Quality: 4/5

The audio is presented in Dolby TrueHD 5.1 mix. This is one excellent sound mix considering that we have a film that is supposed to be from the camera’s point of view. The nice thing with the sound is that you get a true sense of atmosphere. The effects and sounds coming into the soundfield from the rears giving this film the sense of really being claustrophobic. Dialogue is clean through the center channel with no apparent issues.
Audio Quality: 4.5/5 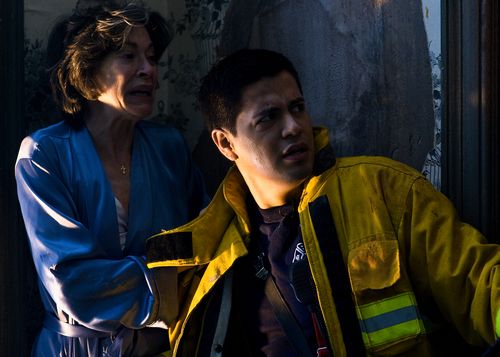 All the special features are presented in standard definition. I highly recommend viewing the extra features after the film; they really help in making more sense of certain aspects of the film.

‘Quarantine’ is a very enjoyable action/horror film that keeps you at the edge of your seat the entire time. There aren’t many films with the shaky cam style of filming that really pull the viewer into the full experience like ‘Quarantine’. The film provides excellent audio and visual experience on Blu-ray. I highly recommend this film as a purchase if you are a fan of this genre and enjoy zombie-like outbreak films.
Overall Rating: 4/5