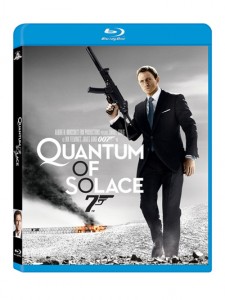 There have been many movie franchises that received a reboot over the last few years to get back to the basics. Some have failed while others have been successful. In 2006, ION Productions rebooted one of the all-time classic franchises, 007 James Bond. ‘Casino Royale’ would be the film to reboot the franchise along with a new Bond in tow, Daniel Craig replacing Pierce Brosnan. The film was the type of Bond movie that many have been yearning since the days of Sean Connery. In 2008, a new Bond film is released under the name ‘Quantum of Solace’. The film received all kinds of mixed reactions from fans and critics due to the direction the series is going in.

This is a first for the James Bond franchise that a sequel continues the story from the previous film. Some may argue that crime organization SPECTRE and villain Blofeld were a continuing part of the earlier Bond films. Things are different with ‘Casino Royale’ and ‘Quantum of Solace’ as the story is meant to cross over into the sequels and not be a self contained story like the previous Bonds. This works very well when you look at both films together. The perception of ‘Quantum of Solace’ is completely wrong with many looking on as a stand alone effort.

The theme song ‘Another Way to Die’ by Alicia Keys and Jack White is horrible. I am in disbelief that this song was used as the theme. I was not feeling this at all and I kept thinking to myself that this better not be a sign of things to come. I do like the new artsy look in the intro carry over from ‘Casino Royale’ as the theme songs plays.

‘Quantum of Solace’ begins with James Bond (Daniel Craig) in a car chase up a two car lane mountain top. The road is very narrow, and with one bump a vehicle will go over the edge. Bond is being chased up and then down the mountain through traffic. There are bullets flying, cars crashing, and all kinds of chaos that ensues during this sequence. It would not be a Bond film without a hot opening. Bond quickly dispatches his assailants one by one with a few nifty moves.

The story in ‘Quantum of Solace’ continues where we left off with ‘Casino Royale’. While I felt that the story here was on the slimmer side since they relied on the events from ‘Casino Royale’ to pull things through. Bond is on a mission to stop the organisation that has no name which caused him a great deal of trouble and heartbreak in ‘Casino Royale’. Bond is not in good graces with the British, U.S. governments and MI6 for being a ruthless/rogue like agent. Bond takes it upon himself defying M’s (Judi Dench) orders as he tries to track down this mysterious organisation. His first target becomes Dominic Green (Mathieu Amalric), whom is a manipulator and business man that takes what he wants with force.

James Bond meets Camille (Olga Kurylenko), who has an agenda of her own against a Bolivian general for what he did to her family. Both Bond and Camille share similar emotions due to tragedies in both of their pasts. Bond is heartbroken over the death of Vesper Lynd from ‘Casino Royale’. He is on a non-stop rampage to uncover as to why he was setup in ‘Casino Royale’ and the reason behind Vesper being used as a tool by the organisation against Bond. Add that M almost being killed to the list and all this is playing on his mind. I didn’t feel like there was love chemistry between both Bond and Olga. I saw them in a more brother/sister role with Bond wanting to also help her get revenge after he screwed up her plan earlier in the film.

We also have the return of Felix Leiter (Jeffrey Wright) and Mathis (Giancarlo Giannini) that both play integral parts in the film. I was glad that Wright reprised his role as Felix since he is important in the Bond world.

This new Bond is a brutal killing machine in ‘Quantum of Solace’ compared to ‘Casino Royale’. Daniel Craig does an excellent job portraying this new Bond, yet he has a lot of characteristics of Sean Connery’s Bond. He is suave, has that swagger walk, and that dead look in his eyes that also made Connery have that unpredictable look.

If there are a few things that I dislike about ‘Quantum of Solace’ is that the filming used the ‘Bourne Trilogy’ camera work. Every fight scene was close quarters with the use of one camera panned in on the action. This style of camera work was fine for Bourne, even though I am not a fan of it, but I do wish it was not used here in this film. I don’t like all the blur that occurs from this camera work, you can not see what is going on with the action. It was to a point where I thought I was viewing James Bourne in action.

With complaints aside, I have the feeling that James Bond is going to be toned down in the next or following film. ‘Casino Royale’ and ‘Quantum of Solace’ are a look into a green, young, and upcoming MI6 agent that was never explored in the previous films. The writing team is opening the doors to his origin which none of the other films ever did. He is not mature in some respects as an agent due to his ruthlessness. We may never get the Bond of the first 20 films, but I do believe that we will see a change in his character where he is less brutal on his victims as he matures. Everyone has a past before they became the man that would define them into a sleek agent. I highly recommend viewing ‘Quantum of Solace’as this is a great film in the franchise albeit some of the issues that I had with this being similar to the Bourne trilogy.
Movie Rating: 9.5/10 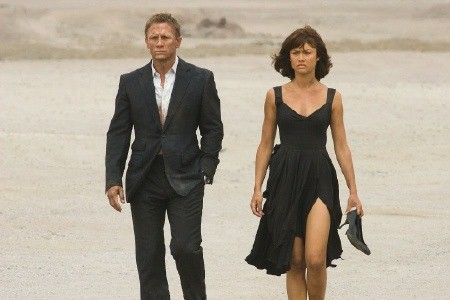 The print is presented in 1080p/AVC MPEG-4 with a 2.40:1 aspect ratio. Having seen this film twice in the theater, its debut on Blu-ray is absolutely stunning. Colors are vivid and strong in a good portion of the scenes, but there are some scenes where colors do look a bit too saturated. There is some softness in a few scenes, but nothing that hurts the print. Sharpness and details are also very good, with inky looking blacks. There is grain throughout the film, where it is lighter in a few spots and a bit heavier in others. The grain is intentional as this is how the film is intended to look gritty. Fleshtones are natural and accurate considering the color palette jumps.
Print Quality: 9.5/10

The audio is presented in DTS-HD MA lossless 5.1 mix. There is great dynamic range with this release. From the start of the film, the entire soundfield immerses you into the action. This is one aggressive mix which booms with some excellent sounding bass. Panning effects are pure bliss to the ears with whizzing bullets or the fantastic chase sequence at the beginning of the film. Dialogue is rather clear and crisp through the center channel. Both the sound effects and dialogue are equally mixed. The audio mix is demo worthy material just like ‘Casino Royale’ on Blu-ray.
Audio Quality: 10/10 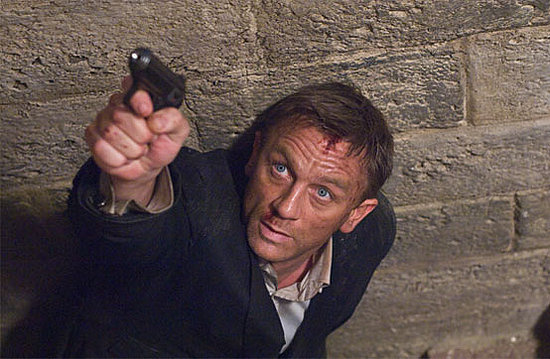 All special features are presented in high definition which is how all Blu-ray releases should be presented. By the amount of special features on this disc, I have a sneaking suspicion that double dip could be down the road. i Found “Bond on Location” featurette to be the most interesting as the director Marc Foster and producers discuss the direction of the new James Bond.
Special Features: 9/10

While there are a few small flaws with ‘Quantum of Solace’, the franchise is heading in the right direction with 2006’s reboot ‘Casino Royale’. This is a joy for Bond fans as myself that these first two films have really shown the human side of James Bond and who he was as opposed to the previous twenty Bond films which shrouded him in mystery on his past. On Blu-ray, this film is fantastic and offers a near demo quality image and audio that you will want to show off to everyone that comes to your house. I highly recommend ‘Quantum of Solace’ as a purchase for fans of James Bond and those that love action films.
Overall Rating: 9.5/10