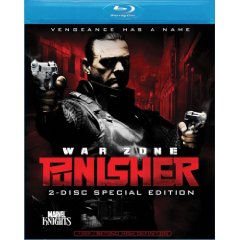 I was a huge fan of ‘The Punisher’ which released with Thomas Jane in 2004. When I heard that he had bowed out of the sequel, it left me a tad bit upset. On one end of the spectrum he played the human side of Frank Castle very well, and actually did a good job in the role of The Punisher himself. There were a few problems with his representation as the big brute The Punisher, but damn was he great for the role. In 2008’s sequel, Thomas Jane is replaced with Ray Stephenson who pulls in a nice performance, yet still not Thomas Jane. The film did poorly at the box office with only $8 million dollars and a production budget of $35 million dollars. While the original made $54 million dollars at the box office.

While the original ‘The Punisher’ had a nice amount of violence, ‘Punisher: War Zone’ turns up the violence a notch. When I mean the violence it turned up a notch, it is taken to the extreme which will make Punisher fans extremely happy. Frank Castle/The Punisher (Ray Stephenson) bursts on the scene as ‘The Punisher’ with only minor flashbacks throughout the film to explain things again for those that may have missed the original film or doesn’t know a thing about the comic lore. In the original, the villain of the film was Howard Saint (John Travolta) which many disliked, but he played the role fairly well. In this sequel, Billy Russoti/Jigsaw (Dominic West) plays the villain and does one hell of a job. As we see his transformation from Billy Russoti to the maniacal Jigsaw was just excellent. Jigsaw has always reminded me of The Joker from Batman.

The film is set nearly six years after the original. The film begins with a bang as The Punisher comes crashing into a mob meeting held by Gaitano Cesare. All this chaos ends up leading to The Punisher making pizza out of Billy Russo’s face and killing an undercover agent accidentally. Not only does The Punisher have the police, FBI, and Agent Paul Budianksy (Colin Salmon) on his tail, but he also has Jigsaw to contend with. Jigsaw conspires a master plan to get together all of the gangs in the city to take down The Punisher.

I enjoyed ‘Punisher: War Zone’ from start to finish, yet there were many times throughout the film that I missed Thomas Jane as The Punisher. Ray Stephenson did a good job in the role, but there was something off with his one-liners that hurt his character. Stephenson does nail Castle/The Punisher very well in the persona department from the stone cold dead looks to the use of weaponry and mannerisms.

The violence is brought up several notches also from the previous two films. Even CGI was used to help make the blood look even more effective. The graphic nature of the film is at an all-time high with gore making this film feel like it was ripped right out of the comic books. This will make Punisher comic book fans very happy.
Movie Rating: 8/10 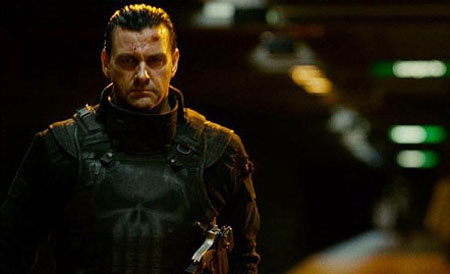 The print is presented in 1080p/AVC MPEG-4 with a 2.35:1 aspect ratio. ‘Punisher: War Zone’ is a very stylistic film that is intentionally made to look like it was ripped out of the pages of on the comic book pages. The color palette won’t be one to pop off the screen, but also will not disappoint. Black levels provide some excellent depth. Scenes up close and when the camera pans away show provide stunning details. This film’s image is meant to represent a comic book as the audio commentary indicates.
Print Quality: 9/10

The audio is presented in DTS-HD MA lossless 5.1 mix. This is a demo worthy mix that could easily sell those on the fence about the format. The soundfield is immersive at all times no matter if it is the special effects or dialogue. I was literally amazed with the amount of bullets panning from each speaker in the rears. It sounded as if there were bullets ricocheting off of the walls in the room. Bass was punchy as it shows with the amount of gunfire and explosions. Dialogue is also well placed in the center channel sounding crisp and clear.
Audio Quality: 9.5/10 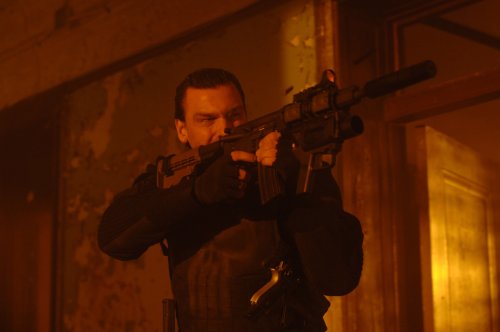 ‘Punisher: War Zone’ is a great entry in the Marvel line of superhero films. I do hope that we do see a sequel sooner than having to wait another four years. While there are many good points to the film, but there are also a few times where the script goes south making the viewer feel bored. On Blu-ray, the video and audio is excellent providing another great release by FOX in high definition. For fans of Marvel, The Punisher, and superhero films I highly recommend this latest entry in the franchise. This film is on par with the 2004 release and much better than the 1989 “The Punisher’ film with Dolf Lungdren.
Overall Rating: 8.5/10