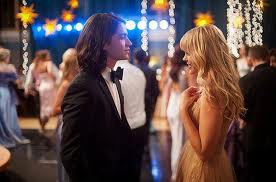 At “Prom”, every couple has a story and no two are exactly alike. For Nova Prescott (Aimee Teegarden), it’s a classic tale of opposites attracting when she finds herself drawn to the guy (Thomas McDonell) who gets in the way of her perfect prom. Share the laughter and the drama as secrets are brought to light, seemingly steady relationships unravel and new romance catches fire. Get ready for this hilariously heartfelt date with destiny featuring a hot ensemble cast of rising young stars and cool bonus features. There are hundreds of nights in high school, but there’s only one Prom. 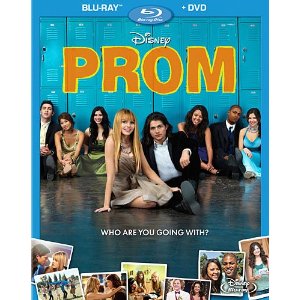 Prom is from Walt Disney Studios, and is rated PG. That should have conveyed a lot of information to prospective viewers. You can’t expect the characters to reflect the darkest depths of any high school population–no cussing, no sex, no drinking, and no drugs. And you’d do well to be prepared for some corny and idealized moments.

But, considering this movie’s upfront identity and obvious target audience, people are unjustifiably harsh towards it. This movie knows what it is, and what it is is nothing to be ashamed of! It’s cute and fun and still manages to possess relatability and discernible depth.

The fact that this movie doesn’t delve into the truly bad and ugly doesn’t make the characters that ARE presented any less real. We all know/knew the star athlete and the “it” girl, the loner and the oddball, the stellar student and the awkward kid, the gossip and the forever couple. They’re all there. I love every character because they’re relatable, and those meant to be likable are. It doesn’t hurt that I think the newcomer cast is excellent. I especially hope to see more from the actors playing Lloyd, Nova, and Jesse. The parents are represented here, too, and we know them as well: the protective dad, the mom who works her tail off to support the family, and the open-minded, uncritical mom…Parents being given presence and some substance in teen flicks is rare and refreshing. The movie even got the clothes and music right. (And the soundtrack is great!) I can’t say the same about others of its kind, whose crew didn’t seem to have stepped foot in a high school of today.
Movie Quality: 7/10

The print is presented in 1080p/AVC MPEG-4 with a 1:85:1 aspect ratio. The picture quality is excellent providing the best image out of all three films. The colors are vibrant and vivid; after watching the film on Blu-ray, the DVD version doesn’t even come close. The colorful choices on costume design and set design really help in giving this print a 3D pop. Black levels are deep.
Print Quality: 9/10

The audio is presented in a DTS-HD MA l0ssless 5.1 mix. This film is a dialogue driven film. Dialogue was clean through the center channel with a nice degree of depth. I never had to raise or lower the volume to make out what was being said. The soundfield does get a few effects into play, but nothing major. The soundtrack takes advantage of the soundfield with audio also pouring through the rears.
Print Quality: 8/10

Ultimately, this movie isn’t about prom. It’s about what prom stands for in the lives of each of the characters, and it’s the setting for the culmination of every student’s four-year journey of personal and social development..
Overall Rating: 7/10