Posted in DVD Reviews by George Theofanopoulos on 09 September 2011

The fourth season of Private Practice lays out its themes in the first episode, as all the main characters stand over the graves of characters who died in season three: new beginnings and second chances (oh, and sex–lots and lots of sex). Violet (Amy Brenneman) and Pete (Tim Daly) announce their impending marriage, which startles Cooper (Paul Adelstein) and Charlotte (KaDee Strickland), who are engaged but have yet to set a date. Addison (Kate Walsh) has started a relationship with Sam (Taye Diggs) but is keeping it under wraps lest it damage her friendship with Naomi (Audra McDonald). And psychiatrist Sheldon (Brian Benben) has become a series regular, along with neurosurgeon Amelia (Caterina Scorsone)–a very good move on the part of the show’s producers. Everyone’s a little older but still preposterously good-looking. Hot-button topics include gender-reassignment surgery, autism, fertility issues, closeted gay husbands, and much, much more–as ever, Private Practice crams as many dramatic story lines into every episode as possible. 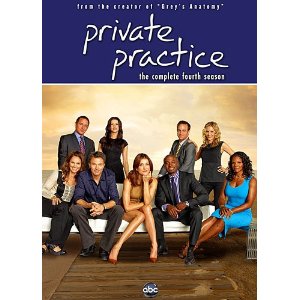 This season of Private Practice was just overall amazing. When i started Private Practice, it was only because of Addison, who was my favorite character on Grey’s Anatomy. I thought the first season was pretty good, so i kept watching. BUT, season two was complete crap. I almost stopped watching, but after the cliffhanger at the end, i had to watch season three, and I am very happy i did, cuz season three was great, and i got back to loving it.

With the ending of Dell’s death, you don’t think anything worse could happen to these people, but in the 7th episode, Charlotte gets raped, which was so hard to watch. She was one of my favorites and seeing this happen to her almost put me in tears, the show definitely gained attention for this story arc. The rest of the season deals with her coping with it all, and how it affects everyone around her. I still don’t really like Amelia Shepherd though, she is very annoying. Also, one of the main characters leaves the show at the end.
Movie Content: 9/10

On the whole, the season was awesome! Interesting patient storylines as well. This is a great season, so definitely buy it, and watch for season 5.
Overall Rating: 8/10