Princess And The Frog Blu-ray Review 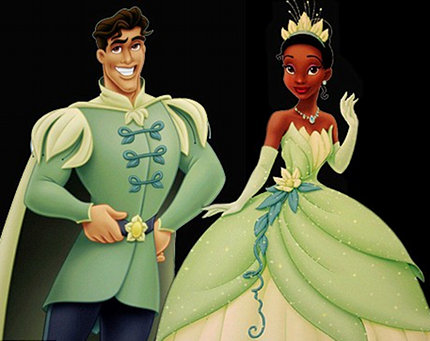 After the visual bombast of many contemporary CG and motion-capture features, the drawn characters in The Princess and the Frog, the Walt Disney Studio’s eagerly awaited return to traditional animation, feel doubly welcome. Directed by John Musker and Ron Clements (The Little Mermaid, Aladdin), The Princess and the Frog moves the classic fairy tale to a snazzy version of 1920s New Orleans. Tiana (voice by Anika Noni Rose), the first African-American Disney heroine, is not a princess, but a young woman who hopes to fulfill her father’s dream of opening a restaurant to serve food that will bring together people from all walks of life. Tiana may wish upon a star, but she believes that hard work is the way to fulfill your aspirations. Her dedication clashes with the cheerful idleness of the visiting prince Naveen (Bruno Campos). A voodoo spell cast by Dr. Facilier (Keith David) in a showstopping number by composer Randy Newman initiates the events that will bring the mismatched hero and heroine together. However, the animation of three supporting characters–Louis (Michael-Leon Wooley), a jazz-playing alligator; Ray (Jim Cummings), a Cajun firefly; and 197-year-old voodoo priestess Mama Odie (Jenifer Lewis)–is so outstanding, it nearly steals the film. Alternately funny, touching, and dramatic, The Princess and the Frog is an all-too-rare example of a holiday entertainment a family can enjoy together, with the most and least sophisticated members appreciating different elements. The film is also a welcome sign that the beleaguered Disney Feature Animation Studio has turned away from such disasters as Home on the Range, Chicken Little, and Meet the Robinsons and is once again moving in the right direction.

In an age when most animated films are computer generated (including those produced by Disney), “The Princess and the Frog” comes along, and it’s like witnessing a rebirth. First and foremost, it marks the return of traditional hand-drawn 2-D animation, a process Disney has not used since 2004’s “Home on the Range.” It’s once again possible to see an animated film and really appreciate the artistry that went into it – the backgrounds, the color schemes, the articulation, the lighting, the special photographic effects, the form of the line. It doesn’t matter that many of the old time animation techniques have been replaced with computers, including the cels and the Ink and Paint department; the style remains true to the classic Disney animated films, as does the manual use of pencil and paper.

The film also marks the return of the animated Disney musical, with a playful and jazzy collection of songs by Randy Newman that play true to the story’s New Orleans setting. While nowhere near as memorable or charming as such Disney standards as “Under the Sea,” “Be Our Guest,” “A Whole New World,” or “Colors of the Wind” (all scored by Alan Menken, who probably would have been a much better choice for this film), they hold their own in “The Princess and the Frog,” expanding the settings and allowing the characters to be even more expressive and appealing.

The plot is perhaps formulaic. But then again, even the most beloved Disney animated films, from “Snow White and the Seven Dwarfs” to “Cinderella” to “Beauty and the Beast,” made use of formulaic plots, so I don’t see any reason for reinventing the wheel. A reinterpretation of the classic fairy tale “The Frog Prince,” it tells of a hard-working waitress named Tiana (voiced by Anika Noni Rose) who dreams of someday opening her own restaurant and doesn’t put all her effort into wishing on a star. One day, she crosses paths with the broke Prince Naveen of Maldonia (voiced by Bruno Campos), who was hexed by the conniving voodoo practitioner Dr. Facilier (voiced by Keith David) and turned into a frog. Naveen, believing Tiana to be a princess, begs her to kiss him so that he will return to human form. She agrees to help, but because she isn’t royalty, the hex backfires – both Tiana and Naveen are now frogs.

I was especially taken with Dr. Facilier, the most stylish and entertaining Disney villain since Hades from “Hercules.” Imposingly tall, sinisterly thin, and with an appropriately outrageous getup, he’s given the nickname The Shadowman, and for good reason: Much like Gary Oldman’s version of Dracula, his shadow is an entity unto itself, able to move freely away from his body and move objects by clutching onto their shadows. His song is delightfully scheming and given some of the best visual treatments, with puffs of lavender smoke swirling mysteriously as voodoo masks come to life and chant in harmony. His manipulation of a deck of tarot cards is fascinating; it’s always fascinating to watch a slight-of-hand master at work, even if he happens to be a cartoon character. I leave it to you to discover his evil intentions, but chances are you already have a pretty good idea.

“The Princess and the Frog” delivers just about everything you’ve come to expect from a Disney animated film, from the romance between a prince and a commoner to the struggle between good and evil to the belief in dreams someday coming true. But in all honesty, I didn’t go into this expecting an original story with newly explored themes; what I was expecting was a fun movie with good characters, and that’s exactly what I got. And the artwork is just extraordinary, especially during a fantasy sequence revealing Tiana’s vision of her restaurant; stylistically simplistic yet expressive, it evokes the look and feel of a colorful storybook drawing come to life. The scenes in the swamp are also striking, not only because of the actions that take place but also because of the attention to detail, right down to the algae skimming the surface of the water. This is a bright, charming movie, a definite must-see for the entire family.
Movie Content: 9.5/10

The print is presented in 1080p/VC-1 with a 2.35:1 aspect ratio. “The Princess and the Frog” is a really colorful movie and the characters are really smooth looking for a film using 2D animation. The image is image is unbelievably clear and super sharp. The colors pop off of the screen for even an older animation, it brings out the details in the animation. Some good examples of fine details, look at the foilage, you can see the lush environments. Animations have been looking so wonderful on Blu-ray and this film is no exception.
Video Quality: 9.5/10

The audio is presented in DTS-HD MA lossless 5.1 mix. The sound is rather impressive and I wasn’t even expecting going in. It takes advantage of the soundfield with the rears actually getting a good workout with the soundtrack and effects. The sound from the fight scenes is also well done. Dialogue is well placed through the center channel with voices being so ever clear.
Audio Quality: 9.5/5

this is quite a breath of fresh air in the Disney princess stories, and hopefully signals more creative and unique stories (with equally unique and strong female leads) to follow. I was pleasantly surprised with this film on Blu-ray and how beautifully 2D animation can still look in this day and age of 3D.
Overall Rating: 9.5/10