Executive producer Robert Rodriguez (Grindhouse, Spy Kids) is the driving force behind this energetic reboot of the popular Predator films, which pits the dreadlocked alien hunters against a rogues’ gallery of human antiheroes, led by a bulked-up Adrien Brody. The Oscar winner acquits himself nicely in the role of a gritty mercenary who finds himself stranded on a jungle planet with a host of criminals and professional killers (among them such scene-stealers as Walton Goggins and Danny Trejo), as well as a seemingly innocent doctor, well played by Topher Grace. They’ve been deposited there to serve as living targets for a horde of Predators–whose looks, designed by Gregory Nicotero and Howard Berger, are impressively varied and sleek–that use the planet as their private hunting grounds. Laurence Fishburne is also on hand as a soldier who has managed to survive for years in the jungle; he, Brody, and Grace do much to make the pulpy dialogue by Alex Litvak and Michael Finch (adapting a premise penned by Rodriguez in the mid-’90s) palatable. Likewise, Hungarian director Nimrod Antal (Vacancy) lends a great deal of atmosphere and Rodriguez-style momentum to the picture–perhaps more than necessary, since the end result is, like the 1987 original with Arnold Schwarzenegger, a fun B-movie and nothing more, designed entirely to give moviegoers a slick, unchallenging roller-coaster ride. Having said that, it’s a vast improvement over the 1990 sequel and the dreadful tie-ins with the Alien franchise, and should provide movie monster aficionados with an afternoon’s worth of thrills. 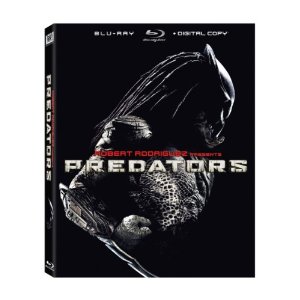 They awaken in a jungle, one unfamiliar to any of them. They’re the best of the best. They’re trained to kill. They have one-word names like Royce and Cuchillo and Mombasa. And they’re all about to be hunted by a race of alien predators unlike anything they’ve ever imagined.

Considering that the franchise has only two real films (I’d rather discount the “ALIEN” tie-ins if it’s all the same to you), and only one of those was really any good (admit it!), “Predator” has been pretty damn popular. You know the name brings with it sci-fi action/adventure, with a good dash of horror. Artfully, none of the “Predator” films (this one included) could possibly stand up to the first “ALIEN”, even though they have all tried to do so. But you don’t watch a “Predator” film for art. You watch it for the fun.

And “Predators” is fun. Plain and simple. Lending the project credibility with his serious acting chops (mostly on hold here; he’s camping it up with delight) is Adrien Brody, one of the more unlikely action heroes (though he carried his own in “King Kong”, remember). We’ve got Alice Braga as a tough-as-nails chick with attitude, Danny Trejo as a Mexican mercenary, and Laurence Fishburne giving a surprisingly good turn as a man who’s been in-country a mite too long. (It’s interesting to see Fishburne and Brody, two genuinely good actors, playing off each other; kind of makes you wish there was more of that, but then again, that would be a whole different movie.) We’ve got the prerequisite Japanese, Russian, and African toughies, and Topher Grace as a wise-cracking doctor. (Grace is another highlight, at least until the final quarter of the film, and even then, I blame the writers.) The Predators themselves look great–and we’ve got quite a variety, too. I won’t say the filmmakers have given them any emotional depth (they’re freakin’ Predators, man!), but it’s nice to see some diversity. And what a killer climax.

Overall, the film borrows heavily from the first, and that’s okay–it’s done with a wink and a nod. They know it, you know it, let’s get it out of the way and have some fun. The atmosphere is tense, the cinematography spectacular, the pace adequately suspenseful. The script falters a bit, and there’s a “twist” near the end that is entirely pointless, and generally weighs the film down. Still, for what it is–and that isn’t much, granted–“Predators” is a fine way to kill a Saturday evening. Leave it to producer Robert Rodriguez to put a little umph back into a dying franchise, though one can’t help but wonder what the film would’ve been like if Rodriguez had chosen to write/direct it as well.
Movie Content: 9/10

The print is presented in 1080p/AVC MPEG-4 with a 2.40:1 aspect ratio. 20th Century FOX offers up yet another excellent looking film on Blu-ray. This is one film that has many darker and light scenes with many colors standing out. The color palette varies from strong, lush, and bright looking. The reason is due to the film’s nature, certain colors such as reds, green, and grays stand out the most. Black levels are deep with an ink like look. Details are excellent providing various sense of depth. Scenes up close and when the camera pans away show provide stunning details. This is a great example of how darker looking films in this genre can look if done right.
Video Quality: 9/10

The audio mix is presented in DTS HD 5.1 Master Audio lossless track. This is a demo worthy mix that could easily sell those on the fence about the format. The soundfield is immersive at all times no matter if it is the special effects or dialogue. I was literally amazed with the amount of bullets panning from each speaker in the rears. It sounded as if there were bullets ricocheting off of the walls in the room. Bass was punchy as it shows with the amount of gunfire and explosions. Dialogue is also well placed in the center channel sounding crisp and clear. The best part of this all around aggressive soundtrack is that it is well balanced between the dialogue and sound effects.
Audio Quality: 9.5/10