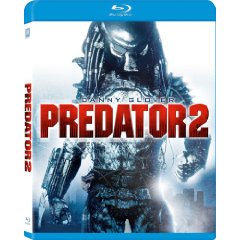 Predator wreaked havoc in the jungle and struck box-office gold, so Hollywood logic dictated that Predator 2 should raise hell in the big, bad city. Los Angeles, to be specific, and this near-future L.A. (circa 1997) is an ultra-violent playground for the invisibility-cloaked alien that hunted Arnold Schwarzenegger in the previous film. Scant explanation is given for the creature’s return, and because Ah-nuld was busy making Total Recall, Danny Glover was awkwardly installed as the maverick cop (is there any other kind?) who defies a government goon (Gary Busey) to curtail the alien’s inner-city killing spree. But why bother, when the victims are scummy Colombian drug lords? Don’t look for intelligent answers; director Stephen Hopkins favors wall-to-wall action over sensible plotting, allowing Stan Winston’s more prominently featured Predator to join the ranks of iconic movie monsters. And anticipating Alien vs. Predator in comic books and in theaters, there’s a familiar-looking skull in the Predator’s trophy case!

Opening with the gang war between the Columbians and the Jamaicans in downtown L.A., you know that this movie is way different from the first movie that took place in the rain forests of Central America. But one thing’s for sure, this movie is going to have action.

This movie takes place in the year 1997, which is now in our past but then future since it was made in 1990. Even with that said, this movie gives a good look at our possible future. The pollution has really caused the Green House Effect to become a bigger problem as they sweat constantly on this movie. This is just the right environment for a Yatja, better known as a Predator, since they love humid/hot environments. That is why they are in Central America.

Unlike “Predator,” you don’t really learn as much about the characters (except for Glover) and you don’t really get to see the full spectrum of their personalities or grow any kind of attachment to them. There again, it may just make the idea of killing the other characters easier, so that doesn’t really detract from the movie. The Predators themselves are realistic and as gruesome and ugly as ever, and Stephen Hopkins really succeeds in maintaining the pragmatic and “dirty” look of the Predators. Hopkins certainly keeps the franchise afloat with this movie that adds to the mythology behind the Preds. We find out that they are actually social creatures and have spaceships and customs like human beings. In this way we learn more about the Predators and find that they are complex, ancient beings that are, in some ways, more similar to humans than we previously thought. The movie gets 5/5 for maintaining the franchise and giving us a greater insight into the social structures of the Predators.

Not only are we introduced to new concepts about the social and traditional aspects concerning Predators, but also some new weapons! This is the first time we see the “Disc” weapon, which seems to have a built-in guidance system and seems capable of slicing through most materials. Harrigan actually steals and wields this weapon on the hunting Predator later on in the movie. We also see that Predators have more than one or two modes of vision, which is also interesting. This Predator also uses a different Med kit to the one in the original movie, which is pretty interesting as this Pred burns the wounds shut rather than suturing as in the first movie. And of course there are the normal weapons like the classic wristblade, spear and shoulder cannon. Hopkins has truly expanded on the story of the Predators and for that he is to be highly commended.

Overall it’s not quite as good as the first, but it’s still pretty strong and certainly won’t disappoint fans. It lacks a little due to some small factors and just doesn’t quite have the same appeal as the first movie, but that aside, it’s very good.
Movie Content: 8.5/10

The print is presented in 1080p/AVC MPEG-4 with a 1.85:1 aspect ratio. Colors are strong with nice deep blacks. There is minimal grain throughout, while there are scenes with no grain. There is some noise filtration that has been done to this print. Details are decent, good in some scenes and average in others. My one problem is that fleshtones did not look as natural in some scenes, carrying more of a hot pink/red at times. There is Edge Enhancement in a few scenes throughout the presentation. Having owned this film on VHS, several DVD releases, and broadcast television this was a real treat on Blu-ray.
Video Quality: 8.5/10

The audio is presented in DTS-HD MA lossless 5.1 mix and boy does this catalog title come at a surprise. It’s fairly aggressive surprisingly with some panning affects where if you listen closely, you can hear bullets whizzing by. The sound comes out of the rears very clear and even better is that the dialogue is balanced very well with the soundfield mix. Not once did I have to turn up the volume during the scenes with dialogue.
Audio Quality: 9/10

‘Predator 2’ is a guilty pleasure of mine being a huge fan of the franchise. I was surprised that the audio and video turned out so well for a 19 year old catalogue. All special features from the special 2-disc set DVD were ported over to the Blu-ray. I highly recommend the Blu-ray as an upgrade over both DVD releases.
Overall Rating: 8.5/10