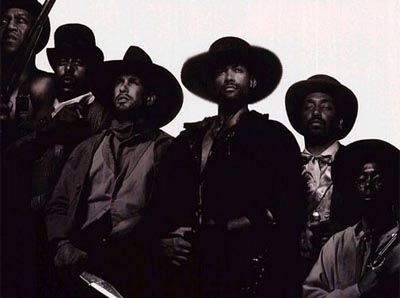 Mario Van Peebles directed as well as starred in this ham-fisted, 1993 Western with a predominantly African American cast. The story finds a posse of black shooters (with one white member, played by Stephen Baldwin) taking on a racist sheriff and military man, but Van Peebles’s effort at mixing convention with hip credentials gets pretty grating. (Tone Loc makes the worst cowboy in film history.) The film is also incredibly sexist, going well beyond the usual frontier-floozy clichés and lapsing into the sort of blatant exploitation one found at that time in rap-music videos. There are lots of cameo appearances from familiar folks willing to support Van Peebles on a project that probably sounded like a mix of experiment and event–Pam Grier, Isaac Hayes, Woody Strode, and the director’s father, Melvin Van Peebles. But even they can’t help. 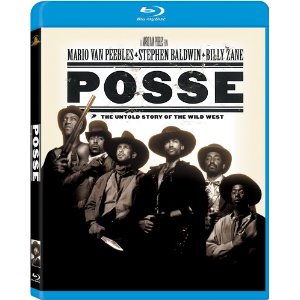 Mario Van Peebles directed and starred in this film about a group of African-American soldiers (and one white one) on the run from a corrupt military officer. The officer (Billy Zane) had the posse steal some gold from Cuba during the Spanish-American War. He planned to kill them afterwards, but the group proved stronger than he thought and they escaped. They come back to the states and follow Jesse (Van Peebles) to the dream town of his deceased father in west Texas. Jesse has some inner demons to silence and they won’t be still until he has settled an aged score.

The film is interesting. However, the movie relies heavily upon typical Western cliches which dampen some of the it’s uniqueness. Nevertheless, the film does raise awareness about all the black cowboys and settlers that were so instrumental in taming the West that most people don’t even know existed. An educational film that is quite entertaining to watch.
Movie Quality: 9/10

The print is presented in 1080p/AVC MPEG-4 with a 2:35:1 aspect ratio. Colors are strong throughout looking great which I did not expect. Black levels are not that great which this print would have benefited from greatly. Clarity is decent with details being a huge improvement over the DVD release. There is some grain which is consistent. The one issue with this release is the dirt and white specs that are present. I will give props for a well done transfer which I didn’t expect.
Print Quality: 9/10

The audio is presented in a DTS-HD Master Audio lossless 2.0 mix. This mix is good for being DTS-HD MA 2.0 providing good separation with the action scenes. This film could have benefited from a 5.1 mix and just a shame that it wasn’t. Dialogue comes through the center channel very clear and crisp.
Print Quality: 7.5/10

Mario Van Peebles “Posse” is a movie with flaws, but it treats its source material with respect. Unlike the shallow and silly “Rosewood” Van Peebles “Posse” gives viewers a clear picture of what life was like for African-American cowboys at the turn of the century. We get to know characters in the story. The production values are low budget, and several roles are miscast, but Van Peebles’ heart is in every second of this film.
Overall Rating: 7/10